The Latest: Erdogan tells Putin that Israel needs a ‘lesson’ 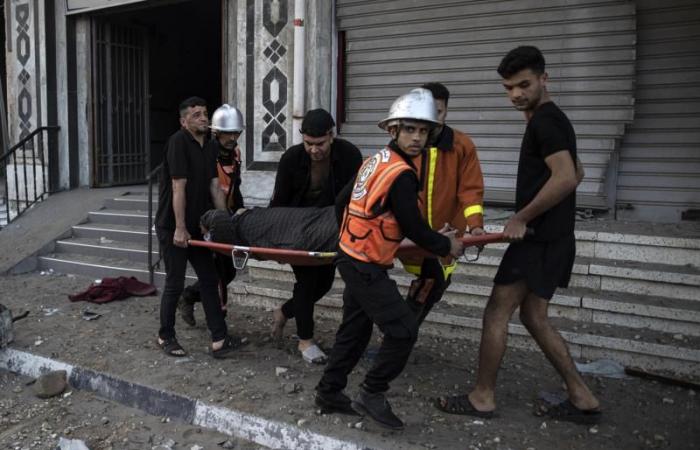 You are now following the details of the The Latest: Erdogan tells Putin that Israel needs a ‘lesson’ news and now we leave you with the details

Mohamed Nass - Cairo - JERUSALEM (AP) — The Latest on confrontations between Israelis and Palestinians as Israel signals a widening military campaign:

ANKARA, Turkey —Turkish President Recep Tayyip Erdogan has told Russian President Vladimir Putin that the international community should “give Israel a strong and deterrent lesson” against its conduct toward the Palestinians.

That’s according to the Turkish Presidential Communications Directorate, which said the two leaders talked by phone Wednesday about the escalating confrontation sparked by tension over contested Jerusalem.

The statement said Erdogan stressed the need for “the international community to give Israel a strong and deterrent lesson” and pressed for the United Nations Security Council to rapidly intervene with “determined and clear messages” to Israel. The statement said Erdogan suggested to Putin that an international protection force to shield the Palestinians should be considered.

Meanwhile, thousands of people in Istanbul defied a nationwide coronavirus curfew late Tuesday to demonstrate against Israel’s attacks. A large convoy of cars drove toward the Israeli Consulate, waving Turkish and Palestinian flags. An image of the Palestinian and Turkish flags was projected onto the Israeli building.

ISLAMABAD, Pakistan — Pakistan condemned Israel’s actions and called for Muslim nations to stand by the Palestinians.

Protesters are expected to hold a small anti-Israel rally later today in the southern city of Karachi.

GAZA CITY, Gaza Strip — The Gaza Health Ministry says the death toll from Israeli airstrikes on Gaza has climbed to 43, including 13 children and three women.

It says nearly 300 Palestinians in the territory have been wounded in the strikes.

The strikes began Monday as Palestinians launched a barrage of rockets into Israel. The worst fighting since the 2014 Gaza war was ignited by clashes in Jerusalem in recent weeks between Palestinian protesters and Israeli police focused on the Al-Aqsa Mosque compound, a site sacred to Jews and Muslims.

The head of Israel’s emergency service also says one person has been killed and one seriously wounded by an anti-tank missile fired from the Gaza Strip.

JERUSALEM — The head of Israel’s emergency service says one person has been killed and one seriously wounded by an anti-tank missile fired from the Gaza Strip.

The attack came after a night of deadly exchanges of rocket fire between Israel and Palestinians. It was an abrupt escalation of weeks of tension with roots in disputed Jerusalem.

Image: Palestinian rescuers evacuate an elderly woman from a building following Israeli airstrikes on Gaza City, Wednesday, May 12, 2021. Rockets streamed out of Gaza and Israel pounded the territory with airstrikes early Wednesday as the most severe outbreak of violence since the 2014 war took on many of the hallmarks of that devastating 50-day conflict, with no endgame in sight. (AP Photo/Khalil Hamra)

These were the details of the news The Latest: Erdogan tells Putin that Israel needs a ‘lesson’ for this day. We hope that we have succeeded by giving you the full details and information. To follow all our news, you can subscribe to the alerts system or to one of our different systems to provide you with all that is new.