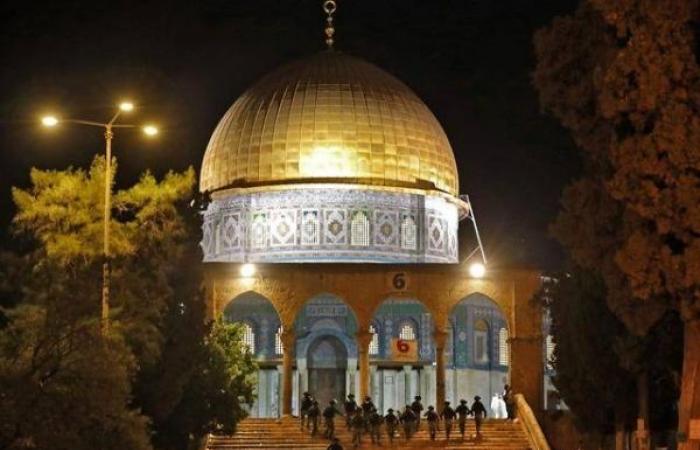 Hind Al Soulia - Riyadh - NEW YORK — The UN Secretary-General said he was "gravely concerned" over the escalating violence in the occupied Palestinian territory on Tuesday, while the UN rights office, OHCHR, appealed for “a redoubling of efforts to restore calm”, after airstrikes and days of clashes between protesters and Israeli police.

The ongoing violence marks a dramatic escalation of tensions linked to the potential eviction of Palestinian families from East Jerusalem by Israeli settlers and access to one of the most sacred sites in the city, which is a key hub for Islam, Judaism and Christianity.

UN Secretary-General António Guterres expressed his deep concern over the situation, including the escalation of violence in Gaza, "which add to the heightened tensions and violence in occupied East Jerusalem", the statement issued by his spokesperson said.

"He is deeply saddened to learn of increasingly large numbers of casualties, including children, from Israeli airstrikes in Gaza, and of Israeli fatalities from rockets launched from Gaza. The secretary-general’s thoughts are with the families of the victims."

He called on Israeli security forces to "exercise maximum restraint and calibrate their use of force", adding that "indiscriminate launching of rockets and mortars toward Israeli population centers is unacceptable."

Guterres said the United Nations was working "with all relevant parties to de-escalate the situation urgently."

In Geneva, UN rights office spokesperson Rupert Colville cited reports that more than 900 Palestinians had been injured between May 7 and May 10 in East Jerusalem, and over 200 in the West Bank, “most by Israeli security forces”, some of whom had also been hurt.

Palestinian armed groups, meanwhile, had launched “some 250 rockets towards Israel in the past 24 hours” with at least 17 Israeli civilians reportedly injured, the OHCHR official said.

This use of indiscriminate weapons “is strictly prohibited under international humanitarian law and must stop immediately”.

Airstrikes had been carried out in Gaza by Israeli Defense Forces, Colville continued, citing reports that 24 Palestinians had been killed, including nine children and one woman.

“Israel must respect international humanitarian law, in particular, the cardinal principles on the conduct of hostilities, namely distinction, proportionality, and precautions”, he said. “Any attack, including airstrikes, should be directed solely at military objectives and all feasible precautions must be taken to avoid civilian deaths and injury and damage to civilian objects.”

The development follows protests in Jerusalem at the potential imminent eviction of Palestinian families from the Sheikh Jarrah and Silwan neighborhoods, as the holy month of Ramadan comes to an end and as families break their daily fast with their evening meal or iftar.

“Certainly, what we are seeing is extremely worrying and certainly when you see the treatment to some of the protesters and even people who weren’t protesting”, said Colville. “People who were simply praying or people who were having their iftar, who’ve been subjected to violence or completely unprovoked responses by the security forces.”

According to the UN agency responsible for assisting Palestinian refugees, UNRWA, eight Sheikh Jarrah families are under threat of eviction, in all, around 75 people.

“These families are Palestine refugees, who lost both their original homes and means of livelihood as a result of the 1948 conflict”, UNRWA said in a statement. “In 1956, these refugee families moved into Sheikh Jarrah with the support of the Jordanian government and material assistance from UNRWA following their displacement. They have resided in these homes for nearly 70 years. They are now at risk of being displaced for the second time in living memory.”

Asked by journalists at a regular UN Geneva briefing about the Israeli security forces’ actions towards Palestinian protesters, the OHCHR spokesperson noted that “in some instances, particularly when the police entered the Haram Al-Sharif/Temple Mount compound using tear gas, stun grenades, sponge-tipped bullets, physical force and in some cases, that appeared unwarranted, disproportionated or indiscriminate.”

Two top UN-appointed independent rights experts added their voice to concerns on Tuesday over Israel’s “aggressive response” to protests in East Jerusalem, before calling on Israel “as the occupying power”, to immediately lift eviction threat from hundreds of Palestinian households.

“Re-establishing calm in Jerusalem is important, but creating the conditions for justice and equality in the city are even more important”, said Michael Lynk, Special Rapporteur on the situation of human rights in the Palestinian Territory occupied since 1967 and Balakrishnan Rajagopal, Special Rapporteur on adequate housing as a component of the right to an adequate standard of living.

“Neither short-term calm nor long-term peace will be accomplished as long as the national and individual rights of the City’s Palestinian population are routinely abrogated,” they said, noting that Israel occupied East Jerusalem, along with the West Bank and Gaza, in 1967.

“Over the past five decades, it has built 13 settlements, housing more than 220,000 Jewish settlers, in East Jerusalem,” the experts said, insisting that two “inherently discriminatory” Israeli laws were used as the basis for the eviction threat of Palestinians.

The UN Humanitarian Coordinator for the region, Lynn Hastings, issued a statement calling for the escalation in fighting to stop “to avoid more deaths and injuries.”

She said needs would likely rise in the Gaza Strip, especially with the drain on healthcare due to the ongoing COVID-19 pandemic, while the movement of humanitarian personnel and the entry of goods subject to the Israeli blockade, “must be continuously allowed.”

“All parties have obligations under international humanitarian law; the principles of distinction, precaution and proportionality in the use of force, must be adhered to”, she said. “Airstrikes in densely populated areas, risk violating these principles.” — UN news

These were the details of the news UN chief 'gravely concerned' as violence escalates in occupied Palestinian territory and Israel for this day. We hope that we have succeeded by giving you the full details and information. To follow all our news, you can subscribe to the alerts system or to one of our different systems to provide you with all that is new.