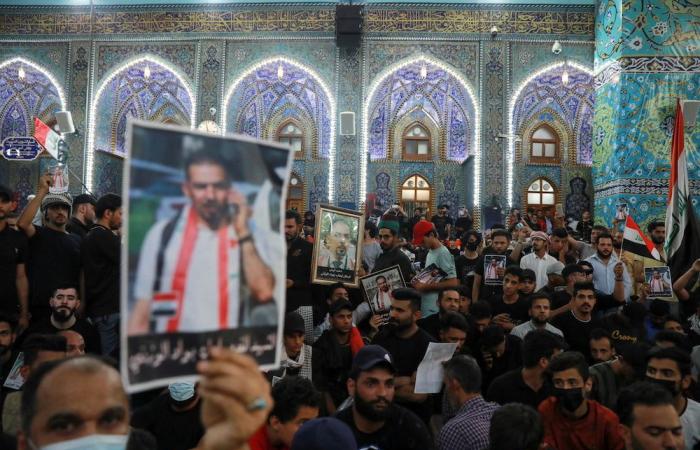 KARBALA, May 10 — An Iraqi journalist was in intensive care after being shot in the head early Monday, doctors said, only 24 hours after a leading anti-government activist was killed.

Anti-corruption campaigner Ehab al-Wazni was shot dead early Sunday in Karbala, sending protest movement supporters onto the streets to demand an end to such bloodshed and official impunity.

He was shot overnight outside his home by men on motorbikes using a gun equipped with a silencer, in an ambush caught on surveillance cameras. His death was confirmed by security forces and activists.

Hours after his death, reporter Ahmed Hassan was in intensive care after receiving “two bullets in the head and one in the shoulder,” a doctor told AFP.

“He was targeted as he got out of his car to go home,” in Diwaniya in the south of the country, according to a witness.

Wazni had narrowly escaped death in December 2019, when men on motorbikes used silenced weapons to kill fellow activist Fahem al-Tai as he was dropping him home in Karbala.

Both were key figures in a national protest movement that erupted against Iraqi government corruption and incompetence in October 2019.

Around 600 activists from the movement have been killed, whether on the streets during rallies or targeted on their doorsteps.

Protests broke out in Karbala, Nassiriya and Diwaniya in southern Iraq in reaction to Wazni’s killing, as people called for an end to the bloodshed and to rampant corruption.

The Iraqi Communist Party and the Al-Beit Al-Watani (National Bloc) party born out of the anti-government protests also said they would boycott Iraq’s October parliamentary elections in protest.

In a video recording in the morgue where Wazni’s body was initially held, a fellow activist blamed pro-Tehran groups for the killing.

“It is the Iranian militias who killed Ihab,” said the activist, who was not named.

‘They kidnap and kill’

“Iran out!” and “The people want the fall the regime!” chanted hundreds of mourners Sunday as they carried Wazni’s body to the Shiah shrines in Karbala, under a sea of Iraqi flags.

Police said they would “spare no effort” to find “the terrorists” behind Wazni’s killing.

Politicians, including Shiah leader Ammar al-Haki, deplored the death and called for justice.

Around 30 activists have died in targeted killings and dozens of others have been abducted since October 2019.

Such killings are normally carried out in the dead of night by men on motorbikes, and nobody claims responsibility.

Authorities have consistently failed to publicly identify or charge the perpetrators of these killings.

Prime Minister Mustafa al-Kadhemi took office a year ago, vowing to rein in rogue factions, fight corruption and roll out long-awaited reforms after years of war and insurgency.

He pledged again Sunday to catch “all the killers”, but the latest victim’s family said it would not accept the traditional visits of condolences until the assailants were unmasked.

Pro-Iran groups view Kadhemi as being too close to Washington while protesters believe he has failed to deliver on his promises.

Wazni had himself had challenged the premier in a Facebook post in February, asking: “Do you know what is going on? You know that they kidnap and kill — or you live in another country?”

Ali Bayati, a member of Iraq’s Human Rights Commission, tweeted Sunday that crimes against activists in Iraq “raise again the question about the real steps of the government regarding accountability”. — AFP

These were the details of the news Iraqi reporter seriously wounded day after activist’s killing sparks protests for this day. We hope that we have succeeded by giving you the full details and information. To follow all our news, you can subscribe to the alerts system or to one of our different systems to provide you with all that is new.