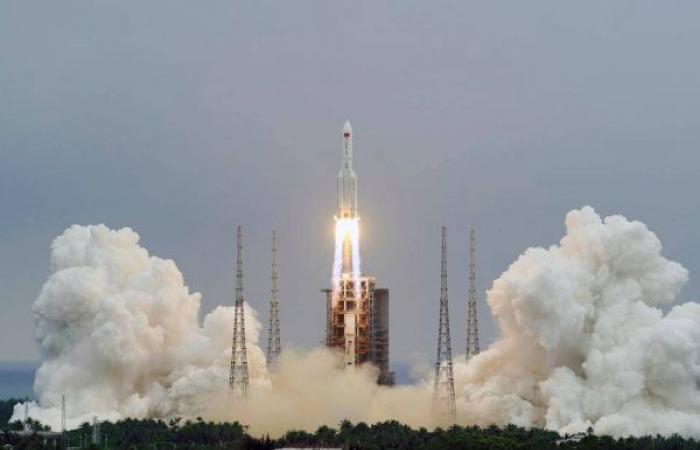 Hind Al Soulia - Riyadh - BEIJING — Remnants of China's biggest rocket landed in the Indian Ocean on Sunday, with the bulk of its components destroyed upon re-entry into the Earth's atmosphere, according to Chinese state media, ending days of speculation over where the debris would hit.

The coordinates given by state media, citing the China Manned Space Engineering Office, put the point of impact in the ocean, west of the Maldives archipelago.

Debris from the Long March 5B has had some people looking warily skyward since shortly after it blasted off from China's Hainan island on April 29, but the China Manned Space Engineering Office said most of the debris was burnt up in the atmosphere.

State media reported parts of the rocket re-entered the atmosphere at 10:24 a.m. Beijing time (0224 GMT) and landed at a location with the coordinates of longitude 72.47 degrees east and latitude 2.65 degrees north.

The US Space Command confirmed the re-entry of the rocket over the Arabian Peninsula, but said it was unknown if the debris impacted land or water.

"The exact location of the impact and the span of debris, both of which are unknown at this time, will not be released by US Space Command," it said in a statement on its website.

The Long March was the second deployment of the 5B variant since its maiden flight in May 2020. Last year, pieces from the first Long March 5B fell on Ivory Coast, damaging several buildings. No injuries were reported.

With most of the Earth's surface covered by water, the odds of populated area on land being hit had been low, and the likelihood of injuries even lower, according to experts. — WAM

These were the details of the news China says rocket debris landed in Indian Ocean west of Maldives for this day. We hope that we have succeeded by giving you the full details and information. To follow all our news, you can subscribe to the alerts system or to one of our different systems to provide you with all that is new.