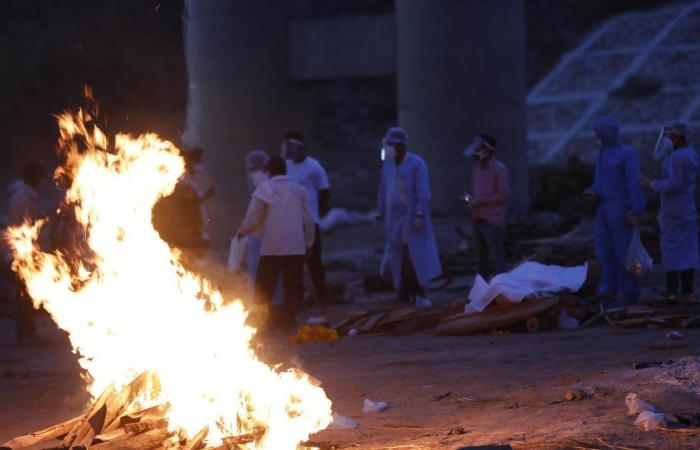 Thank you for reading the news about India’s daily COVID-19 deaths near record, calls for nationwide lockdown mount and now with the details

Jeddah - Yasmine El Tohamy - NEW DELHI: A number of embassies in New Delhi have issued advisories for their staff, giving them the option of leaving India as the coronavirus pandemic sweeps through the country with no signs of slowing.

As the country faces a shortage of beds and oxygen supplies, and several foreign missions suffer local virus outbreaks, staff members have been allowed to leave the country.

The US, Germany and Poland earlier this week said that they approved the voluntary departure of their government employees from India because of the COVID-19 surge.

According to a CNN report on Saturday, the US Embassy has seen more than 200 staff contract the virus. The US State Department is also conducting a medical evacuation from the country.

The embassy’s spokesman told Arab News that the mission is “closely monitoring the situation.

“We will take all necessary measures to safeguard the health and well-being of our employees, including offering vaccines to employees,” he added.

Citing privacy concerns, the spokesman declined to comment on the scale of the embassy outbreak or the evacuation process.

Meanwhile, Germany confirmed that several members of its embassy staff had returned home.

“The German Embassy has opened the possibility for staff and families to return to Germany,” spokesman Hans Christian Winkler told Arab News.

However, he added that there was no “repatriation process” as “only a small number” of embassy workers have left so far.

The Polish foreign ministry also told Arab News in a written statement that it had “presented employees of the Embassy of the Republic of Poland in New Delhi with the option of returning to Poland.”

The statement followed Polish media reports last week saying that a senior diplomat from the country’s New Delhi embassy had been airlifted back to Warsaw for hospitalization after contracting coronavirus.

Switzerland’s embassy admitted that two of its “transferable staff” are in Switzerland, but the country’s ambassador, Dr. Ralf Heckner, said that the two workers had been home “from the beginning of the crisis,” and that no other staff members had left any of the country’s missions in India.

The French Embassy declined comment on whether its staff had received any advice regarding medical evacuations.

These were the details of the news India’s daily COVID-19 deaths near record, calls for nationwide lockdown mount for this day. We hope that we have succeeded by giving you the full details and information. To follow all our news, you can subscribe to the alerts system or to one of our different systems to provide you with all that is new.

PREV Ahead of summit, Putin denies Russia cyberattacks on US
NEXT Alpha, Beta, Gamma, Delta — WHO uses Greek alphabet to name COVID-19 variants