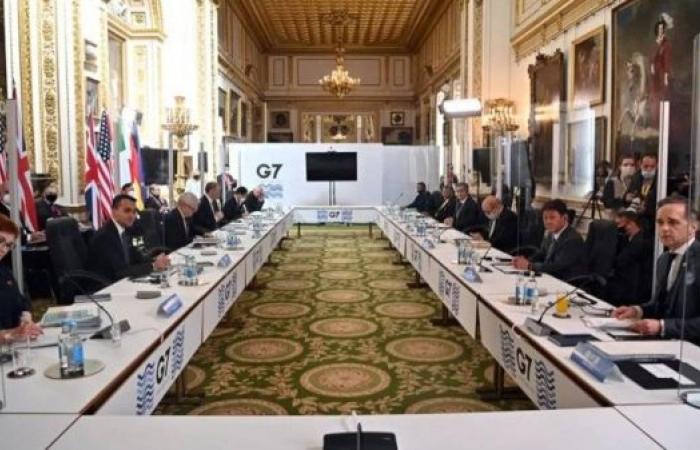 Hind Al Soulia - Riyadh - HONG KONG — China condemned on Thursday a joint statement by Foreign ministers from the Group of Seven (G7) nations that expressed support for Chinese-claimed Taiwan and cast Beijing as a bully, saying it was gross interference in China’s internal affairs.

In a joint statement released on Wednesday, representatives from the G7, which includes Canada, France, Germany, Italy, Japan, the United Kingdom, and the United States, underscored "the importance of peace and stability across the Taiwan Strait," and encouraged the "peaceful resolution of cross-Strait issues."

"We reiterate our strong opposition to any unilateral actions that could escalate tensions and undermine regional stability and the international rules-based order and express serious concerns about reports of militarization, coercion, and intimidation in the region," the statement added.

The ministers also said their governments supported Taiwan's "meaningful participation" in World Health Organization forums and the World Health Assembly, a longstanding goal of Taipei's. Beijing has blocked Taiwan's participation in the WHO, despite the island's effective response to the coronavirus pandemic.

Chinese Foreign Ministry spokesman Wang Wenbin condemned the statement saying it made "groundless accusations" that were a gross interference in China's internal affairs.

"This is the wanton destruction of the norms of international relations," he said in Beijing.

Tensions between Taiwan and China have been growing in recent months, as Beijing has stepped up air and naval drills around the democratic island, which the Communist Party regards as part of its territory and has vowed to "reunify" with mainland China, by force if necessary.

Taiwan was not the only issue on which the G7 had a tough message for China. The ministers' statement also called out "human rights violations and abuses in Xinjiang and in Tibet" and the eroding of "democratic elements of the electoral system in Hong Kong."

The G7 ministers said they "strongly" back "independent and unfettered access" to Xinjiang for the United Nations' High Commissioner for Human Rights. Beijing has previously only invited foreign officials on tightly-controlled tours of Xinjiang, where it has been accused of detaining millions of Uyghurs and other ethnic minorities.

The over-12,000 word communique stopped short of recommending any collective action against China, or Russia, whose "irresponsible and destabilizing behavior" the statement also singled out.

Ministers said their governments would also "look for opportunities to work with China to promote regional and global peace, security and prosperity."

Briefing reporters this week, a senior US State Department official said China was a "dominant topic" at the G7 Forum.

"We opened with it because it was the most important agenda item for us, out of the many important things that we had to discuss," the official said. "There was broad agreement, both the fact that we all want China to be an integral member of the international order, but to do that, it has to play by the rules of that international order."

The official said there was "a great deal of concern about China's behavior in terms of human rights," citing commitments Beijing had made to international agreements such as the Universal Declaration of Human Rights. "This is not an internal affair. This is a matter of living up to international obligations that China signed up for, and there was a unanimity in the G7 on that score as well," the official added.

While not recommending immediate action, the language in the G7 ministers' statement did represent something of an escalation for some participants, namely the European Union, France and Germany, which have typically taken a more conciliatory approach to China. It comes as a major investment deal between the EU and China is on the ropes following tit-for-tat sanctions over Xinjiang.

One of the leading blocs in the European Parliament, the Socialists and Democrats, said in a statement last month: "The Chinese regime does not consider itself as bound by any international treaty or contractual commitments."

"The EU must act consequently and use its market power to impose an economic cost to repeated Chinese violations of fundamental rights and breaches of international law," S&D MEP Raphaël Glucksmann said, calling for the deal to be scrapped. "It is time to defend our principles and protect our strategic interests."

China has yet to react to the G7 statement. Beijing ministries returned to work Thursday after a five-day break for the May Day holiday. In a piece published on Wednesday ahead of the communique, state news agency Xinhua accused US Secretary of State Antony Blinken of using the G7 meeting "to peddle his 'China threat' conspiracy."

"Over the years, Washington has been sparing no effort to slander China on issues such as Xinjiang and Hong Kong, and grossly interfering in China's internal affairs under the guise of human rights and democracy," Xinhua said. — CNN with inputs from agencies

These were the details of the news China condemns G7 statement backing Taiwan for this day. We hope that we have succeeded by giving you the full details and information. To follow all our news, you can subscribe to the alerts system or to one of our different systems to provide you with all that is new.