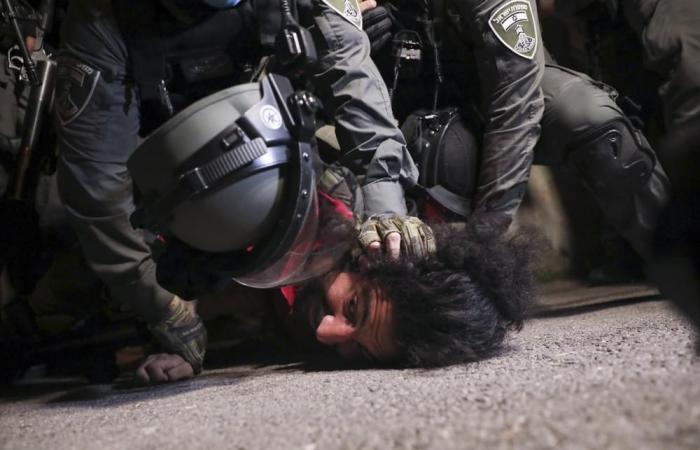 Mohamed Nass - Cairo - GAZA CITY, Gaza Strip (AP) — The shadowy leader of the armed wing of the Islamic militant group Hamas has issued his first public statement in nearly seven years, warning Israel it will pay a “heavy price” if it evicts Palestinians from their homes in east Jerusalem.

Mohammed Deif has been in hiding for more than two decades and is believed to be paralyzed after surviving multiple assassination attempts. The most recent was during the 2014 Gaza war, when an Israeli airstrike killed his wife and infant son, according to Hamas.

That was also the last time he made any public statement, an audio-recording in which he said Hamas chose to attack soldiers rather than civilians, accompanied with footage of Hamas fighters attacking a small Israeli military base near Gaza. Despite his claims, Hamas fired hundreds of rockets at civilian areas during the war.

The only known image of Deif is a 30-year-old ID photo released by Israel, and even in Gaza, only a handful of people would recognize him.

Late Tuesday, Hamas circulated what it described as a pre-recorded audio statement from Deif over the encrypted messaging service Telegram.

In it, Deif says he was sending a “clear, final warning” that if Israel goes through with the threatened eviction of dozens of Palestinians in the Sheikh Jarrah neighborhood in east Jerusalem, then Hamas “will not stand by helplessly and the enemy will pay a heavy price.”

Several Palestinian families in Sheikh Jarrah have been embroiled in a long-running legal battle with Israeli settler groups trying to acquire property in the neighborhood near Jerusalem’s famed Old City. Protesters have scuffled with police there in recent days.

Israel captured east Jerusalem, along with the West Bank and Gaza, in the 1967 war, territories the Palestinians want for their future state. Israel annexed east Jerusalem in a move not recognized internationally and views the entire city as its capital.

The Palestinians view east Jerusalem — which includes some of the holiest sites for Jews, Christians and Muslims — as their capital, and its fate is one of the most sensitive issues in the Mideast conflict.

Recently, Palestinian protesters have clashed with Israeli police over restrictions on gatherings during the Muslim holy month of Ramadan. Hamas egged on the clashes and Gaza militants fired rockets at Israel in support of the protesters.

Hamas appears to be seizing on the threatened Sheikh Jarrah evictions to bolster its image as an armed resistance movement in contrast to President Mahmoud Abbas’ Palestinian Authority, which engages in security coordination with Israel.

Last month, Abbas indefinitely delayed the first Palestinian elections in 15 years, citing Israeli restrictions in east Jerusalem. Critics saw that as a pretext for calling off a vote in which Abbas’ Fatah party appeared likely to lose power and influence to Hamas, which denounced the postponement as a “coup.”

Despite the harsh rhetoric, in Gaza, where Hamas seized power from Abbas’ forces in 2007, the militant group has largely observed an informal cease-fire with Israel in recent years in exchange for the easing of an Israeli-Egyptian blockade on the territory.

IMAGE: Israeli police officers detain a Palestinian demonstrator during a protest against the planned evictions of Palestinian families in the Sheikh Jarrah neighborhood of east Jerusalem, Tuesday, May 4, 2021. (AP Photo/Mahmoud Illean)

These were the details of the news Shadowy Hamas commander warns Israel over Jerusalem for this day. We hope that we have succeeded by giving you the full details and information. To follow all our news, you can subscribe to the alerts system or to one of our different systems to provide you with all that is new.