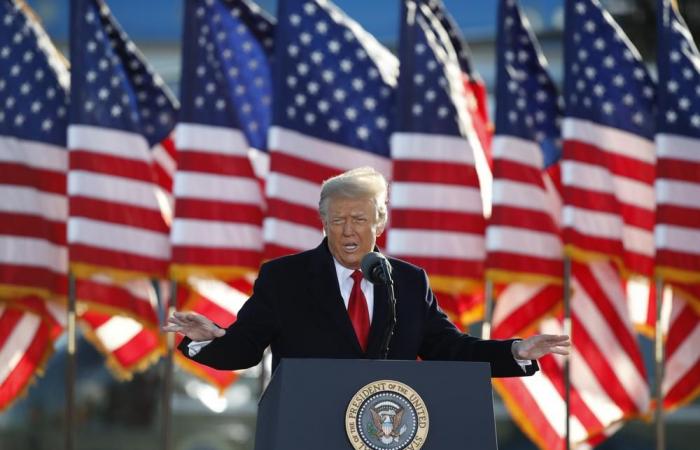 The social network’s quasi-independent Oversight Board voted to uphold his ban from the platform after his account was suspended four months ago for inciting violence that led to the deadly January 6 Capitol riot. But in a statement, it faulted Facebook for the way it made the decision and called its “indefinite” suspension of Trump unreasonable and unworkable.

The board said Facebook sought to avoid its responsibilities by applying “a vague, standardless penalty” and then referring the case to the board to resolve.

“Indefinite penalties of this sort do not pass the international smell test,” oversight board co-chair Michael McConnell said in a conference call with reporters. “We are not cops, reigning over the realm of social media.”

“We love you. You’re very special,” he said to the rioters in the first post. In the second, he called them “great patriots” and told them to “remember this day forever.” Those violated Facebook’s rules against praising or supporting people engaged in violence, the board said.

Helle Thorning-Schmidt, a former Danish prime minister who sits on the board, said in the call that Facebook shirked its responsibility to enforce its own rules. “Facebook should either permanently disable Trump’s account or impose a suspension for a specific period of time,” she said.

Thorning-Schmidt said Facebook can’t just invent “new unwritten rules” for special users when it suits the company while everybody else has to follow their standards. “They did get it right, but they can’t have a penalty that’s indeterminate because that’s not in their own rules,” she said.

Reaction from Trump allies was swift.

“Break them up,” tweeted Rep. Jim Jordan, a close Trump ally and the top Republican on the House Judiciary Committee.

A Trump spokesman did not immediately respond to a request for comment.

The board gave Facebook six months to reexamine the “arbitrary penalty” it imposed on January 7 and decide on another penalty that reflects the “gravity of the violation and the prospect of future harm.”

It didn’t say exactly how Facebook should do that, but offered a number of recommendations. One advised against drawing a firm distinction between political leaders and other influential users because anyone with a big audience can potentially cause serious risks of harm.

Among the board’s recommendations is that considerations of a political leader’s “newsworthiness” shouldn’t take priority when the company must take urgent action to prevent harm. Facebook has said it didn’t consider newsworthiness in its Trump decision, but the board said there remains widespread confusion about Facebook’s handling of influential users.

The board also says Facebook should publicly explain the rules that it uses to sanction influential users, and emphasized the need for time-bound suspensions and clear rules on how they can be lifted. The board says the new penalty must be “clear, necessary and proportionate” and consistent with Facebook’s rules for severe violations.

The board says if Facebook decides to restore Trump’s accounts, the company must be able to promptly address further violations.

The board, which has 20 members and will eventually grow to 40, did not reveal how it voted. It said a minority of members emphasized that Facebook should require users who seek reinstatement after being suspended to “recognize their wrongdoing and commit to observing the rules in the future.”

The board said it considered a wide range of information, including 9,666 public comments from organizations and individuals. That included a statement from a Trump representative on his behalf.

THIS IS A BREAKING NEWS UPDATE. AP’s earlier story follows below.

Since the day after the deadly riot at the Capitol on January 6, former President Donald Trump’s social media accounts have been silent — muzzled for inciting violence using the platforms as online megaphones.

On Wednesday, his fate on Facebook, the biggest social platform around, will be decided. The company’s quasi-independent Oversight Board will announce its ruling around 9 am. ET. If it rules in Trump’s favor, Facebook has seven days to reinstate the account. If the board upholds Facebook’s decision, Trump will remain “indefinitely” suspended.

Politicians, free speech experts and activists around the world are watching the decision closely. It has implications not only for Trump but for tech companies, world leaders and people across the political spectrum — many of whom have wildly conflicting views of the proper role for technology companies when it comes to regulating online speech and protecting people from abuse and misinformation.

After years of handling Trump’s inflammatory rhetoric with a light touch, Facebook and Instagram took the drastic step of silencing his accounts in January. In announcing the unprecedented move, Facebook CEO Mark Zuckerberg said the risk of allowing Trump to continue using the platform was too great.

“The shocking events of the last 24 hours clearly demonstrate that President Donald Trump intends to use his remaining time in office to undermine the peaceful and lawful transition of power to his elected successor, Joe Biden,” Zuckerberg wrote on his Facebook page on January 7.

A day before the announcement, Trump unveiled a new blog on his personal website, “From the Desk of Donald J. Trump.” While the page includes a dramatic video claiming, “A BEACON OF FREEDOM ARISES” and hailing “A PLACE TO SPEAK FREELY AND SAFELY,” the page is little more than a display of Trump’s recent statements — available elsewhere on the website — that can be easily shared on Facebook and Twitter, the platforms that banished him after the riot.

While Trump aides have spent months teasing his plans to launch his own social media platform, his spokesman Jason Miller said the blog was something separate.

“President Trump’s website is a great resource to find his latest statements and highlights from his first term in office, but this is not a new social media platform,” he tweeted. “We’ll have additional information coming on that front in the very near future.”

Barred from social media, Trump has embraced other platforms for getting his message out. He does frequent interviews with friendly news outlets and has emailed a flurry of statements to reporters through his official office and political group.

Trump has even said he prefers the statements to his old tweets, often describing them as more “elegant.”

Facebook created the oversight panel to rule on thorny content on its platforms following widespread criticism of its difficulty responding swiftly and effectively to misinformation, hate speech and nefarious influence campaigns. Its decisions so far — all nine of them — have tended to favor free expression over the restriction of content.

In its first rulings, the panel overturned four out of five decisions by the social network to take down questionable material. It ordered Facebook to restore posts by users that the company said broke standards on adult nudity, hate speech, or dangerous individuals.

Critics of Facebook, however, worry that the Oversight Board is a mere distraction from the company’s deeper problems — ones that can’t be addressed in a handful of high-profile cases by a semi-independent body of experts.

“Facebook set the rules, are judge, jury and executioner and control their own appeals court and their own Supreme Court. The decisions they make have an impact on our democracies, national security and biosecurity and cannot be left to their own in house theatre of the absurd,” said Imran Ahmed, CEO Center for Countering Digital Hate, a nonprofit critical of Facebook. “Whatever the judgement tomorrow, this whole fiasco shows why we need democratic regulation of Big Tech.”

Gautam Hans, a technology law and free speech expert and professor at Vanderbilt University, said he finds the Oversight Board structure to be “frustrating and a bit of a sideshow from the larger policy and social questions that we have about these companies.”

“To some degree, Facebook is trying to create an accountability mechanism that I think undermines efforts to have government regulation and legislation,” Hans said. “If any other company decided, well, we’re just going to outsource our decision-making to some quasi-independent body, that would be thought of as ridiculous.”

By MATT O’BRIEN and BARBARA ORTUTAY

These were the details of the news Facebook board upholds Trump suspension for this day. We hope that we have succeeded by giving you the full details and information. To follow all our news, you can subscribe to the alerts system or to one of our different systems to provide you with all that is new.