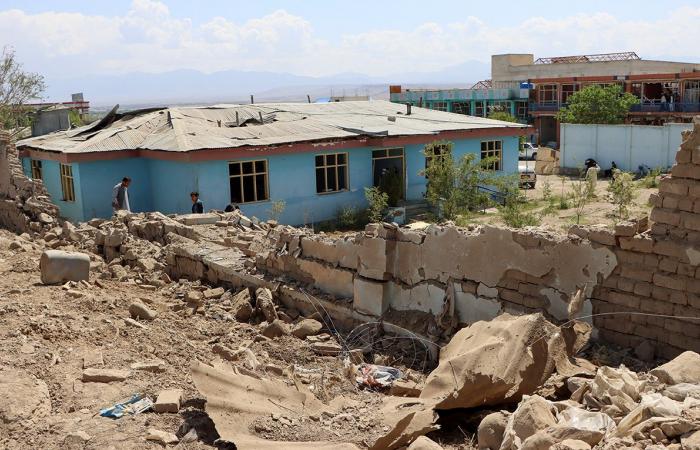 Jeddah - Yasmine El Tohamy - KABUL: They were in the middle of breaking their fast during Ramadan, rejoicing after passing their university entrance exams, when a massive blast ripped through the guesthouse in Pul-e-Aam, the provincial capital of Logar in eastern Afghanistan, killing 25 people and leaving more than 100 injured.

At least 21 of those who died in the bombing on Friday night were school students who had traveled from different villages of an impoverished district of the Azar region to Logar for the exams, and the deadly blast crushed the dreams of several families seeking a better future for their children.

“They could not afford to rent hotel rooms and, instead, stayed in a guesthouse of a former provincial council member,” Homa Ahmadi, an MP from Logar, told Arab News.

“These were innocent and poor students with dreams for their future. Their families had raised them amid lots of hardship, and hoped to see them finish university and earn a living,” the MP added.

A minivan packed with explosives was parked near the guesthouse belonging to Didar Lawang, former head of the provincial council. It detonated a few minutes after several men disembarked, Hassibullah Stanekzai, chief of Logar’s provincial council, told Arab News.

The men reportedly introduced themselves as officials belonging to an aid group, searching for “some food to break the fast.”

“The force of the blast was so enormous that it shattered windows in houses up to 1 kilometer away. In total, 25 lost their lives and 110 were wounded,” Stanekzai said.

The explosion also damaged the only public hospital in the vicinity, forcing local officials to rush many of the injured to Kabul, he added.

There was no immediate claim of responsibility for the attack.

Interior Ministry spokesman Tariq Aryan told Arab News that a probe had been launched into the incident, but it was too early to say who was being targeted in the attack.

However, President Ashraf Ghani accused the Taliban, describing the attack as a “humanitarian crime.”

“The Taliban have not giving up the killing of people in the month of Ramadan, which is a month of forgiving and mercy,” he said in a statement on Saturday.

The Taliban was unavailable for comment despite repeated attempts by Arab News to contact them on Saturday. Smaller groups affiliated with Daesh are also known to operate in the region.

In July, at least 18 people, mostly security forces, were killed in a car bombing on the eve of Eid Al-Adha, one of the two most important festivals of the Islamic calendar.

The attack occurred ahead of an announcement for a three-day ceasefire by the Taliban after the US stepped up its efforts to broker peace talks between the insurgents and Ghani’s government.

The Taliban denied any links to the attack. Friday’s blast comes amid a drawdown of the remaining US-led troops from Afghanistan, initially set for May 1 but postponed to a Sept.11, based on a decision by US President Joe Biden.

The complete withdrawal of all foreign troops from Afghanistan was a key condition set by the Taliban before signing a landmark accord with Washington in Doha, Qatar, more than a year ago.

The Taliban have accused Biden of violating the seal based on which the group had halted attacks on foreign troops, but not on Afghan forces.

The group had warned Washington against delaying the withdrawal process before boycotting all peace talks on Afghanistan until the troops’ exit.

Earlier, Afghan spy chief Ahmad Zia Saraj had said that the Taliban had stepped up their attacks by 24 percent since the Doha deal, highlighting a spike in violence after Biden delayed the withdrawal to Sept.11, the 20th anniversary of the 2001 attacks on US soil by Al-Qaeda suspected members.

These were the details of the news Deadly blast shatters poor Afghan families’ dreams for this day. We hope that we have succeeded by giving you the full details and information. To follow all our news, you can subscribe to the alerts system or to one of our different systems to provide you with all that is new.