Biden toots horn for Amtrak and future of US rail travel 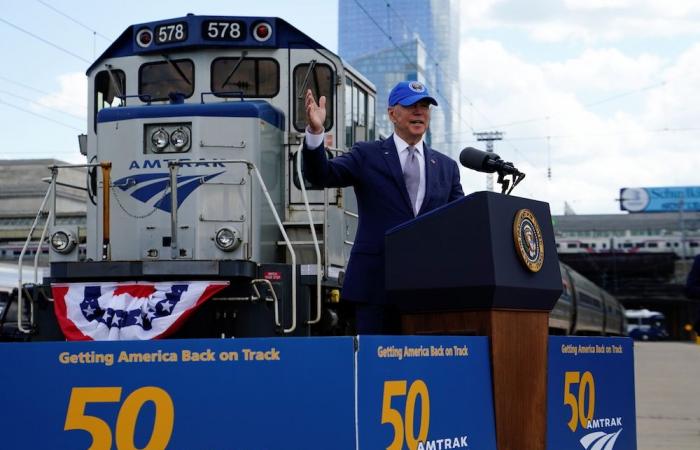 PHILADELPHIA, May 1 — President Joe Biden — he’d probably be just as happy with his nickname Amtrak Joe — celebrated the national rail system’s 50th anniversary today by urging huge funding increases as part of a US$2.3 trillion (RM9.42 trillion) US infrastructure makeover.

Dubbed the passenger rail system’s best customer, Biden became famous for daily commutes between Washington and his Delaware home during the 36 years he was a senator.

He started when his first wife and daughter were killed in a car accident, subsequently deciding to get home every night from the Senate to look after his two sons, who survived the crash.

Speaking on a platform at the 30th Street Station in Philadelphia, Biden reminisced at length about his Amtrak odyssey, calling the conductors and other staff he met over those years “family.”

“Amtrak wasn’t just a way of getting home. It provided me, and I’m not joking, an entire other family,” he said.

Providing Amtrak with an extra US$80 billion as part of the mammoth American Jobs Plan infrastructure package would allow upgrades and expansion of routes, Biden said.

“We have to build back better and today we have a once in a generation opportunity... (for) Amtrak and rail and inner-city rail,” he said.

“Make investments to get America... back on track.”

Biden argued that rail networks are also part of the answer to his emphasis on doubling the US commitment to greenhouse gas reductions under the Paris climate accord. Rejoining the global pact was one of his first moves on taking office, reversing his predecessor Donald Trump’s decision to pull the United States out.

Biden’s love for trains was recognized by both the CEO of the network, William Flynn, who called him “one of Amtrak’s most loyal customers,” and a conductor who took the future president’s ticket years ago.

“One of my first lessons my father taught me as a conductor was to look out for one of Amtrak’s most frequent riders, Senator Joe Biden,” conductor Blake Weaver said. “I always remembered how he treated everyone.” — AFP

These were the details of the news Biden toots horn for Amtrak and future of US rail travel for this day. We hope that we have succeeded by giving you the full details and information. To follow all our news, you can subscribe to the alerts system or to one of our different systems to provide you with all that is new.

PREV ‘Demystify’ albinism and end discrimination – UN chief
NEXT How India’s most crowded city beat the odds, and the virus