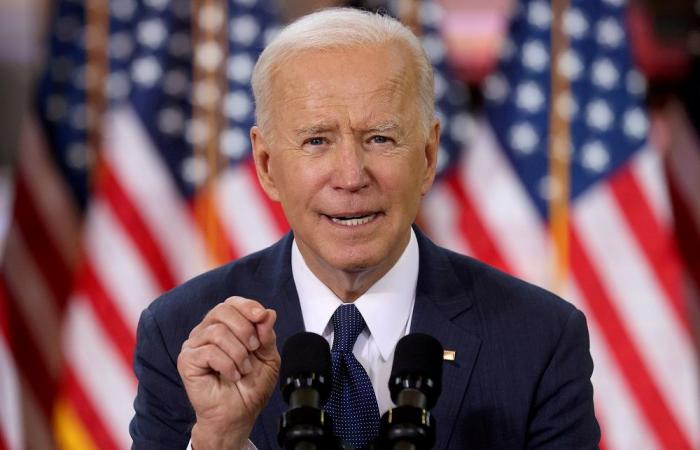 Addressing a joint session of Congress on the eve of his 100th day in office, Biden will hail what he calls “stunning” success in vaccinating Americans — a national effort that has transformed the country from coronavirus catastrophe to leader in global recovery.

“Now, after just 100 days, I can report to the nation: America is on the move again,” he was to say, according to excerpts released by the White House.

With solid approval ratings and a Democratic congressional majority — albeit razor thin — Biden is riding that momentum to promote an economic programme he says will raise millions of blue collar Americans into the middle class.

“You feel left behind and forgotten in an economy that’s rapidly changing. Let me speak directly to you,” Biden was to say, before going on to promise Americans “good-paying jobs that can’t be outsourced.”

Biden’s bid to woo the “forgotten” voter — a direct borrowing from Donald Trump’s populist lexicon — will be backed up by his announcement of a programme to pour billions of dollars into education and childcare.

The spending spree, dubbed the American Families Plan, will be cast as a historic move to redress economic inequality.

To pay for it, Biden wants to reverse tax cuts for the rich that his Republican predecessor Trump pushed through in 2017.

“I think what you’ll hear the president say tonight is that we really have a once-in-a-generation opportunity right now to seize the moment, to make these investments,” White House Communications Director Kate Bedingfield said on CNN.

In every aspect of the primetime television speech, Biden will echo his mantra that “America is back” — both in recovering from the coronavirus disaster and in putting the turbulence of the Trump era behind.

When it comes to foreign policy, he “will talk about his commitment to reengaging with the world,” White House Press Secretary Jen Psaki said.

On domestic issues, Biden will make the case for a lengthy Democratic wish list, including police reform, pro-immigrant reforms and gun control — some of the most sensitive issues in US politics.

US presidents usually bend over backwards to avoid or at least hide tax increases.

However, Biden is banking on popular support for his idea of leaning on the super rich to fund the US$1.8 trillion (RM7.38 trillion) American Families Plan — both by raising their taxes and closing loopholes they use to escape paying in the first place.

The spending plan, which will need approval by a deeply divided Congress, would pour money into early education, childcare and higher education.

To fund this, the top income tax rate would increase from 37 per cent, where Trump’s plan put it, back to its pre-Trump 39.6 per cent.

The Biden plan would also end loopholes and capital income tax breaks, while raising “billions,” according to the White House, in a tightened tax regime for inherited wealth.

Americans earning less than US$400,000 a year, however, would face no extra taxes.

“There is broad support among the American people for this approach,” a senior White House official, who asked not to be identified, told reporters.

“These reforms are fundamentally about fairness.”

The proposed new splurge comes after Congress already approved a US$1.9 trillion American Rescue Plan, which injected stimulus into almost every corner of the economy, and is now debating a proposed US$2 trillion-plus infrastructure plan.

Trump, in an interview on the right-wing Dan Bongino radio show, predicted that the tax increases would mean that “companies are going to flee the country.”

The setting for Biden’s maiden address to Congress as president will reflect the crisis times in which he took office.

Security has been at top level around the Capitol building since the January 6 riot when Trump supporters rampaged against what the Republican falsely claims was a stolen election.

Although Covid-19 is on the back foot — vaccinated Americans were told Tuesday they can now do most things outside without wearing a mask — the pandemic will also loom heavily.

Instead of a House chamber crammed with the usual 1,600 or so politicians and guests, Biden will look out on a select group of around 200.

Of the nine members of the Supreme Court, only Chief Justice John Roberts will attend.

Only the secretaries of defence and state will be in the room, meaning that the tradition of nominating a “designated survivor” — someone who could take over the country if the entire government died while inside the Capitol — is not necessary.

“The cabinet will be watching from their offices or homes,” Psaki said.

Biden’s appeal for more government spending will likely get no applause from half the chamber and his expected plan to announce tax increases for America’s most wealthy will stir Republican fury.

Senior Republican Senator Mitch McConnell urged the White House to “shake off its daydreams of a sweeping socialist legacy,” accusing the Biden team of acting in synch with “the radical left.”

Another Republican senator, Joni Ernst, accused the Democrats of rushing through “trillions of dollars of new spending for their pricey pet projects.” — AFP

These were the details of the news Biden promises bright future for America’s ‘forgotten’ workers for this day. We hope that we have succeeded by giving you the full details and information. To follow all our news, you can subscribe to the alerts system or to one of our different systems to provide you with all that is new.