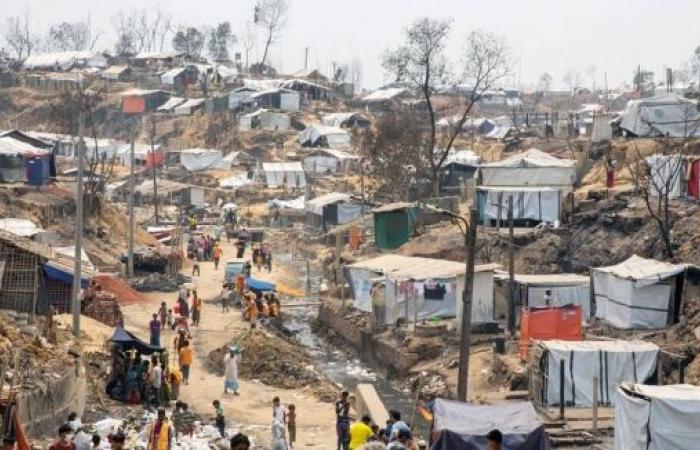 We show you our most important and recent visitors news details Rohingya refugees traumatized again, after devastating camp fire in the following article

Hind Al Soulia - Riyadh - GENEVA — A Rohingya refugee and volunteer for the International Organization for Migration (IOM), has been telling UN News how his community has been “once again traumatized” as a result of a massive fire which swept through the Cox’s Bazar refugee camp in Bangladesh in March, killing at least 11 people and making more than 45,000 homeless.

Mohammad Alam is one of 800,000 Rohingya refugees who have fled unrest in neighboring Myanmar over the past several years and who are now sheltering in Cox’s Bazar. He told UN News about losing all his possessions in the fire and how he and others are trying to rebuild for the future.

“I never thought I was going to face such horrific incidents as the 2017 violence in Myanmar ever again. On March 22, I saw the smoke rise in a neighboring camp, but didn’t think much of it as it’s a common occurrence during the dry season. I just assumed it would be doused quickly by the firefighters like previous times. I could have never foreseen its magnitude.

When I saw the flames reaching my block, I rushed to my shelter and managed to evacuate my mother and three younger siblings. As I went back to try to save some of my belongings, I felt the blaze over my head and for a brief moment lost consciousness.

My father shook me and took me out of the shelter. We managed to save just the clothes on our backs. Everything else burned. In the meantime, my mother and siblings were nowhere to be found. I searched for them frantically for a few hours. Fortunately, we found them at my friend’s house. After three weeks of living scattered, we finally moved in together again.

It seemed that the Rohingya community, which was trying to forget the traumas of the past, has once again being traumatized. The refugees are stressed and worried about other potential fires. People are grieving, for their loved ones, for their possessions, for their lives back home.

After the fire, all the staff rushed here to support and to coordinate the humanitarian assistance on the ground. They made sure the facilities were rehabilitated quickly, including the health centers, latrines and distributions points.

I have seen the IOM teams here working day and night to ensure that we are taken care of. As a refugee, I am grateful for this service. As an IOM volunteer, I am honored to be a part of the response and to serve my community.

After the fire happened, I started working in Camp 9. We go through all the neighborhoods and use our megaphones to disseminate messages for the community. The messages cover different topics, such as food, nutrition, refugee registrations, as well as medicine for those who need it.

We are collaborating with different people to deliver these messages so that we can reach every single shelter.

If anyone has a problem, we check how we can support them and solve the problem. If they are not getting the support they need, they can reach out to the complaints desk. We also show them where the services are being provided.

We explain to people how they can protect themselves in case of fire. We work closely with Disaster Management Unit volunteers, also known as firefighters in the community.

We broadcast the messages on the loudspeakers outside the mosque. We advise people to take care of their children and elders. We also recommend them to not go to the fire-affected areas because they could get injured.

I get a lot of satisfaction from these tasks. People have been faced with a lot of issues and challenges. They struggle with their lives. If I can help them in such situations, I think I am blessed. I feel good about myself. I think we should be helping people at the worst of times. This is what makes me happy.

My childhood was similar to other children’s around the world. I used to go to school in my village, play with my friends and lead a happy life with my family and seven siblings.

My parents were farmers, working in agriculture and fish cultivation. I succeeded in finishing high school while also helping out my father with the daily chores. Back home in our village, we managed to live off the land, but our fate was not in our hands.

Seeing the oppression back home, we decided to cross the border on Aug. 27, 2017. We stayed on the Bangladesh-Myanmar border for a few days. After that, we moved from place to place, staying with friends and relatives for the next month or so until we finally arrived in the refugee camps.

It was a struggle in the beginning to find what we needed, from food to medicine. As more funding started to come in, we received more support. We managed to rebuild our shelters, access educational programs and have livelihood opportunities to generate an income for ourselves.

As time went by, camp life became more disciplined and people traumatized by the violence back home started to enjoy life again.

In the beginning, I used to work as a translator for journalists covering the Rohingya crisis. In 2018, I was lucky to find a job as a volunteer with IOM. My elder siblings got married here and now have their own families.

Over the years, we managed to recreate our native village in Rakhine right here in the camp. It sometimes feels like a lifetime has passed since we arrived here.

Between the incidents back home, the fire here and COVID-19, it’s hard to be optimistic. Most people have stopped hoping for now as there are no benefits to it. We don’t know what will happen tomorrow let alone a month from now.

We can only hope that future generations can have a better future than us. But I personally hope that better days will come after the worst of days.” — UN News

These were the details of the news Rohingya refugees traumatized again, after devastating camp fire for this day. We hope that we have succeeded by giving you the full details and information. To follow all our news, you can subscribe to the alerts system or to one of our different systems to provide you with all that is new.