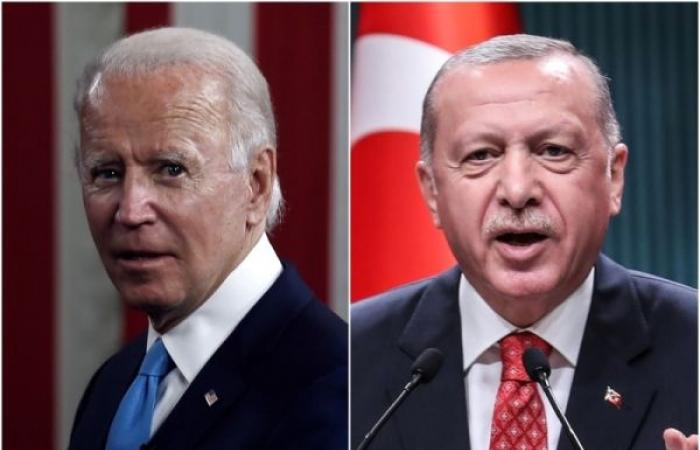 Hind Al Soulia - Riyadh - WASHINGTON — US President Joe Biden told his Turkish counterpart Recep Tayyip Erdogan on Friday he plans to recognize the 1915 massacre of Armenians by the Ottoman Empire as genocide, according to a person familiar with the conversation.

Readouts from the White House and the Turkish presidency did not mention the issue. The call was described by the person familiar as "tense." Bloomberg was first to report that Biden told Erdoğan of his intentions.

Biden has been preparing to recognize the century-old atrocities against Armenians as a genocide, fulfilling a campaign promise. Biden's predecessors in the White House had stopped short of using the word, wary of damaging ties with a key regional ally.

Biden has established a pattern of calling world leaders to warn them of forthcoming moves by his administration which will irritate the relationship. Last week, days ahead of rolling out sanctions on Russia, Biden also called Russian President Vladimir Putin to preview the sanctions which were put in place to punish Moscow for its interference in the 2020 US election, its SolarWinds cyber-attack and its ongoing occupation and "severe human rights abuses" in Crimea.

Later on Friday, Turkey's ambassador to the US, Hasan Murat Mercan, has a meeting at the White House with a National Security Council official, according to sources familiar with the conversation between the two presidents. The ambassador received his accreditation from the White House earlier this week — paving the way for him to assume his ambassadorial responsibilities — and this will be the ambassador's first meeting with Biden administration officials.

As vice president, Biden dealt frequently with Erdoğan and made four trips to Turkey, including in the aftermath of a failed coup attempt. But since then he's offered a less-than-rosy view of the Turkish leader.

"I've spent a lot of time with him. He is an autocrat," he told the New York Times editorial board in 2020. "He's the president of Turkey and a lot more. What I think we should be doing is taking a very different approach to him now, making it clear that we support opposition leadership."

Biden spoke by telephone with Erdoğan on Friday, his first conversation with the Turkish leader since taking office. The long period without communication had been interpreted as a sign Biden is placing less importance on the US relationship with Turkey going forward.

In a readout of the call, the White House said Biden "convey(ed) his interest in a constructive bilateral relationship with expanded areas of cooperation and effective management of disagreements."

Earlier this week, US officials had been sending signals to allies outside the administration — who have been pushing for an official declaration — that the President would recognize the genocide. Addressing the potential move in an interview with a Turkish broadcaster this week, Turkey's foreign minister said, "If the United States wants to worsen ties, the decision is theirs."

The government of Turkey often registers complaints when foreign governments describe the event, which began in 1915, using the word "genocide." They maintain that it was wartime and there were losses on both sides, and they put the number of dead Armenians at 300,000.

The declaration will not bring with it any new legal consequences for Turkey, only diplomatic fall-out.

The campaign of atrocities Biden appears poised to acknowledge began the nights of April 23 and 24, 1915, when authorities in Constantinople, the Ottoman capital, rounded up about 250 Armenian intellectuals and community leaders. Many of them ended up deported or assassinated. April 24, known as Red Sunday, is commemorated as Genocide Remembrance Day by Armenians around the world.

Whether due to killings or forced deportation, the number of Armenians living in Turkey fell from 2 million in 1914 to under 400,000 by 1922.

While the death toll is in dispute, photographs from the era document some mass killings. Some show Ottoman soldiers posing with severed heads, others with them standing amid skulls in the dirt. The victims are reported to have died in mass burnings and by drowning, torture, gas, poison, disease and starvation. Children were reported to have been loaded into boats, taken out to sea and thrown overboard. Rape, too, was frequently reported.

In 2019, the House and Senate passed a resolution recognizing the mass killings of Armenians from 1915 to 1923 as genocide. Prior to its passage, the Trump administration had asked Republican senators to block the unanimous consent request several times on the grounds that it could undercut negotiations with Turkey. — Courtesy CNN

These were the details of the news Biden tells Erdogan he plans to recognize Armenian genocide for this day. We hope that we have succeeded by giving you the full details and information. To follow all our news, you can subscribe to the alerts system or to one of our different systems to provide you with all that is new.