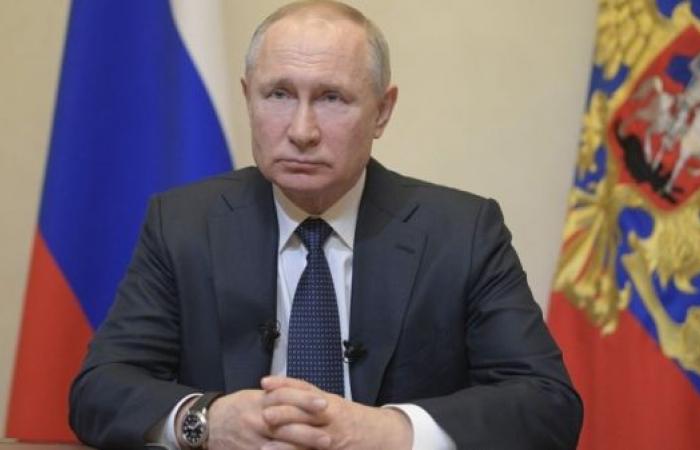 Hind Al Soulia - Riyadh - MOSCOW — Russian President Vladimir Putin called on his foreign rivals not to "cross a red line" with Russia during his annual address to the nation on Wednesday, hours before pro-Navalny protests were to be held across the country.

Putin said some countries "blame Russia" as a "kind of sport", although he did not reference the big issues pitting him against the US and EU, according to AFP.

Western countries have warned Moscow that it is held responsible for jailed critic Alexei Navalny's health and threatened further sanctions should his health deteriorate.

Moscow's relations with the West are also strained by its military buildup along the border with Ukraine.

Putin's speech comes just hours before protests in support of Navalny are scheduled to take place in 77 cities across the country. At least two of his close allies were arrested on Wednesday morning.

The protests were called earlier this week after Navalny's medical team warned that he could be days away from dying.

The opposition figure is on his third week of a hunger strike to protest the authorities' refusal to let him see his personal doctors after complaining of severe back pain which his physicians believe may be symptoms of his August 2020 Novichok attack.

The Russian penitentiary service announced on Monday that we would be transferred to a hospital in another penal colony but his doctors were once more denied from seeing him after waiting for hours on Tuesday.

Putin opened his speech by thanking healthcare workers for their work during the COVID-19 pandemic and praising the country's "real breakthrough" regarding vaccines.

"Russia now has three reliable vaccines against the coronavirus," he said, including Sputnik V.

He urged his compatriots to get vaccinated. The rollout of the vaccines in Russia has been slower than in the West. According to the Gamaleya Research Institute of Epidemiology and Microbiology, around 3.8 million of Russia's 146 million population has so far been fully immunized.

The Russian government puts the COVID-19 death toll at over 106,000 but the Rosstat statistical agency estimated that at least 224,000 people had lost their lives to the virus by the end of February, which would make Russia one of the worst impacted countries in the world.

Despite its slow pace of vaccination, Moscow has criticized the West for not using its Sputnik V vaccine, accusing it of "bias". The maker of the vaccine submitted it for use to the European regulator last month.

In his address, Putin also promised new measures to encourage births and to increase average life expectancy, acknowledging that the pandemic has exacerbated demographic trends in Russia.

Putin proposed new incentives to help the economy overcome the blow from the pandemic and new social payments to the population. — Euronews

These were the details of the news Russian President Putin warns foreign rivals not to 'cross a red line'  for this day. We hope that we have succeeded by giving you the full details and information. To follow all our news, you can subscribe to the alerts system or to one of our different systems to provide you with all that is new.