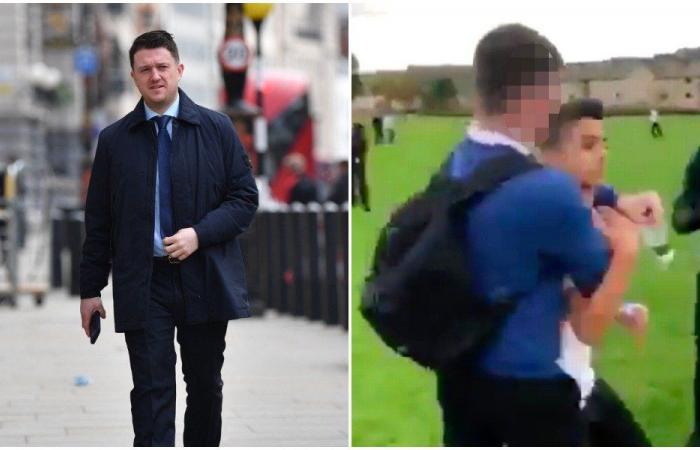 Thank you for reading the news about Syrian refugee boy received death threats after far-right leader’s accusations: UK court hearing and now with the details

Jeddah - Yasmine El Tohamy - LONDON: A Syrian refugee schoolboy in the UK faced death threats and was forced to flee his home with his family due to social media posts from a far-right extremist, a British court heard on Wednesday.

Yaxley-Lennon posted two videos to Facebook, which attracted more than 900,000 views, saying Hijazi had “participated in a violent assault on a young girl” at his school and had also “threatened to stab” a fellow student.

His comments came after Hijazi was filmed being attacked at a school playground near where he lived in Huddersfield, northern England, in November 2018. In the footage, his fellow pupils assaulted him and “simulated waterboarding him,” a preliminary hearing at the High Court in London was told.

The video was watched millions of times after it was posted on social media and prompted outrage and public sympathy for the refugee schoolboy, who fled Homs in Syria with his family in 2016.

In his own videos, Yaxley-Lennon claimed Hijazi was “not innocent and violently attacks young English girls in his school,” while also claiming that he “beat a girl black and blue.”

His comments had turned Hijazi “into the aggressor” and the boy filmed bullying him into a “righteous white knight,” Hijazi’s lawyer Catrin Evans said on the first day of the libel case.

She said that Yaxley-Lennon’s allegations had a “devastating effect on Jamal and his family” and were instrumental in them having to relocate from the area in 2019.

Yaxley-Lennon “used his social media platforms, in particular his Facebook account, to spread his extremist views,” and did so “without any direct knowledge of the events in question,” Evans added.

Representing himself, Yaxley-Lennon defended his comments, claiming they were “substantially true.”

In written submissions, he said he had “uncovered dozens of accounts of aggressive, abusive, and deceitful behavior by the claimant, including acts which speak the truth to the matters complained of.”

The eight-day trial at the Royal Courts of Justice will hear evidence from both Hijazi and Yaxley-Lennon, as well as pupils and teachers at Hijazi’s former school, and is expected to conclude on April 30.

These were the details of the news Syrian refugee boy received death threats after far-right leader’s accusations: UK court hearing for this day. We hope that we have succeeded by giving you the full details and information. To follow all our news, you can subscribe to the alerts system or to one of our different systems to provide you with all that is new.