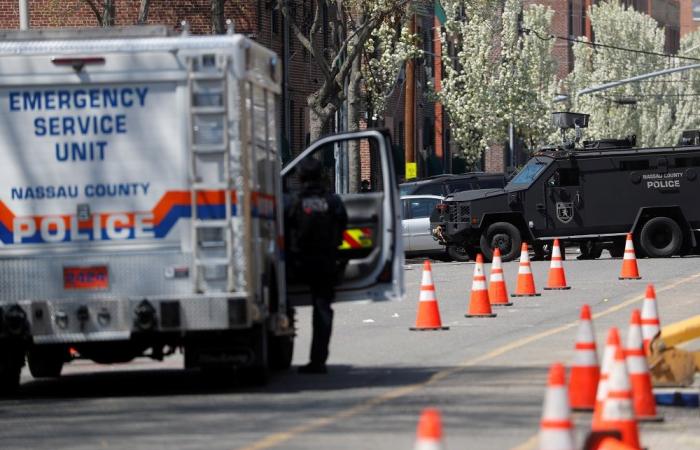 HEMPSTEAD, April 21 — Police arrested a suspected gunman yesterday about four hours after a shooting that left one man dead and two other people wounded at a crowded supermarket in a New York City suburb.

“The subject has been apprehended and taken into custody,” Nassau County Police said in a statement. “Our thoughts are with those who were killed and injured today.”

The attack occurred shortly after 11 am in the second-floor manager’s office at a Stop & Shop supermarket in West Hempstead on Long Island east of New York City, according to Nassau County Police Commissioner Patrick Ryder.

Wilson, who has addresses in both Long Beach and Hempstead, New York, is either a current or former employee of the Stop & Shop, Ryder said.

“He did have a small handgun,” Ryder said. “We don’t know the reason for the shooting.”

Before the arrest, Nassau County police and other authorities surrounded the apartment complex in Hempstead, about 25 miles (40 km) east of Manhattan, according to a Reuters photographer near the scene.

The suspect was arrested shortly after 3 pm, police said. No further information was immediately available.

The attack comes at a time when the United States is reeling from a series of mass shootings. Among them, gunmen killed eight people at a Federal Express warehouse in Indianapolis, 10 people, including a police officer, at a supermarket in Boulder, Colorado; and eight people in three Atlanta-area spas.

In yesterday’s shooting, witnesses interviewed on local media reported hearing at least six shots. Some said the suspect may have jumped onto a bus to escape, but police could not confirm that account.

“It’s an ongoing investigation,” Ryder said, adding that the two wounded were alert and conscious and being treated at a hospital.

The fatality was only described as a 49-year-old man. It was unclear whether the dead or wounded were also employees of the store. — Reuters

These were the details of the news Suspect arrested after fatal shooting at suburban New York supermarket for this day. We hope that we have succeeded by giving you the full details and information. To follow all our news, you can subscribe to the alerts system or to one of our different systems to provide you with all that is new.