Nine dead in shooting at FedEx facility in US; shooter named 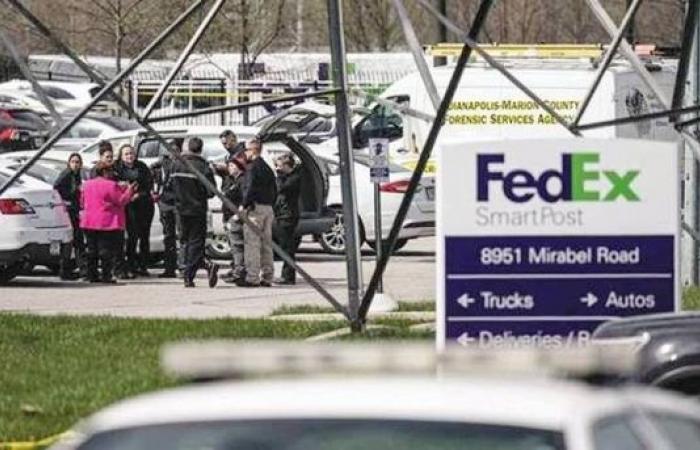 We show you our most important and recent visitors news details Nine dead in shooting at FedEx facility in US; shooter named in the following article

Hind Al Soulia - Riyadh - WASHINGTON — Police have named 19 years old Brandon Scott Hole of Indiana as the alleged shooter who opened fire at a FedEx facility in Indianapolis that left at least eight people dead and several injured in the state.

Special agent in charge of the Indianapolis field office, Paul Keenan, said the suspect's home was being searched by the FBI. Police scoured a Fedex facility in Indianapolis and searched the suspected gunman's home Friday looking for a motive for the latest mass shooting to rock the United States.

Earlier, Indianapolis police said that they had not yet discovered the gunman's motive for opening fire with a rifle late Thursday night at a FedEx processing center near the Indianapolis airport.

US President Joe Biden said in a briefing "today's briefing is just the latest in a string of tragedies."

"Gun violence is "an epidemic in America. But we should not accept it. We must act," Biden noted.

Up to eight people were killed and at least four others were wounded in a mass shooting at a FedEx facility in Indianapolis late Thursday.

According to police, the gunman then killed himself and that the shooting "wasn't precipitated by any kind of a disturbance or an argument." Deputy Chief of the Indianapolis Metropolitan Police Department Craig McCartt said.

The incident came a week after President Biden branded US gun violence an 'epidemic and an 'international embarrassment as he waded into the tense debate over gun control, a sensitive political issue in the United States.

After this latest killing he again ordered flags flown at half-mast at the White House and other public buildings.

McCartt told reporters, “He got out of his car and pretty quickly started some random shooting outside the facility. There was no confrontation with anyone that was there. There was no disturbance. here was no argument.

“He just appeared to randomly start shooting and that began in the parking lot and then he did go into the building... for a brief period of time before he took his own life.”

'This is a devastating day and words are hard to describe the emotion we feel, said FedEx chairman Frederick Smith in a letter to employees, adding that the company was working with law enforcement.

One man who was working a twilight shift at the plant told local broadcaster WISH-TV that he saw the gunman start shooting and heard more than 10 shots.

“I saw a man with a sub-machine gun of some sort, an automatic rifle, and he was firing in the open. I immediately ducked down and got scared,” Jeremiah Miller said.

“My friend's mother, she came in and told us to get inside the car. What we've been doing (since) is telling everyone, our co-workers not to go to work today,” he added.

Vice-President Kamala Harris also spoke about the FedEx shooting yesterday, saying that there is 'no question this violence must end. — Agencies

These were the details of the news Nine dead in shooting at FedEx facility in US; shooter named for this day. We hope that we have succeeded by giving you the full details and information. To follow all our news, you can subscribe to the alerts system or to one of our different systems to provide you with all that is new.