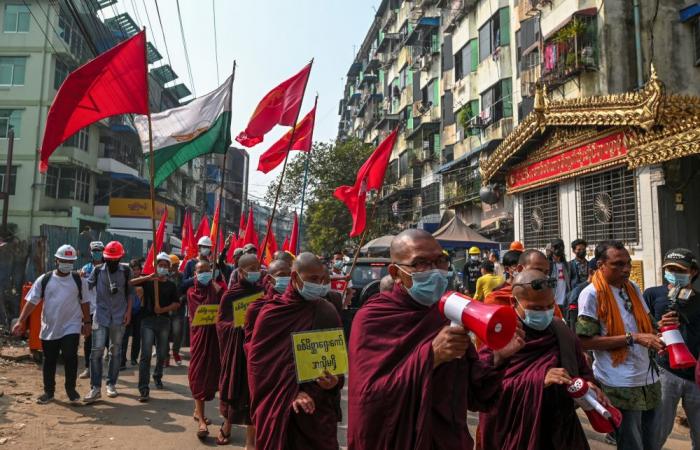 YANGON, April 16 ― Opponents of military rule in Myanmar observed a “silent strike” today, with many people staying home to mourn the more than 700 people killed in protests against a February 1 coup and others wearing black held small marches in several cities and towns.

Many Myanmar citizens, infuriated by the return of military rule after five years of civilian government led by democracy champion Aung San Suu Kyi, have been taking to the streets day after day with activists thinking up new ways to show opposition as the security forces step up their suppression.

“We have to stage a Silent Strike to show our sorrow for the martyrs who have scarified their lives. The most silent voice is the loudest.”

Friday is the fourth day of the five-day traditional Buddhist New Year holiday, known as Thingyan. Most people this year are shunning the usual festivities to focus on their campaign against the generals who overthrew Suu Kyi's government and locked up her and many others.

Streets in the main city of Yangon were largely deserted, residents said, while black-clad protesters held small rallies in half a dozen cities and towns, media reported.

There were no immediate reports of violence but overnight, two people were shot and killed in the central town of Myingyan, Radio Free Asia reported.

The military has also been rounding up its critics and has published the names of more than 200 people wanted under a law that makes it illegal to encourage mutiny or dereliction of duty in the armed forces.

Two prominent protest organisers were arrested yesterday along with an actor and singer, both known for speaking out against the coup.

Opponents have been organising both at home and abroad with the aim of stepping up their campaign.

A previously unknown group called the Ayeyarwaddy Federal Army said on Facebook it aimed to fight the military to restore an elected government and protect the people and it called for volunteers.

It gave no details about how it aimed to take on the well-equipped and seasoned army, which has been battling ethnic minority insurgents for decades.

International pressure has also been slowly building on the military, particularly from Western governments, though the military has a long record of brushing off outside pressure.

The European Union has agreed to impose sanctions on another 10 individuals linked to the coup and to target two businesses run by the armed forces for the first time in protest at the military takeover, two diplomats said.

While the EU has an arms embargo on Myanmar and targeted 11 senior military officials last month, the decision to target the two companies is the most significant response for the bloc since the coup.

EU diplomats told Reuters in March that parts of the military's conglomerates, Myanma Economic Holdings Limited (MEHL) and Myanmar Economic Corporation (MEC), would be targeted, barring EU investors and banks from doing business with them.

Human rights groups have also called for them to be sanctioned.

The EU declined to comment and no one at Myanmar's mission to the EU in Brussels could be reached for reaction.

The firm did not give details of how it would end the venture but a spokesman told Reuters while it was ending the venture relationship, it was not pulling out of Myanmar.

Leaders of Southeast Asian neighbours, which have been trying to encourage talks between the rival Myanmar sides, will meet in Indonesia on April 24 to discuss the situation, Thai and Indonesian media reported.

Junta leader Senior General Min Aung Hlaing was due to attend, a Thai broadcaster said, but the Jakarta Post said it had not been confirmed whether the summit would include representatives of the junta or the former government. ― Reuters

These were the details of the news Opponents of Myanmar military rule hold 'silent strike' for this day. We hope that we have succeeded by giving you the full details and information. To follow all our news, you can subscribe to the alerts system or to one of our different systems to provide you with all that is new.