Blinken in unannounced visit to Afghanistan to sell US troop withdrawal 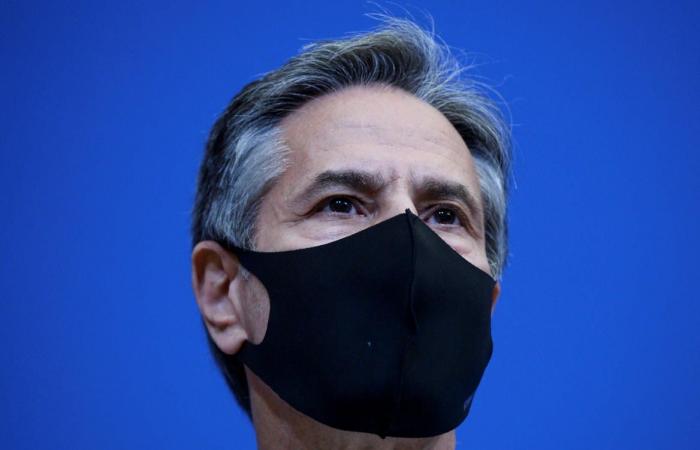 Demonstrations erupted in major Pakistani cities and quickly turned violent after Saad Rizvi, the head of the TLP, was arrested on Monday.

“We have decided to slap a ban on the TLP,” he said. “A file (for the purpose) is being dispatched to the federal Cabinet for formal approval.”

“The police personnel who were kidnapped (by the protesters) have also reached back to their respective police stations,” he said, adding that demonstrators had blocked ambulances and obstructed oxygen supply to the hospitals as a third wave of the coronavirus swept through the country.

The minister also ruled out negotiations with the protesters and said their demands would not be met.

On Sunday, a day before his arrest, TLP chief Rizvi had threatened the government with protests if it did not expel France’s envoy to Islamabad over blasphemous caricatures of the Prophet Muhammad. Rizvi had called on the government to honor what he said was a commitment made to his party in February to expel the French envoy before April 20 over the publication in France of depictions of the Prophet, which enraged Muslims around the world.

The government of Prime Minister Imran Khan said that it had only committed to debating the matter in parliament.

The interior minister congratulated law enforcement officials for clearing all blocked roads, including motorways, in eight to 10 hours.

“They (the protesters) were well prepared and wanted to reach Islamabad at any cost,” Ahmed said, adding that the government had tried its best to resolve the issue through negotiations, but failed to convince TLP leaders.

“We are banning them not for any political reason, but due to their character,” he said, adding that if the government met the TLP’s demands, it would send the world a signal that Pakistan was an “extremist state.”

Earlier in the day, the interior minister had said while chairing a meeting to review the violence: “The writ of the state must be ensured at any cost.”

Law minister and spokesperson for the Sindh government, Murtaza Waha, said that 254 people had been arrested and detained in the province since Monday.

He told Arab News: “254 have been arrested and detained whereas 15 FIRs (police reports) have been registered.”

Pakistani Taliban come out in support of TLP

Meanwhile, the Pakistani Taliban came out in support of the TLP protesters, congratulating them for putting up resistance against security forces.

“(We) pay them (the TLP) tribute for their courage and showing the military organizations their place,” the Taliban said in a statement. “We assure them that we will make them (the government) accountable for every drop of the martyrs’ blood,” they added, referring to TLP claims that its supporters had been killed in clashes with authorities.

The Pakistani Taliban, a different entity from the Afghan Taliban and fighting to overthrow the Pakistan government, are an umbrella of the militant group Tehrik-e-Taliban Pakistan (TTP), which has broken into many divisions.

Designated a terrorist group by the US, the TTP has been in disarray in recent years, especially after several of its top leaders were killed by US drone strikes on both sides of the Pakistan-Afghanistan border, forcing its members into shelter in Afghanistan or flee to urban Pakistan.

“We want to remind them (the TLP) that this government and security institutions are always untrustworthy, breachers of promise and liars so they should not be trusted and military effort is the only solution to this problem,” the Taliban statement said.

In a press conference on Tuesday evening, science and technology minister Chaudhry Fawad Hussain said: “No group or party must even think of dictating to the government or the state . . . If a state allows this, then it will disintegrate and there will be chaos.”

In a separate statement, the TLP said that its protests would continue until Rizvi was released.

On Tuesday, the government of Punjab said that troops of Pakistan Rangers (Punjab) were “required with immediate effect till the request of de-requisition.”

Rangers were deployed in the cities of Rahim Yar Khan, Sheikhupura, Chakwal and Gujranwala, the circular said.

Lahore police spokesperson, Rana Arif, told the daily Dawn newspaper that protesters had beaten a police constable to death in Lahore’s Shahdara area on Tuesday, as a result of which a police case had been registered against TLP leaders and supporters. Police had also registered a case against Rizvi on terrorism and other charges, Arif said.

“Over 300 policemen in Punjab, including 97 in Lahore, had sustained injuries, many of them serious, after violent protesters attacked them with clubs, bricks and firearms,” Dawn reported. “The Gujrat district police officer and Kharian deputy superintendent of police were among the injured.”

“Hundreds of protesters and policemen were injured and thousands of TLP activists and supporters were arrested and booked for attacking law enforcement personnel and blocking main roads and highways,” Dawn added, saying four people, including a policeman, had been killed.

Police said that four policemen had been shot by armed TLP protesters, and the use of firearms by demonstrators had taken law enforcement agencies by surprise.

“In Lahore alone, four policemen were shot at and injured by the armed men of the TLP in the Shahpur Kanjran area. Similarly, two police constables were shot at and injured in Faisalabad,” Dawn reported. It added: “Two video clips from Lahore in this regard showed policemen, Imran and Aslam, being rushed to a hospital with bullet wounds. In another video clip, an on-duty policeman was seen calling for help to dispatch more forces, saying they had come under armed attack by the protesters in Shahpur Kanjran.”

Under a standing order, he said, unarmed police had been deployed and allowed only to use anti-riot gear against protesters. “But it shocked us that the TLP men used guns against the anti-riot force,” Kiani said.

Giving one example, Kiani said that when police reached Shahpur Kanjran to clear the national highway, announcements were made in nearby mosques urging TLP followers to take on police.

“Within 10 minutes, some 200 people joined those already present and attacked police,” he said, adding that Lahore police had lodged 19 cases against protesters and cleared the areas of Shahdara, Imamia Colony, Thokar Niaz Baig, Babu Sabu and some parts of Ring Road by Tuesday evening.

The Shahdara and Thokar areas of Lahore also turned into battlefields after hundreds of TLP supporters took several policemen hostage.

In Shahdara, a constable died from head and chest injuries after protesters tortured him with clubs, police said.

Police said that TLP activists had occupied and blocked 22 main roads, intersections and areas of Lahore, while reports of violence had also come from Faisalabad, Sheikhupura, Rahim Yar Khan, Sahiwal and Gujrat.

Reports from other parts of Punjab suggested TLP supporters had occupied more than 100 points, roads and major intersections of various cities of the province.

More than 1,400 activists of the TLP have been arrested across Punjab, a Punjab police spokesperson told Dawn, saying police had launched major operations, cleared nearly 60 roads and areas, and registered multiple police cases against supporters, representatives and leaders of the TLP.

Speaking to Arab News, Muhammad Ali, a TLP spokesperson in Karachi, said that at least six workers of the party had died and a large number were wounded after being fired on by law enforcement agencies. Hospital and rescue sources only confirmed two deaths.

In a statement released on Tuesday, the TLP said seven of its supporters had been killed by police, but the figures could not be independently verified.

Saad Rizvi became the leader of the Tehreek-e-Labiak Pakistan party in November last year after the sudden death of his father, Khadim Hussein Rizvi.

Tehreek-e-Labiak and other religious parties have denounced French President Emmanuel Macron since October last year, saying he tried to defend caricatures of the Prophet Muhammad as freedom of expression.

Macron’s comments came after a young Muslim beheaded a French school teacher who had shown caricatures of the Prophet Muhammad in class. The images had been republished by the satirical magazine Charlie Hebdo to mark the opening of the trial over the deadly 2015 attack against the publication for the original caricatures. That enraged many Muslims in Pakistan and elsewhere who believe the depictions are blasphemous.

Rizvi’s party gained prominence in Pakistan’s 2018 federal elections, campaigning to defend the country’s blasphemy law, which calls for the death penalty for anyone who insults Islam. It also has a history of staging protests and sit-ins to pressure the government to accept its demands.

In November 2017, Rizvi’s followers staged a 21-day protest and sit-in after a reference to the sanctity of the Prophet Muhammad was removed from the text of a government form.

These were the details of the news Blinken in unannounced visit to Afghanistan to sell US troop withdrawal for this day. We hope that we have succeeded by giving you the full details and information. To follow all our news, you can subscribe to the alerts system or to one of our different systems to provide you with all that is new.