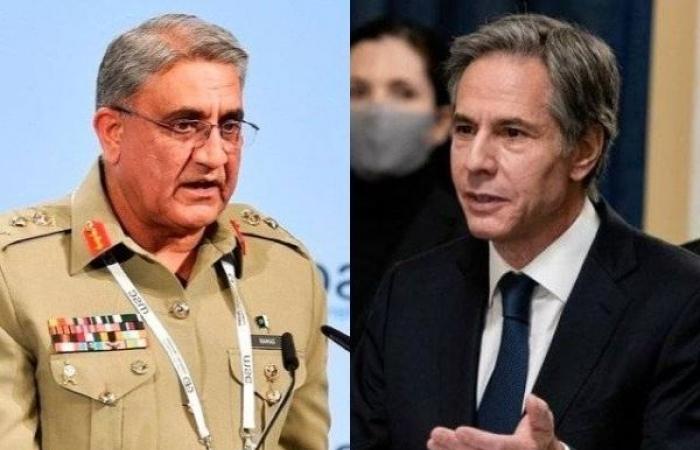 According to the statement, matters of mutual interest, regional security situation including the latest developments in the Afghan peace process, and bilateral cooperation in various fields were discussed during the phone talk.

The Pakistani army chief said that Pakistan will always support an Afghan-led and Afghan-owned peace process based on the mutual consensus of all stakeholders.

The US secretary of state “acknowledged Pakistan’s continuous efforts for peace and stability in the region and pledged to further enhance bilateral relations between both countries," the Pakistani army said in the statement.

The Pakistan army commands considerable power in the matters of security and foreign policy of the country.

The talks took place on the day when Blinken announced that NATO-led coalition troops in Afghanistan will leave the country in coordination with a planned US withdrawal by Sept. 11, ahead of a formal announcement of the end of two decades of fighting.

The US secretary of state said in Brussels that it was time for NATO allies to make good on its mantra that allies went into Afghanistan together and would leave together.

"I am here to work closely with our allies, with the (NATO) secretary-general, on the principle that we have established from the start: In together, adapt together and out together," Blinken said in a televised statement at NATO headquarters.

"We will work very closely together in the months ahead on a safe, deliberate, and coordinated withdrawal of our forces from Afghanistan," Blinken said, standing alongside NATO Secretary-General Jens Stoltenberg. — Agencies

These were the details of the news US secretary of state discusses Afghan peace process with Pakistan army chief for this day. We hope that we have succeeded by giving you the full details and information. To follow all our news, you can subscribe to the alerts system or to one of our different systems to provide you with all that is new.