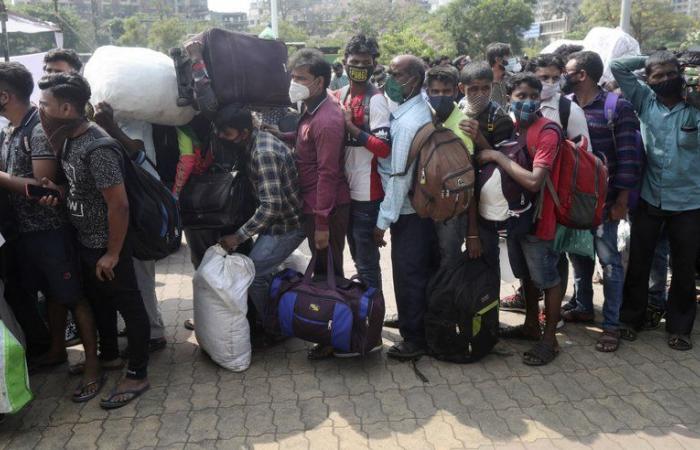 You are now following the details of the Asia Today: India overtakes Brazil as 2nd-worst hit country news and now we leave you with the details

The 168,912 cases added in the last 24 hours pushed India’s total to 13.5 million, while Brazil has 13.4 million, according to data compiled by Johns Hopkins University.

India also reported 904 deaths in the past 24 hours, taking its total to 170,179, which is the fourth highest toll, behind the United States, Brazil and Mexico.

India is experiencing its worst surge of the pandemic, with a seven-day rolling average of more than 130,000 cases per day. Hospitals across the country are becoming overwhelmed with patients, and experts worry the worst is yet to come.

The latest surge also coincides with the shortage of vaccines in some Indian states, including western Maharashtra state, home to financial capital Mumbai, which is the worst hit state and has recorded nearly half of the country’s new infections in the past two weeks.

— The hard-hit Philippine capital and four nearby provinces were placed under a lighter coronavirus lockdown Monday to avoid further damage to an already battered economy despite a continuing surge in infections and deaths. Presidential spokesman Harry Roque said Metropolitan Manila and the provinces of Bulacan, Cavite, Laguna and Rizal, a region of more than 25 million people, would remain under lighter quarantine restrictions up to the end of April after a two-week hard lockdown. “Our emerging strategy is to increase our bed capacities instead of closing the economy,” said Roque, who spoke in a televised news briefing from a Manila hospital after contracting COVID-19 like many Cabinet members. The Philippines has long been a Southeast Asian coronavirus hotspot, with about 865,000 confirmed infections and nearly 15,000 deaths.

— New Zealand is requiring that all border workers be vaccinated against the coronavirus by the end of the month. Prime Minister Jacinda Ardern said Monday that beginning immediately, employers would need to consider alternative options for any of their employees who haven’t been vaccinated. That could mean those workers are redeployed to roles away from the border or fired. Ardern had previously set April as a deadline for vaccinating frontline workers but on Monday talked about it in stronger terms after three workers at a quarantine facility caught the virus. New Zealand has stamped out the spread of the virus within the community, so returning travelers who may have caught COVID-19 abroad are considered the biggest vulnerability.

— Tokyo adopted tougher measures against the coronavirus as it struggles to curb the rapid spread of a more contagious variant ahead of the Olympics in a country where less than 1% of people have been vaccinated. Japan expanded its vaccination drive Monday to older residents, with the first shots being given in about 120 selected places around the country. The tougher COVID-19 rules allow Tokyo’s governor to mandate shorter opening hours for bars and restaurants, punish violators and compensate those who comply. Tokyo Gov. Yuriko Koike urged residents to be cautious while vaccinations are in an early stage.

— Bhutan’s COVID-19 vaccination drive was fast from the start. As other countries rolled out their vaccination campaigns over months, Bhutan is nearly done just 16 days after it started. The tiny Himalayan kingdom has vaccinated nearly 93% of its adults. Its small population helped Bhutan move fast, but dedicated volunteers and the use of cold chain storage from earlier vaccination drives are credited as well. Bhutan distributed the shots to coincide with auspicious dates in Buddhist astrology and the recipient and provider of the first shot were women born in the Year of the Monkey.

— The new mayor of South Korea’s capital demanded swift approval of coronavirus self-testing kits, saying that his city urgently needs more tools to fight the pandemic and keep struggling businesses open. Oh Se-hoon spoke Monday as Seoul and nearby metropolitan towns shut down hostess bars, night clubs and other high-risk entertainment venues to slow transmissions. Similar businesses were also shut down in the southern port city of Busan. The Korea Disease Control and Prevention Agency said 350 of the country’s 587 new cases were from the greater Seoul area. Kwon Jun-wook, director of South Korea’s National Health Institute, said earlier this month that authorities are reviewing whether to approve rapid home tests. But the review has proceeded slowly with some experts saying such tests would do more harm than good because they are less accurate than standard laboratory tests.

These were the details of the news Asia Today: India overtakes Brazil as 2nd-worst hit country for this day. We hope that we have succeeded by giving you the full details and information. To follow all our news, you can subscribe to the alerts system or to one of our different systems to provide you with all that is new.