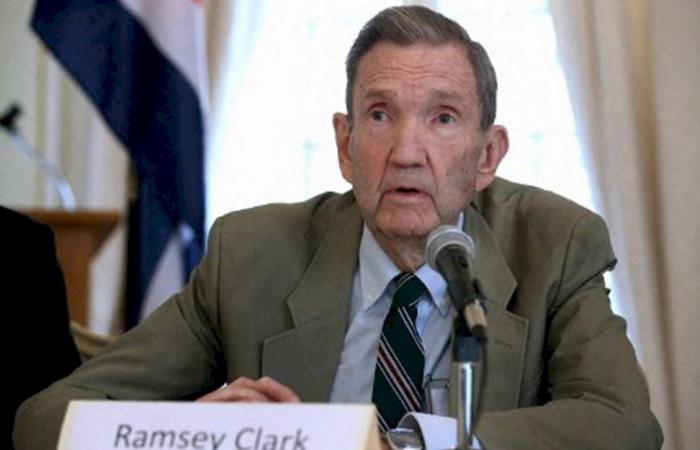 Hello and welcome to the details of Ramsey Clark, ex-US justice official and Saddam Hussein’s lawyer, dies at 93 and now with the details

The often controversial liberal figure and former attorney general died April 9 at his home in New York City, a niece, Sharon Welch, told US media. No cause of death was given.

But he also filed the first school desegregation and voting rights suits in the US North.

Within years of leaving government in 1969, he had become a stunningly direct critic of US foreign policy, which he called “genocidal,” and of military spending, which he termed “certifiably insane.”

Defender of the Unpopular

He became a defender of unpopular figures and causes, including Saddam Hussein, Slobodan Milosevic, the ex-Yugoslav president accused of war crimes, and Mumia Abu-Jamal, a former Black Panther jailed in Pennsylvania for killing a policeman.

Everyone, however unpopular, deserved a proper defense, he insisted.

Clark’s death was mourned yesterday by figures ranging from Palestinian activist Hanan Ashrawi, who tweeted that he was “an indefatigable defender of Palestinian & human rights,” to Cuban President Miguel Diaz-Canel, who said Clark had “denounced the great injustices committed by his country worldwide.”

Despite Clark’s criticism of US policies, president Jimmy Carter turned to him to attempt to negotiate the release of the 53 American hostages held in Tehran in 1979.

Though his effort failed, Clark later returned to Iran on his own and said the continuing hostage taking was “understandable”. He urged the US to apologize to Iran for misdeeds, drawing a warning from a furious Carter that he could be prosecuted for violating a travel ban.

Clark met with Communist officials in Hanoi during the Vietnam War and blasted US conduct there. He sued the US government for bombing Libya after a 1986 terror attack in Berlin, and he opposed the US wars with Iraq.

In 1990, then head of Amnesty USA John Healey called Clark “one of the most respected advocates for human rights in the world today.”

Born in Dallas in 1927, Clark joined the Marine Corps in 1945 and served as a courier in Europe, where he witnessed the devastation wrought by the war.

Returning to the US, he earned a law degree from the University of Chicago. His father had been a Supreme Court justice who resigned to avoid an appearance of conflict of interest.

In 1961, Ramsey Clark went to work for Robert Kennedy’s Justice Department, gaining a reputation as an efficient administrator, and in 1967 was named by Johnson, a fellow Texan, to head the department.

He was involved in drafting the landmark Civil Rights Act of 1968; he also ordered an end to federal executions.

Clark later ran twice for the US Senate from New York.

These were the details of the news Ramsey Clark, ex-US justice official and Saddam Hussein’s lawyer, dies at 93 for this day. We hope that we have succeeded by giving you the full details and information. To follow all our news, you can subscribe to the alerts system or to one of our different systems to provide you with all that is new.