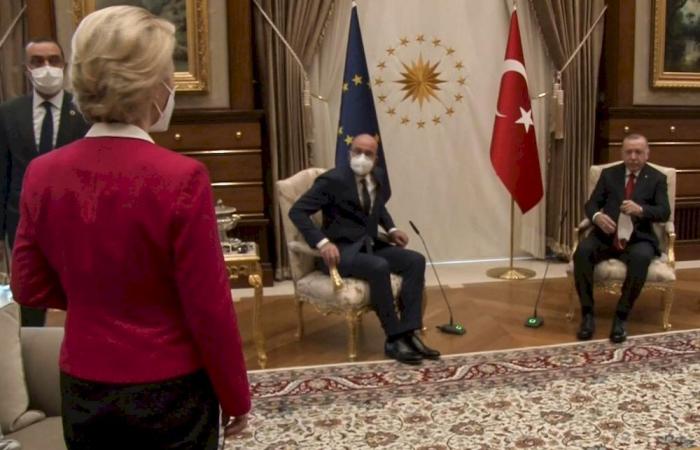 ISTANBUL, April 8 — Turkey today blamed the European Union for seating arrangements that left European Commission chief Ursula von der Leyen without a chair during a meeting with the Turkish president.

Recep Tayyip Erdogan and his officials came under heavy criticism after images went viral of his Tuesday meeting with von der Leyen and European Council president Charles Michel in Ankara.

The room where the three leaders were hosted had only two chairs arranged next to the corresponding EU and Turkish flags.

Erdogan and Michel quickly seated themselves while von der Leyen — whose diplomatic rank is the same as that of the two men — was left standing.

“Ehm,” she said as she spread her arms in wonder and looked directly at Michel and Erdogan.

Official images later showed her seated on a sofa opposite Turkish Foreign Minister Mevlut Cavusoglu, who said today that criticism of Turkey for the diplomatic blunder was “unfair”.

“The seating arrangements were made in line with the EU suggestion. Period. We would not be revealing this fact had accusations not been made against Turkey,” Cavusoglu told reporters.

“The demands and suggestions of the EU side were met and the proper protocol applied during the meeting.”

The diplomatic faux pas was instantly branded “sofagate” on Twitter and became the dominant talking point of the first Turkey-EU summit in a year.

The three leaders were trying to set a more positive tone after months of spats.

But it ended with European officials throwing accusations of male chauvinism at Turkey, which last month withdrew from an international accord on gender-based violence.

“First they withdraw from the Istanbul Convention and now they leave the President of European Commission without a seat in an official visit. Shameful,” wrote Spanish MEP Iratxe Garcia Perez.

Some also questioned why Michel was so quick to take a seat.

The European Council president broke nearly a full day of silence by writing on Facebook that although it seemed like he was “oblivious” to the situation, it was a “protocol blunder” by Turkey.

The two EU leaders “chose not to worsen it by making a public incident”, Michel wrote.

Von der Leyen used a post-summit press conference to stress that she had a long and interesting discussion with Erdogan about women’s rights, and a commission spokesman suggested later that the incident had “sharpened her focus”.

But Cavusoglu said Turkey knew perfectly how to follow diplomatic protocol and was complying with the instructions of an EU planning delegation.

“The meetings — especially in Turkey — are held within the framework of international protocol rules and Turkish hospitality,” Cavusoglu said.

The European Union is under mounting pressure over its slow coronavirus inoculation effort and strains emerging between the bloc’s 27 member states.

The conservative EPP grouping is demanding a full debate in the European Parliament on the issue, with leader Manfred Weber telling Politico the trip to Ankara had become “a symbol of disunity” between the EU’s top officials.

Spain’s Garcia also said she had asked for a debate and wanted von der Leyen and Michel to appear.

“EU-Turkey relations are crucial. But #EU unity and respect for human rights, including women’s rights, are also key,” she tweeted.

French far-right leader Marine Le Pen said the entire visit was a bad idea because it showed the bloc “lying down before a hostile” Erdogan.

The bloc is next expected to address its relations with Turkey at a European Council leaders’ meeting on June 24-25. — AFP

These were the details of the news Turkey blames EU for ‘sofagate’ scandal for this day. We hope that we have succeeded by giving you the full details and information. To follow all our news, you can subscribe to the alerts system or to one of our different systems to provide you with all that is new.