EU slams Turkey over its withdrawal from domestic violence treaty 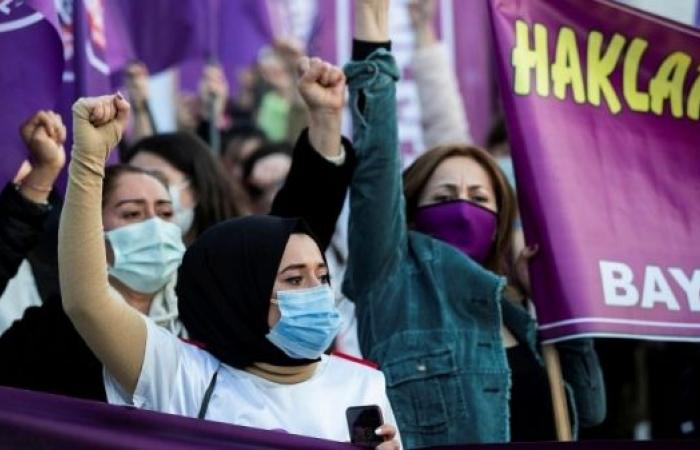 The meeting in Ankara centered around the need for a new deal to support Turkey’s hosting of some four million refugees, deeper economic ties, and cooperation on foreign policy issues.

But in the press conference that followed, EU Commission President Ursula von der Leyen made clear her feelings on Erdogan’s decision to withdraw from the convention and his attitude to the rule of law.

“I am deeply worried about the fact Turkey withdrew from the Istanbul Convention. This is about protecting women and children against violence. The EU will never hesitate to point out further negative actions,” she said.

The issue is “hampering the process” she added.

Speaking alongside the Commission president, European Council President Charles Michel said: “The rule of law and respect of fundamental rights are co-values of the EU. We shared with president Erdogan our deep worries on the latest developments in Turkey in this respect, in particular freedom of speech and the targeting of political parties and media.”

Many of those refugees want to reach Europe. In 2016 the EU paid Turkey 6 billion euros to prevent them from crossing to Greece, but that deal has run its course.

“In sum, we want to move forward toward much better relations in the future, but we are at the beginning of this road, and the weeks and months ahead will show how far we can go on this road together,” said von der Leyen.

In the press conference, Michel said Turkey’s withdrawal from the Istanbul Convention — of which it was the first signatory 10 years ago — had caused “serious concerns in Europe.”

The landmark European treaty is intended to protect women and children from violence, and Turkey’s withdrawal sparked a wave of anger at a time when attacks have been on the rise.

Turkey became a candidate nation for EU membership 22 years ago, but its road to accession has been frozen since 2018, when the EU pointed to what it called Turkey’s backsliding regarding democracy, rule of law, and fundamental rights.

Since then Turkey has been butting heads with the EU over a range of issues, including the divided island of Cyprus, refugees from the Middle East, and repeated crackdowns on protests in the country.

These were the details of the news EU slams Turkey over its withdrawal from domestic violence treaty for this day. We hope that we have succeeded by giving you the full details and information. To follow all our news, you can subscribe to the alerts system or to one of our different systems to provide you with all that is new.