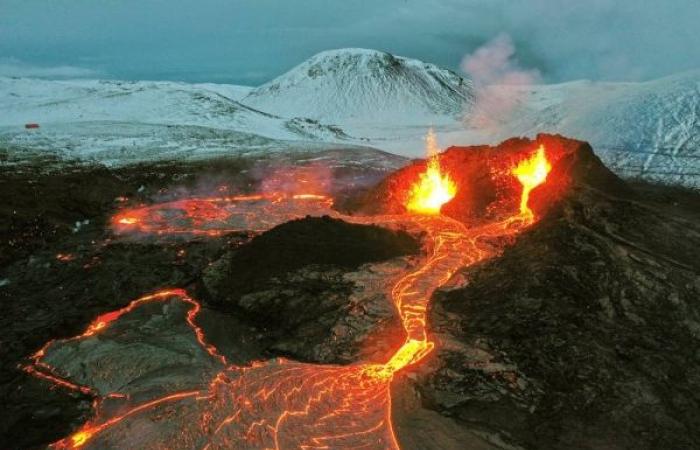 Hind Al Soulia - Riyadh - REYKJAVIK — Steam and lava spurted Monday from a new fissure at an Icelandic volcano that began erupting last month, prompting the evacuation of hundreds of hikers who had come to see the spectacle.

The new fissure, first spotted by a sightseeing helicopter, was about 500 meters (550 yards) long and about a kilometer (around a half-mile) from the original eruption site in the Geldinga Valley.

The Icelandic Department of Emergency Management announced an immediate evacuation of the area. It said there was no imminent danger to life due to the site’s distance from popular hiking paths.

"We had two new cracks opening up right around where people were walking, so [...] we just clear out the area to figure out what is happening," said Sigurjon Veigar, search and rescue team member.

Live footage from the area showed small spouts of lava coming from the new fissure.

The long-dormant volcano on the Reykjanes Peninsula in southwest Iceland flared to life on March 20 after tens of thousands of earthquakes were recorded in the area in the past three weeks.

It was the area’s first volcanic eruption in nearly 800 years.

The volcano’s proximity to Iceland’s capital, Reykjavík, about 32 kilometers (20 miles) away, has brought a steady stream of tourists to the area, even with the country in partial lockdown to combat the coronavirus.

Around 30,000 people have visited the area since the eruption began, according to the Icelandic Tourist Board. — Euronews

These were the details of the news Hikers evacuated as lava spews from new fissures in Iceland volcano for this day. We hope that we have succeeded by giving you the full details and information. To follow all our news, you can subscribe to the alerts system or to one of our different systems to provide you with all that is new.

PREV Drop in Xinjiang birthrate largest in recent history: report
NEXT Gunman kills 6, then himself, at birthday party in Colorado