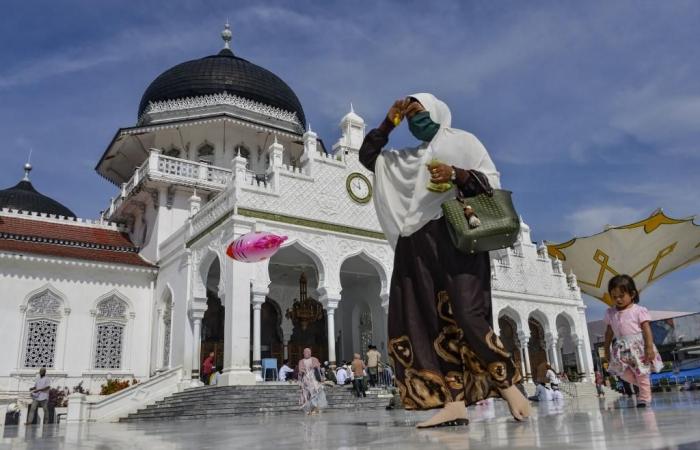 Thank you for reading the news about Work is worship: Indonesia’s 5,000 mosque counters seek to answer one question and now with the details

Jeddah - Yasmine El Tohamy - JAKARTA: Fakhry Affan could easily qualify as a human catalog with information on every Muslim place of worship across Indonesia.
For the past seven years, the official from the Ministry of Religious Affairs (MRA) has been in charge of its Sistem Informasi Masjid (SIMAS), or Mosque Information System — a digitized database to find out how many mosques the world’s largest Muslim majority nation has.
“This is a never-ending job with new mosques and musallas constructed all the time,” Affan told Arab News.
A musalla is an open space outside a mosque, mainly used for prayer.
The idea is to get the best estimate on the number of mosques in the country, where more than 80 percent of its 270 million population is Muslim.
Affan said that before the SIMAS’ establishment in 2013, various agencies had issued different estimates on the total number of mosques in the country without providing any official reference.
The ministry’s manual data itself listed more than 741,000 mosques, while then-Vice President Jusuf Kalla was quoted in 2018 as saying that there were more mosques than schools in the country and that “only God knows” how many mosques Indonesia had.
“We were challenged by the difference in the numbers, so we started digitalizing the data in 2013 to verify and validate our manual data,” Affan told Arab News.
Helping him with the project is a dedicated team of 5,000 MRA personnel, down to the sub-district level across Indonesia.
Their task? To register and digitize data on the various sites, irrespective of size, where Muslims can pray in the respective areas.
Each place registered, from the Istiqlal Mosque — the state mosque in the capital Jakarta — to a prayer room inside a restaurant, gets its own identification number, with a brief description of the place and how to get there.
“We register them all one by one. If, for example, a mall has more than one prayer room located on different floors of the building, we list each prayer room individually,” Affan said.
It is a common sight in Indonesia to find mosque signage outside an eatery, to inform Muslim customers that they have a place to pray in the vicinity.
When Arab News interviewed Affan last Monday, his team had gathered information on 599,486 mosques and musallas.
“In 10 minutes, the number could change. It’s constantly updated by colleagues nationwide,” he said.
As of Saturday, that number had increased to 600,581 — almost 80 percent from the manual number provided and out of the 90 percent target that Affan and his team aim to reach by the year-end.
There are hurdles, of course, Affan said, such as collecting data from the country’s eastern region and remote, far-flung islands in the sprawling archipelago of 17,000 islands, which usually trickles in due to slow Internet connectivity.
The team also deploys a drone to get pictures of the mosque and its surroundings from various angles. Many mosques are too big to capture with a regular camera or are located in a densely populated neighborhood with narrow alleys, making it challenging to get a complete photograph.
Since 99 percent of the mosques are constructed and maintained by the local community, Muhammad Agus Salim, the MRA’s director of Islamic affairs and Sharia development, said that having an official and verified mosque catalog would serve as a “basic reference” for government policies related to mosques, such as local community empowerment, construction and renovation, water and sanitation improvement, caretakers’ capacity building, and religious moderation to prevent mosques from becoming a place that spread extreme Islamic teachings.
“This data collection is crucial in mapping Muslims’ potential in Indonesia. We did not have official data on imams, mosque caretakers and youth clubs, so we were unable to allocate a budget to mosques development,” Salim told Arab News.
Developing youth clubs would also encourage young people to become mosque activists and imams, he added.
It would also ensure transparency in alms’ collections and donations, for which the MRA is working with financial authorities to allow mosques with verified data to open a Shariah bank account as well.
Secretary-general of the Indonesian Mosque Council (DMI), Imam Addaqurutni, told Arab News that the DMI has been working on a similar project for three years.
“We have an open database to which anyone can enter data of a mosque with its coordinates. Once an entry is completed, we will lock it in for verification. We will use the data to develop mosques to be more than just a venue for religious activities,” he said.
Recently, DMI chairman, Jusuf Kalla, said that the government had welcomed the council’s proposal to use mosques as COVID-19 vaccination centers for senior citizens from next month.
Since the two and a half months of rolling out the vaccination campaign, about 3,000 people in three priority groups — medical workers, frontline and public workers, and senior citizens — have received their second jab, while almost 7,000 have had their first jab, out of 40,349,051 in the three groups.
The move is part of the government’s plan to vaccinate 181.5 million by year-end and reach herd immunity.
“We are finalizing the mechanism with the Health Ministry to accelerate the number of senior citizens getting vaccinated,” Addaqurutni said.

These were the details of the news Work is worship: Indonesia’s 5,000 mosque counters seek to answer one question for this day. We hope that we have succeeded by giving you the full details and information. To follow all our news, you can subscribe to the alerts system or to one of our different systems to provide you with all that is new.