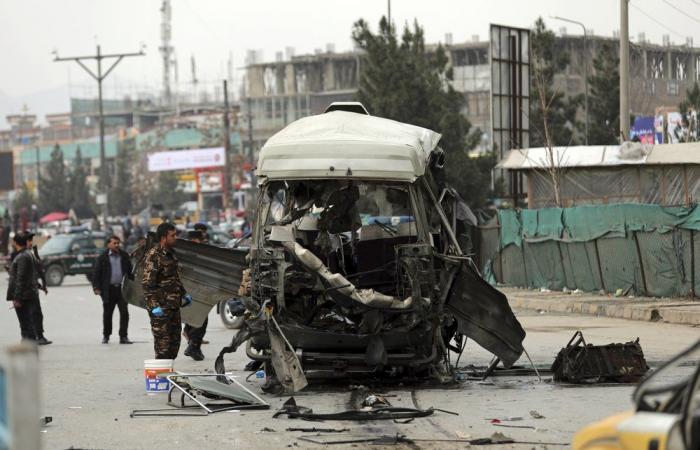 The primitive devices, sometimes made in mechanics’ workshops for little money, are used by militants, criminals or those trying to settle personal scores. Over the past year, one or more cars have been exploding in Kabul almost every day and residents are terrified.

The administration of President Joe Biden has alternated between coaxing and sharp words — even offering a ready-made peace proposal — to hurry the Taliban and the Afghan government toward an end to the conflict. In the Afghan capital last weekend, US Secretary of Defense Lloyd Austin said America wanted a “responsible end” to Afghanistan’s relentless war. But in the meantime violence is escalating and taking the occasional new twist, such as the sticky bombs.

Kabul, a city traumatized by war, has been the scene of many suicide bombings and shooting attacks. But the heavy use of sticky bombs is relatively new, said former interior minister Masoud Andarabi. “What is new is that they (attackers) have created a simple model,” he said, noting that sticky bombs are easy to make for about $25 and easy to carry.

Some victims are targeted, while others appear to have been chosen at random, with the aim of terrorizing an entire population, Andarabi said. One motive appears to be to undermine faith in peace efforts among ordinary Afghans, with the Taliban and the government blaming each other the chaos.

The campaign has had an impact, leaving motorists navigating Kabul’s chaotic traffic wondering if the nearby car might explode, or whether a beggar weaving through the traffic might be carrying a sticky bomb.

Typically, sticky bombs consist of explosives packed in a small box, a magnet attached to the box and a mobile phone. The bomb-maker programs a number in the phone number and dials it, with the last digit setting off the blast once he is clear of the targeted car.

Tactics vary, say security forces. Occasionally, a small child begging for money will be used to distract the driver, while the bomber sticks the small box under the wheel well. A new ruse is to drop the sticky bomb from inside a hole cut near the gearshift of the attacker’s vehicle as the target vehicle approaches from behind. When the target is over the small bomb it is detonated.

In January, a mechanic was arrested in Kabul’s destitute Shah Shaheed area, where ramshackle shops line up tightly against each other. Abdul Sami, 30, was accused of putting sticky bombs inside newly repaired vehicles.

Sami’s shop was one of more than a dozen workshops and spare parts shops on a rutted road in Shah Shaheed. It’s now shuttered and the tattered sign that once welcomed customers has been removed.

In 2015 the neighborhood was blown apart by a powerful truck bomb that killed 15 people and injured nearly 150. Ruins from that day still litter the local landscape.

Most of the mechanics in the area knew Sami, who was accused by security forces of putting sticky bombs on random cars, not particularly targeting anyone. Like the other mechanics, Sami was poor, making around $6 on some days and nothing on many other days, said Massoud, a mechanic who wanted to give only his first name for fear of attracting the attention of government security forces.

Since Sami’s arrest, police and security personnel have hovered in the area, interrogating mechanics, watching them.

Massoud was reluctant to talk.

“We never knew he was involved with sticky bombs, ” he said. “We still don’t know if he was doing it. The security officials came and arrested him, we never knew that he was doing anything wrong.”

Sticky bombs have targeted journalists, members of the judiciary and reformers from Afghanistan’s nascent civil society. But Andarabi, the former interior minister, said attacks have also been random and unpredictable, designed to terrorize and cast the government as incompetent and unable to protect its citizens.

Andarabi blamed the Taliban, while the insurgent group pointed the finger at the security forces, claiming they use the bombings to discredit the Taliban and sabotage peace talks to stay in power.

The Islamic State group affiliate, fought by both the government and the Taliban, has claimed many of the attacks, particularly those targeting journalists, the judiciary and civil society.

A former intelligence chief said mechanics are typically just pawns in the network that plans these attacks.

“They’re not ideologues. Someone like the mechanic is just poor, maybe even threatened: ‘If you don’t do this then your family will be in danger.’ I think then anyone would do it,” said Rahmatullah Nabil, a former head of Afghanistan’s intelligence, known as the NDS.

Massoud, the mechanic, said he worries with every new customer. “Whenever a driver brings in his vehicle for repairs I am afraid there might be a sticky bomb somewhere on the car,” he said. He said he fears he could find himself in jail, accused of planting the explosives.

Kabul taxi driver Dil Agha said he’s afraid of children and panhandlers jostling among the cars and tries to stay clear of government vehicles, in case they are targeted. Agha said he worries every day on the job might be his last.

“We are afraid of everyone, the street children and the beggars, who might put the sticky bomb on our cars, especially in a crowded area,” he said.

IMAGE: Security personnel inspect the site of a sticky bomb attack in Kabul, Afghanistan, March 15, 2021. Sticky bombs slapped onto cars trapped in Kabul’s chaotic traffic are the newest weapons terrorizing Afghans in the increasingly lawless nation. The surge of bombings comes as Washington searches for a responsible exit from decades of war. (AP Photo/Rahmat Gul)

These were the details of the news Sticky bombs latest weapon in Afghanistan’s arsenal of war for this day. We hope that we have succeeded by giving you the full details and information. To follow all our news, you can subscribe to the alerts system or to one of our different systems to provide you with all that is new.