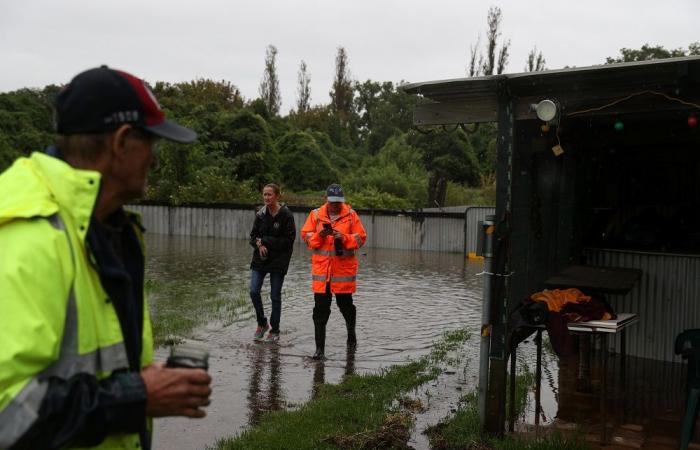 The region has been devastated by widespread flooding brought on by a torrential downpour that inundated towns, destroyed farmland and left two people dead.

With the rain clouds finally clearing to reveal blue skies, thousands of people in Australia’s most populous state New South Wales returned to their homes to assess the damage.

Hundreds of troops and volunteer firefighters bolstered efforts in stretched communities, digging mud from roads and using chainsaws to clear debris from properties.

Ben Shepherd, an inspector from the Rural Fire Service, said the teams wanted “to try and return communities to some sense of normality as soon as possible”.

“This is going to be a prolonged event that is potentially going to take weeks — if not months — in some areas,” he told AFP.

Across the vast flood zone, many communities remain cut off by swollen rivers and it was still unsafe for about 20,000 people to return home.

Authorities pleaded with residents to remain vigilant around floodwaters.

“We believe that most river systems have peaked but complacency is a concern for us,” state Premier Gladys Berejiklian said.

“Unpredictable flows will continue to occur in communities which haven’t seen this amount of rainfall for up to 50 or 100 years.”

Emergency services have responded to more than 11,000 calls for help since the disaster struck late last week, rescuing close to 1,000 people from floodwaters.

Yesterday, officers said they had discovered the remains of a 25-year-old Pakistani man trapped in his car in six metres (20 feet) of floodwater in Sydney’s northwest.

Just hours later, Queensland police said divers had found a second man dead in a vehicle that was upturned in a river on the Gold Coast.

Flooding has extended to parts of the outback, including Moree where television images showed the inland town split into two by a bursting river today.

Meteorologists have forecast sunshine will continue for most affected areas over the coming week.

But close to Sydney near the overflowing Hawkesbury River, the focus remains on ferrying food, medical supplies and other essentials to isolated areas.

Thousands of homes and businesses have been damaged in the flooding, with insurers receiving more than 22,000 claims so far.

When the floods hit, many were still reeling from a prolonged drought and unprecedented bushfires just over a year ago.

Some coastal regions received a metre (three feet) of water in a week, the equivalent of two-thirds of normal annual rainfall.

Scientists have warned Australia can expect more frequent and more extreme weather events as a result of climate change. — AFP

These were the details of the news Australia begins long clean-up as floodwaters recede for this day. We hope that we have succeeded by giving you the full details and information. To follow all our news, you can subscribe to the alerts system or to one of our different systems to provide you with all that is new.

NEXT ‘Families came first’ for remittances in year of pandemic, says Guterres