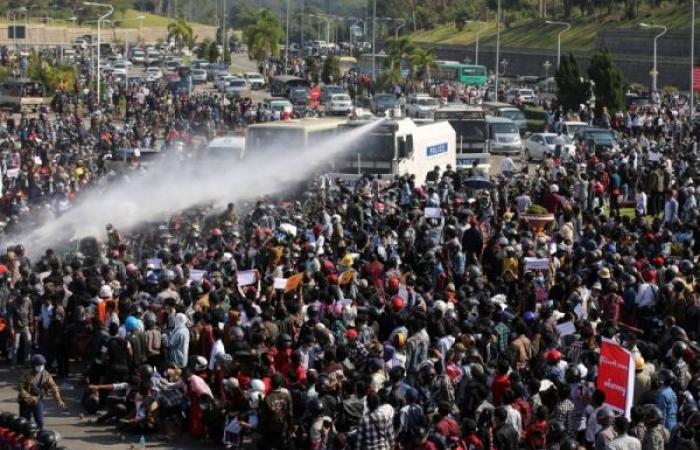 We show you our most important and recent visitors news details Myanmar soldiers kill girl, 7, in father's arms in the following article

Hind Al Soulia - Riyadh - YANGON — Myanmar's security forces shot dead a 7-year-old girl in the city of Mandalay on Tuesday, the youngest victim yet in the military's bloody crackdown on civilian opposition to the Feb. 1 coup.

The young girl was killed in her home during a military raid, according to advocacy group Assistance Association for Political Prisoners (AAPP) and Reuters news agency.

Citing relatives, local news outlet Myanmar Now reported the girl, named Khin Myo Chit, was shot while sitting in her father's lap after security forces kicked down the door to the family's home. Soldiers asked the father if everyone in the family was present in the house -- when the father said yes, they accused him of lying and shot at him, hitting the girl instead, Myanmar Now reported, quoting the victim's older sister.

The ruthless killing of a child in her father's arms fits a pattern of abuse and indiscriminate use of deadly violence from Myanmar's security forces that have targeted not only unarmed protesters and opponents to the coup, but bystanders, civilians in their homes, and children.

Anti-coup protests and strikes have since gripped the nation but are being violently suppressed by the junta's police forces and military soldiers, with widespread reports of shootings, enforced disappearances, and torture of political prisoners.

Despite the dangers, tens of thousands of people across the country continue to protest and take part in a civil disobedience movement. On Wednesday, protesters called for a "silent strike" with businesses and shops set to close and people to stay in their homes, with the aim of shutting down entire towns and cities.

At least 275 people have been killed since the coup, according to AAPP, though activists say the death toll is likely much higher. More than 20 of those deaths are children, the humanitarian organization Save the Children said.

"We are horrified that children continue to be among the targets of these fatal attacks on peaceful protestors. The death of these children is especially concerning given that they reportedly were killed while being at home, where they should have been safe from harm," Save the Children said in a statement Tuesday. "The fact that so many children are being killed on an almost daily basis shows a complete disregard for human life by security forces."

It follows the death of a 15-year-old boy on Monday, also in Mandalay, according to Reuters and local news reports. The boy, who was a Grade-8 student, was one of three people shot dead in the city that day, AAPP reported.

"The fallen child was shot when he strayed out of the house to fill the up water in front of the house," AAPP said.

Myanmar's military has not yet officially commented on the death of the 7-year-old girl but has repeatedly defended security forces' response to the protesters, saying they use minimal force.

On Tuesday, military spokesperson Zaw Min Tun said in a televised news conference he felt "sorry" for citizens' loss of life but blamed protesters for unrest and destruction of property.

"Which country would accept these kinds of violent acts?" he said at a news conference in the capital, Naypyidaw. "We will act according to law if the protest is peaceful. But we will use minimal force and least steps if there is violence."

Military releases some of those detained

At least 2,812 people have been detained since the coup, according to AAPP. As of Tuesday, Save the Children said it has responded to 146 cases of child arrests or detentions, and at least 488 students are currently being held by security forces. Many people have been taken arbitrarily in nighttime raids and their families do not know where their loved ones are, or what condition they are in, the United Nations said.

On Wednesday, several hundred prisoners, arrested during crackdowns against opponents of the coup, were freed from prison, Reuters reported, citing witnesses, lawyers, and local media. Several buses full of prisoners could be seen driving out of Yangon's notorious Insein prison in the morning, though there was no immediate word from authorities on how many were freed.

"All the released are the ones arrested due to the protests, as well as night arrests or those who were out to buy something," a member of a legal advisory group said.

Associated Press (AP) journalist Thein Zaw, who was arrested while covering a protest in Yangon on Feb. 27, was among those released on Wednesday, the news agency said.

He told his family "he has been informed he is being released from detention," AP reported. Thein Zaw had been charged with violating a public order law that carries a penalty of up to three years' imprisonment.

The junta's deadly suppression of peaceful protests has been widely condemned internationally. Zaw Min Tun's comments came a day after the US and European Union imposed further sanctions on groups and individuals linked to the coup and crackdown on protesters.


These were the details of the news Myanmar soldiers kill girl, 7, in father's arms for this day. We hope that we have succeeded by giving you the full details and information. To follow all our news, you can subscribe to the alerts system or to one of our different systems to provide you with all that is new.

NEXT Iran election set to hand presidency to hardline judge