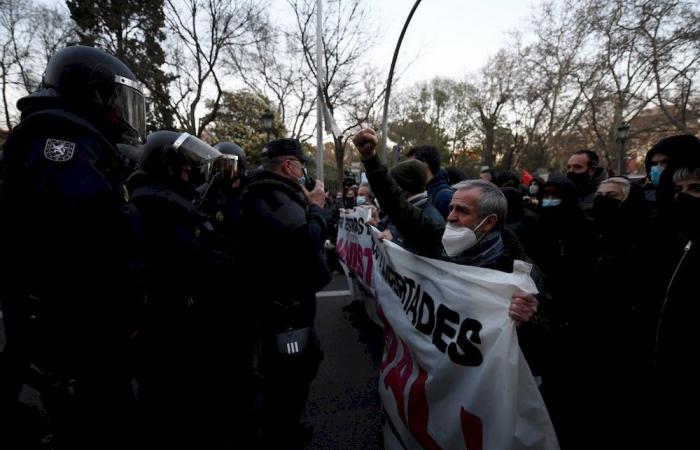 MADRID, Mar 21 — Hundreds of demonstrators yesterday rallied in cities across Spain, including Madrid and Barcelona, calling for the release of a controversial rapper, jailed in mid-February for tweets criticising the royal family and the security forces.

Shouting slogans such as “Freedom for Pablo Hasel” and “We are the anti-fascists”, several hundreds of people took to the streets in the Spanish capital in an unregistered demonstration, according to an AFP reporter.

The march passed off peacefully before the crowds dispersed at the request of the police.

Here, too, the march remained peaceful, in contrast to the demonstrations last month when protesters and police clashed violently.

Rallies were also planned in other Spanish cities such as Palma de Majorca yesterday.

Known for his hard-left views, Hasel was handed a nine-month sentence over tweets glorifying terrorism and videos inciting violence.

The court ruling said freedom of expression could not be used “as a ‘blank cheque’ to praise the perpetrators of terrorism”.

The rapper was also fined about €30,000 (US$36,000) for insults, libel and slander for tweets likening former king Juan Carlos I to a mafia boss and accusing police of torturing and killing demonstrators and migrants.

So far, more than 100 people were arrested in the protests, and scores more injured in the clashes, among them many police officers and a young woman who lost an eye after being hit by a foam round fired by police.

The clashes have also sparked a political row that has exacerbated a divide within Spain’s leftwing coalition, which groups the Socialists of Prime Minister Pedro Sanchez and the hard-left Podemos.

While the Socialists have firmly opposed the violence, Podemos’ leadership has backed the protesters.

The party emerged from the anti-austerity “Indignados” protest movement that occupied squares across Spain in 2011. Their position is that the Hasel case exposes Spain’s “democratic shortcomings”. — AFP

These were the details of the news Protesters march in Spain demanding rapper’s release for this day. We hope that we have succeeded by giving you the full details and information. To follow all our news, you can subscribe to the alerts system or to one of our different systems to provide you with all that is new.