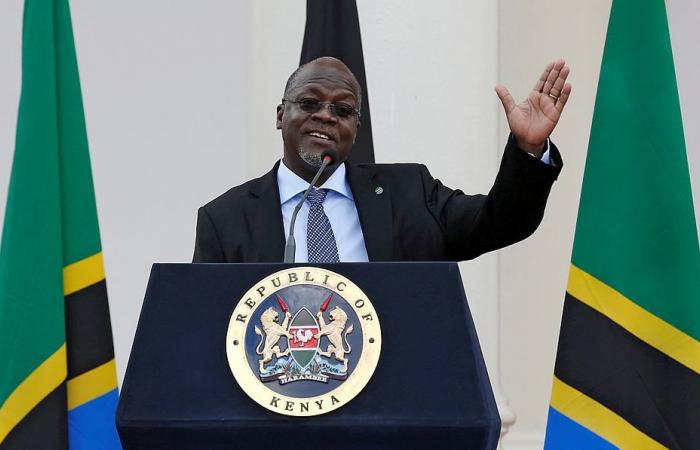 Magufuli, popularly nicknamed the “Bulldozer”, had been missing from public view for almost three weeks, fuelling wild rumours of his ill health, with opposition leaders claiming he had contracted the virus.

“It is with deep regret that I inform you that today on the 17th of March, 2021 at 6:00 pm we lost our brave leader, the President of the Republic of Tanzania, John Pombe Magufuli,” said vice-president Samia Suluhu Hassan.

She said Magufuli had died of a “heart condition” known as chronic atrial fibrillation characterised by an abnormal heartbeat, which he had suffered from for a decade, at a hospital in Dar es Salaam.

He had first been briefly admitted to the Jakaya Kikwete Cardiac Institute on March 6, but was subsequently discharged, Hassan said.

But Magufuli had again felt unwell and was on March 14 rushed to hospital, this time to the Emilio Mzena Memorial Hospital in Dar es Salaam.

Opposition leader Tundu Lissu cited sources saying that the president had caught Covid-19 which had exacerbated his existing health conditions, which could not be independently verified.

Meanwhile demands grew for information on his whereabouts and rumours took off that Magufuli was seeking treatment outside the country.

The president's supporters mourned his death, and the uncertain political road ahead.

“I am saddened personally. I've lost hope because I relied on him as my leader, he was a leader of the poor and now we are wondering how things will be now that our leader has died,” said 24-year-old Lewis, in Dar es Salaam.

Meanwhile the United States State Department expressed condolences, adding: “we hope that Tanzania can move forward on a democratic and prosperous path.”

Magufuli was first elected in 2015 as a corruption-busting man of the people, endearing him to a population weary of graft scandals.

However, a slide into authoritarianism, which saw a crackdown on the media, civil society and opposition, raised alarm among foreign allies and rights groups.

His re-election last October was dismissed by the opposition and some diplomats as a sham, over alleged rigging, the blocking of foreign media and observer teams and an oppressive military presence.

Analysts said that Magufuli had dealt a crushing blow to democracy in one of Africa's most stable nations.

However he also won plaudits for expanding free education, rural electrification and investing in infrastructure projects such as railways, a hydropower dam set to double electricity output and the revival of the national airline.

His government passed a raft of laws to increase Tanzania's stake in its mineral resources and demanded millions in back taxes from foreign mining companies.

But it was Magufuli's handling of the coronavirus pandemic which cast his leadership style into sharp relief.

He was one of a handful of world leaders, alongside former US President Donald Trump and Brazil's Jair Bolsonaro, who scoffed at the virus, championing alternative medicines.

Magufuli called for prayer instead of face masks, before stopping the publication of statistics in April 2020 when the country had recorded a total of 509 cases and 16 deaths.

Tanzania became an outlier in a region which quickly implemented lockdowns, night-time curfews and travel restrictions to stem infections.

In May last year he revealed he had submitted a variety of fruit and animals to be tested for the virus and that a papaya, quail and goat tested positive, proving “sabotage” at the national laboratory.

Magufuli later claimed prayer had saved the country from Covid-19.

“That's why we are all not wearing face masks here. You think we don't fear dying? It's because there is no Covid-19,” he said.

However by February, as illness soared and the vice president of semi-autonomous Zanzibar was revealed to have died from Covid-19, Magufuli conceded the virus did in fact exist.

Nevertheless he warned his health ministry not to rush into procuring vaccines, saying they were “dangerous”.

Under Tanzania's constitution, Hassan will become the country's first female president and will consult the ruling Chama Cha Mapinduzi (CCM) party over the appointing of a new vice president.

Magufuli's death plunges Tanzania into political uncertainty, according to Nic Cheeseman, professor of democracy at the University of Birmingham.

“The news of Magufuli's death will fundamentally reshape Tanzanian politics. Having dominated the political scene since his election, he leaves something of a political vacuum,” Cheeseman said. ― AFP

These were the details of the news Tanzanian President Magufuli dies aged 61 of 'heart condition' for this day. We hope that we have succeeded by giving you the full details and information. To follow all our news, you can subscribe to the alerts system or to one of our different systems to provide you with all that is new.