For Asian-Americans, Atlanta shooting sows fresh fear after a year of mounting discrimination 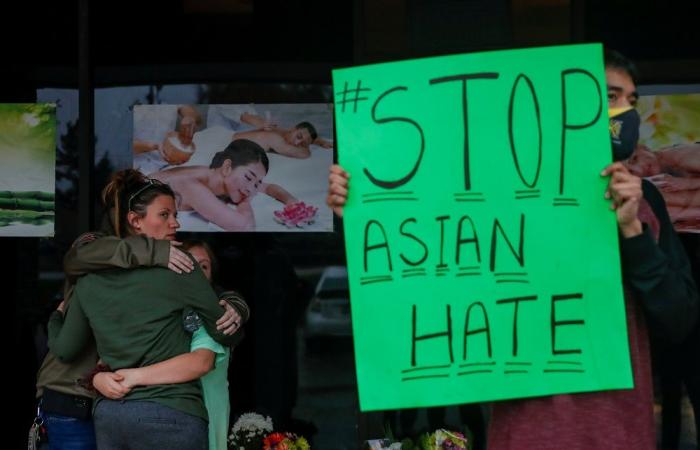 Hello and welcome to the details of For Asian-Americans, Atlanta shooting sows fresh fear after a year of mounting discrimination and now with the details

These days, Cho said, attitudes toward Asian-Americans like him have become far more hostile.

“It's gotten worse,” the 50-year-old handyman said as he shopped at an Asian grocery store in an Atlanta suburb yesterday. “The other day I was in a parking lot and some kid shouted for me to go back to China. I'm from Korea.”

Across the United States, many Asian-Americans reeled at the news of a shooting spree at three spas in and around Atlanta on Tuesday night that left eight people dead, including six Asian women. Authorities said the 21-year-old white male suspect told them he had a sex addiction and that the attacks may not have had a racial motivation.

But after a year in which reports of hate crimes against Asian Americans have skyrocketed, the shooting sparked fresh outrage, fear and demands for a government response.

“We're besieged,” said Russell Jeung, a professor of Asian American Studies at San Francisco State University and a founder of Stop AAPI Hate, a coalition that has tracked anti-Asian violence during the pandemic. “The overall community is traumatised.”

In a report released on Tuesday before the shooting, the coalition said it received 3,795 reports of hate incidents between March 2020 and February 2021. The majority of the discrimination consisted of verbal harassment and shunning, with women reporting incidents about two times more often then men.

A study published earlier this month by the Center for the Study of Hate and Extremism, a nonpartisan research centre, showed that reported hate crimes against Asian Americans in 16 major US cities rose by 149 per cent from 2019 to 2020, while overall hate crimes dropped 7 per cent in the same time period.

Advocates for the community say the surge is largely the result of Asian Americans being blamed for the coronavirus, which was first identified in Wuhan, China in late 2019. Former US President Donald Trump repeatedly referred to Covid-19 as the “China Virus” and “kung flu,” rhetoric seen by some as inflaming anti-Asian sentiment.

A Reuters/Ipsos poll of 4,430 Americans, conducted from February 18-24, showed that 37 per cent believed that Covid-19 was created in a lab in China, including 24 per cent of Democrats and 54 per cent of Republicans. Researchers are still trying to identify the origins of the virus, but there is no credible evidence to suggest it was accidentally released from a Chinese lab.

Lily Huynh, 24, said she was upset by the deaths of the women in Georgia.

She said she has increasingly worried that her mother, an immigrant from Vietnam who owns a nail salon in Mesquite, Texas, might be targeted due to her heavy accent and nationality.

“You think about these women, and you recognise your own mother could have been them,” Huynh said.

Asian-American leaders yesterday called for government officials to do more to protect and support their communities, and the hashtag #StopAsianHate circulated widely on social media. A US House of Representatives committee planned a hearing for Ttoday to address the issue.

“Asian Americans are afraid to leave their homes, and not just because of disease. They're afraid to leave their homes because there's a real risk, just walking down the street minding your own business, that you'll be blamed for a global pandemic and that people will come after you,” said Frank Wu, the president of Queens College, City University of New York, who studies anti-Asian discrimination in the United States.

Almost half of the anti-Asian hate incidents recorded by Stop AAPI Hate occurred in California, where Asian Americans make up some 15 per cent of the population.

Ronald Lisam, a 45-year-old Chinese-American who was grocery shopping in San Francisco's Chinatown yesterday, said he has started to question his safety in public.

“Every day I'm worried about being attacked, robbed, assaulted,” he said. ― Reuters

These were the details of the news For Asian-Americans, Atlanta shooting sows fresh fear after a year of mounting discrimination for this day. We hope that we have succeeded by giving you the full details and information. To follow all our news, you can subscribe to the alerts system or to one of our different systems to provide you with all that is new.