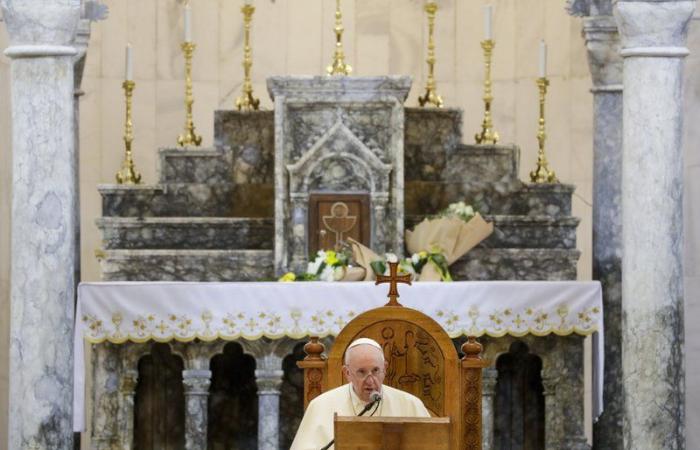 Back in 2014, her son’s death alerted the town’s Christian community to the impending IS onslaught. A mortar shell fired by the militants as they approached Qaraqosh struck outside Abdallah’s house, killing her son and two cousins playing in the front yard.

The pope heard Abdallah’s testimony at a church ceremony in Qaraqosh last Sunday.

But just days after the pontiff’s visit — meant to give hope to Iraq’s dwindling Christian community and encourage its members to stay — Abdallah doubts the realities of life in Iraq will change.

She said she would also leave if given a chance.

“The pope doesn’t have Moses’ staff, he can’t part the seas and solve our very difficult problems,” she told The Associated Press over the phone on Thursday. “If I had the resources or if someone gave me the chance to leave this country, I would never come back.”

Years after Iraqi forces declared victory over IS and drove militants from the area, Abdallah’s disabled daughter still cannot attend proper schools, homes are still shattered and in ruins. Jobs are hard to come by, and none of Abdallah’s relatives abroad plan to return.

Iraq’s Christian population, which has existed since the time of Christ, has dwindled from around 1.5 million before the 2003 U.S.-led invasion to just a few hundred thousand today. Estimates put the current population between 250,000-500,000.

As churches and Christian communities were increasingly targeted by extremist groups at the height of Iraq’s sectarian war that followed the invasion, the country saw an exodus of Christians. Even more fled after the brutal 2014 IS onslaught that emptied out entire Christian villages across the northern plains of Ninevah.

Francis’s four-day visit to Iraq ,including Qaraqosh, aimed to encourage Christians to stay, rebuild and restore what he called Iraq’s “intricately designed carpet” of faiths and ethnic groups.

Qaraqosh, a majority Christian town in Ninevah, is just one of many that was attacked by IS seven years ago. The militants overran the town, damaged its church and scrawled the proclamation “Islamic State will remain” on town walls.

The few Christians who returned after the liberation of Qaraqosh in 2016 found bullet-riddled mannequins and other signs that the militants had used the church premises as a firing range for target practice.

Many homes were leveled in the battles to oust the group and basic services have yet to be restored. Most of the town’s Christians remain scattered elsewhere in Iraq or abroad.

Abdallah remembers vividly that August 2014, when IS militants rampaged through Christian communities across Ninevah. She remembers her son and his two cousins.

“Their souls saved the whole city,” she recounted to the pontiff on Sunday.

On the plane back to Rome, the pope singled her testimony and told reporters it had “touched me most.”

“She said one word: forgiveness. I was moved,” Francis said.

At every turn of his historic trip as he crisscrossed Iraq, Francis urged Iraqis to embrace diversity — from Najaf in the south, where he held a historic face-to-face meeting with powerful Shiite cleric Grand Ayatollah Ali al-Sistani, to Nineveh to the north, where he met with Christian victims like Abdallah.

But after the pontiff’s departure, Abdallah said, reality has set in.

“Our situation is difficult because there is no internal agreement within the government,” she said. “How could anyone come back? There are no basic services.”

Bahnam Yussef, another resident of Qaraqosh, echoed her concerns. “The pope’s visit drew the world’s attention to Iraq,” he said, but Christians need more assurances before returning.

“They must get help, some of them have houses destroyed and burned, all this loss has to be compensated,” he added.

Marking the pope’s visit, Prime Minister Mustafa al-Kadhimi declared March 6 a national day for tolerance and co-existence. But such gestures have not been accompanied by practical steps. So far, Iraq has not passed any legislation or enacted policies to entice Christians to return.

Abdallah said her wish is to live in an Iraq where Christians and other minorities are afforded equal rights — not today’s Iraq where the sectarian power-sharing system often marginalizes minorities.

“It was incredible to see the pope, I never dreamed I would be so close to him” she said. “But it hasn’t changed anything.”

Image: FILE – Pope Francis delivers his speech during a meeting with the Qaraqosh community at the Church of the Immaculate Conception, in Qaraqosh, Iraq, Sunday, March 7, 2021. The story of Doha Sabah Abdallah, who’s son’s death alerted an entire Christian village in Iraq’s north of the impending militant onslaught, resonated deeply with Pope Francis during a recent historic papal visit. But days after the pontiff’s departure from Iraq, after a whirlwind four-day country-wide trip to give hope and encourage the country’s diminishing ancient Christian community to remain and return, even Abdallah said given the chance she would immigrate elsewhere. (AP Photo/Andrew Medichini, File)

These were the details of the news Iraqi woman who met the pope sees little chance for change for this day. We hope that we have succeeded by giving you the full details and information. To follow all our news, you can subscribe to the alerts system or to one of our different systems to provide you with all that is new.