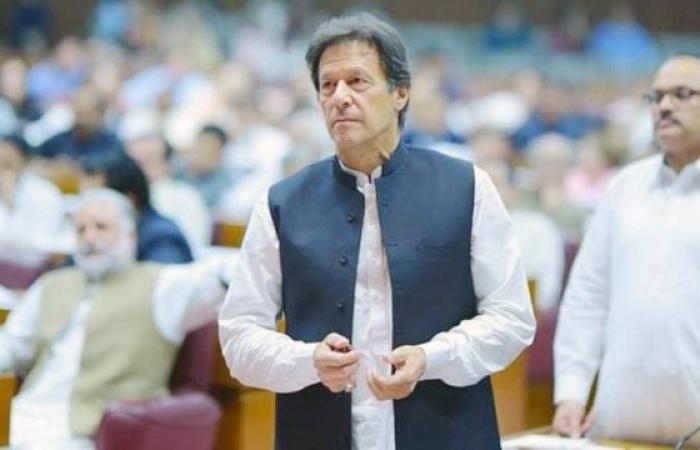 Hind Al Soulia - Riyadh - ISLAMABAD — Pakistani Prime Minister Imran Khan secured a vote of confidence by a narrow margin during a special session of the National Assembly on Saturday, gaining 178 votes out of the 342 lawmakers, six more than the minimum required to save his position.

Imran Khan took a confidence vote on Saturday to know if the country's deputies trust him or not.

The need for a vote of confidence emerged after the government candidate — incumbent Finance Minister Abdul Hafeez Sheikh — for the Senate seat from Islamabad lost in the election on Wednesday.

Since the National Assembly is the same electoral college for prime minister, Khan had to secure a vote of confidence to ensure the continuity of his government.

"One hundred and seventy-eight members regarded their votes in favor of the resolution which has been passed now," Speaker Asad Qaisar said. "Consequently Imran Khan has obtained the vote of confidence from the members of the National Assembly."

Qaisar also said that PM Khan had received 176 votes when he was elected prime minister after the 2018 general election.

In his post-vote victory speech in the National Assembly, Khan criticized the opposition and boasted about his government's economic performance.

The opposition parties are trying their best to pressurize me because they know that I will not give them any concessions, Khan remarked while speaking on the floor of the assembly.

“They have been stealing the country’s money for the last 30 years,” he said. “They have one-point agenda: blackmail him [Imran Khan] and take concessions.”

"We are on the way to economic recovery. The current account is improving constantly and now even the rupee is strengthening against the dollar without government intervention," he said.

The most corrupt man in Pakistan won against Abdul Hafeez Shaikh. “Just look at how his assets have increased over time,” he said. “What does this show?”

We have lost our moral standards and need to improve them now. "It hurts me when I go to Western countries and look at their moral standing. You will be embarrassed if you find out how common corruption is in Pakistan, he said.

As a country, we need to move towards ensuring that people are punished for their crimes. “I have no control over the courts or NAB. I request these institutions to convict people and punish them.”

The Pakistan Democratic Movement (PDM), an alliance of 11 opposition parties, did not attend Saturday's session.

"After the boycott of PDM [vote of confidence] session will have no political importance and the PTI government will not be considered the representative government of this nation," PDM President Maulana Fazlur Rehman told media a day before the vote.

The opposition parties have, however, announced that they will boycott the National Assembly's session.

"We will not let Imran Khan continue his corrupt practices," said PML-N's Ahsan Iqbal while speaking to the media at D-Chowk. We will send these PTI supporters back home, he said.

Experts believe the political instability that started after the Wednesday Senate elections will continue even after the vote of confidence.

Shahzada Zulfiqar, a senior political commentator based in Quetta, told Nikkei Asia that the government has been losing political weight for the last few weeks. "This political crisis will eventually lead to fresh general elections well before the planned date of elections in 2023," he said.

The trust vote is seen not as a crucial test of Khan’s hold, for the real battle between government and opposition will be in the election of Chairman Senate because both sides almost have equal votes," he said.

Elections for Chairman Senate are scheduled for March 12. The opposition has 53 members and the government 47 members in Senate. — Agencies

These were the details of the news Pakistan Premier Imran Khan wins confidence vote in National Assembly for this day. We hope that we have succeeded by giving you the full details and information. To follow all our news, you can subscribe to the alerts system or to one of our different systems to provide you with all that is new.