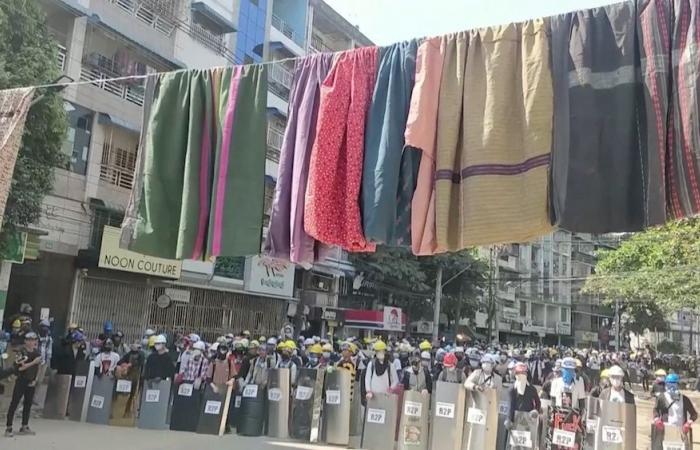 YANGON, March 6 — Protesters in Myanmar have taken to stringing up women’s clothing on lines across the streets to slow down police and soldiers because walking beneath them is traditionally considered bad luck for men.

The wraparound cloths, known as longyi, are hung on washing lines. Sometimes women’s underwear is used too.

“The reason why we hang the longyis across the streets is that we have the traditional belief that if we pass underneath a longyi, we might lose our luck,” said one 20-year-old protester who declined to give his name for fear of reprisals.

“The younger generation nowadays doesn’t believe it anymore, but the soldiers still do, and it’s their weakness. So, we might gain more time to run if they come towards us in case of emergency.”

Videos on social media have shown police taking down the lines of clothes before crossing them. Traditionally walking beneath items used to cover women’s private parts is not only bad luck, but emasculating for men.

For more than one month, protesters have demonstrated across Myanmar against the Feb. 1 military coup and the arrest of elected leader Aung San Suu Kyi and hundreds of others. More than 50 protesters have been killed by security forces.

The lines of clothing do not stop police using teargas, rubber bullets and stun grenades. Some protesters have also been killed by live bullets. The army has said it has responded to the protests with restraint.

The army seized power alleging fraud in a November election won by Suu Kyi’s party. The electoral commission had dismissed its allegations. — Reuters

These were the details of the news Myanmar protesters string up women’s clothes for protection for this day. We hope that we have succeeded by giving you the full details and information. To follow all our news, you can subscribe to the alerts system or to one of our different systems to provide you with all that is new.