‘I will shoot whoever I see’: Myanmar soldiers use TikTok to threaten protesters 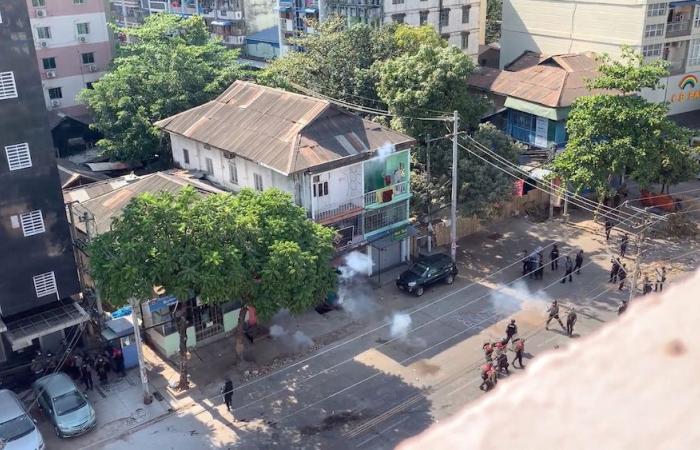 Hello and welcome to the details of ‘I will shoot whoever I see’: Myanmar soldiers use TikTok to threaten protesters and now with the details

Digital rights group Myanmar ICT for Development (MIDO) said it had found more than 800 pro-military videos that menaced protesters at a time of increasing bloodshed — with 38 protesters killed on Wednesday alone according to the United Nations.

“It’s just the tip of the iceberg,” said MIDO executive director Htaike Htaike Aung, who said there were “hundreds” of videos of threatening uniformed soldiers and police on the app.

A spokesman for the army and junta did not respond to a request for comment.

One video from late February reviewed by Reuters shows a man in army fatigues aiming an assault rifle at the camera and addressing protesters: “I will shoot in your fucking faces... and I’m using real bullets.”

“I am going to patrol the whole city tonight and I will shoot whoever I see... If you want to become a martyr, I will fulfil your wish.”

Reuters was unable to contact him or the other uniformed men who appear in the TikTok videos or to verify that they are in the armed forces.

TikTok is the latest social media platform to suffer a proliferation of menacing content, hate speech, and misinformation in Myanmar.

US tech giant Facebook has now banned all pages linked to Myanmar’s army — and has itself been banned.

TikTok’s policies forbid displays of guns unless they are in “safe environments”. According to a Linkedin job posting from yesterday, the platform is currently recruiting for a Myanmar product policy manager.

Reuters reviewed over a dozen videos where uniformed men, sometimes brandishing guns, threatened to harm protesters who are calling for the reversal of the coup and the release of elected leader Aung San Suu Kyi.

Some videos had tens of thousands of views. Those reviewed by Reuters were taken down this week. Some used hashtags relating to US celebrities.

Already growing fast in Myanmar, TikTok saw a strong rise in downloads after the military banned Facebook last month. It is in the top 20 most downloaded apps in Myanmar, according to industry data. It also became popular with young activists, with the protest hashtag #SaveMyanmar reaching 805 million views. Activists say they recently saw a rash of pro-military videos on TikTok accusing “third parties” of being responsible for the death of protesters killed during demonstrations.

Reuters reviewed several videos but could not establish their provenance.

Facebook, which remains popular in Myanmar despite the ban, has toughened its scrutiny of content since being accused of helping to fan atrocities against the Rohingya Muslim minority in 2017.

Researchers like Htaike say they believe the military is now attempting to grow its presence on other platforms. — Reuters

These were the details of the news ‘I will shoot whoever I see’: Myanmar soldiers use TikTok to threaten protesters for this day. We hope that we have succeeded by giving you the full details and information. To follow all our news, you can subscribe to the alerts system or to one of our different systems to provide you with all that is new.