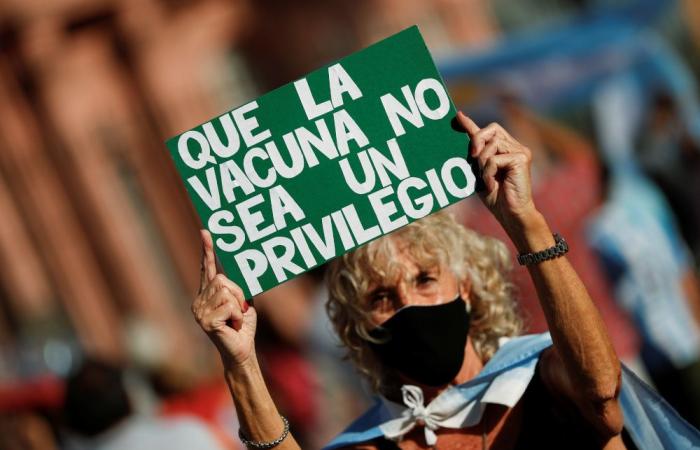 BUENOS AIRES, Feb 28 — Thousands of people demonstrated in cities across Argentina yesterday to protest the “VIP vaccinations” scandal that forced the health minister to resign.

Gines Gonzalez Garcia quit a week ago at the president’s request after it emerged that his friends had been able to skip the line for coronavirus inoculation.

Protesters carrying signs reading “Give me my vaccine” and “Stop wasting our money” gathered outside the government headquarters in Plaza de Mayo in Buenos Aires.

“They started by vaccinating friends of the government. It is not appropriate. They are stealing someone else’s life,” protester Irene Marcet told AFP.

Since Argentina began vaccinating its people, only healthcare workers had received the jab until Wednesday, when over-70s in Buenos Aires province were also invited to be immunized.

On Monday, the government released a list of 70 people who received the vaccine outside of the official campaign, which included the 38-year-old economy minister and former president Eduardo Duhalde, his wife and their children.

On the railings in front of the Casa Rosada, the seat of the government and the president’s office, protesters hung mock black body bags with the names of pro-government leaders vaccinated.

“The way to demonstrate in a democracy cannot be to display mortuary bags with names of political leaders in front of the Casa Rosada,” he tweeted.

“This regrettable action only shows how many opponents see the Republic. Let us not be silent before such an act of barbarism.”

The demonstrations took place without incident apart from some friction between protesters and union activists in front of the president’s official residence.

Protesters also rallied in other cities including Cordoba, Rosario and and Mar del Plata.

With a population of 44 million, Argentina has registered more than two million infections and about 52,000 deaths from coronavirus.

One million people have already been inoculated, according to the government.

Argentina has received 1.22 million doses of the Russian Sputnik V vaccine, around 580,000 doses from Covishield, from India’s Serum Institute, and 904,000 shots from China’s Sinopharm. — AFP

These were the details of the news Thousands protest over Argentina ‘VIP vaccinations’ scandal for this day. We hope that we have succeeded by giving you the full details and information. To follow all our news, you can subscribe to the alerts system or to one of our different systems to provide you with all that is new.

PREV Drone attack on Iraqi base hosting US troops; no casualties
NEXT India's lauds Gulf assistance in fighting COVID-19