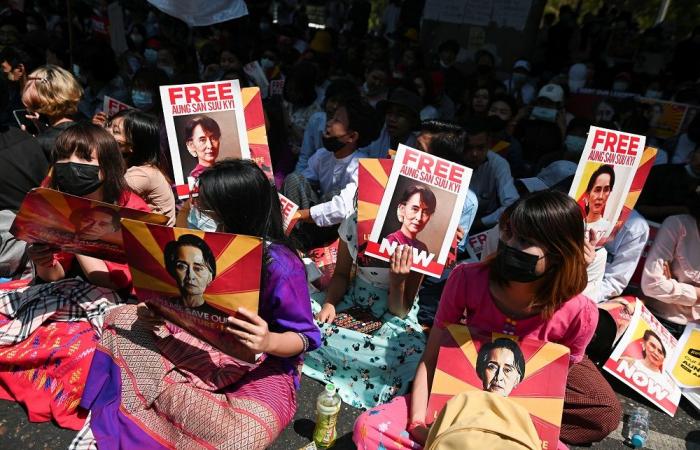 YANGON, Feb 26 ― Myanmar police launched a crackdown overnight in a Yangon district after breaking up a protest to oppose a military appointed local official, as the World Bank halted payments to projects in the country that were made after the February 1 coup.

The Southeast Asian country has been in crisis since the army seized power and detained the civilian government leader Aung San Suu Kyi and much of her party leadership after the military complained of fraud in a November election.

There have been daily protests and strikes by pro-democracy supporters for about three weeks, often drawing hundreds of thousands of people across the diverse nation stretching from the country.

Violence broke out on the streets of the commercial hub of Yangon on Thursday after some in a crowd of about 1,000 military loyalists attacked pro-democracy supporters and media.

Several people were beaten by groups of men, some armed with knives, others firing catapults and hurling stones, witnesses said. At least two people were stabbed, video footage showed.

In a separate incident, riot police fired tear gas into the Tamwe neighbourhood of Yangon to disperse a crowd protesting the replacement of a local official by the military, according to a witness and live-streamed video.

Residents later said they heard repeated shots and that police had remained in some parts of the district until around 2am today.

“We were really scared,” said one of the residents, who asked not be named.

Suu Kyi supporters posted on social media that they intended to hold another protest in Tamwe this morning.

The World Bank has halted payments to projects in Myanmar on withdrawal requests that were made after the coup, the bank said in a letter to Myanmar's finance ministry seen by Reuters.

World Bank President David Malpass said last week it was taking an “extra cautious” approach to Myanmar but was continuing to execute past projects, including emergency coronavirus relief.

Last year, the World Bank approved over US$350 million (RM1.41 billion) in new loans and grants to aid Myanmar's pandemic efforts and to support farmers and rural employment.

The United States, Britain and others have called for Suu Kyi's release and the restoration of democracy, and have imposed limited sanctions aimed at members of the junta and its business links.

“Today's package of measures sends a clear message to the military regime in Myanmar that those responsible for human rights violations will be held to account,” Foreign Secretary Dominic Raab said.

The army said its overthrow of the government was within the constitution after its complaints of fraud in the November 8 election, swept by Suu Kyi's party, had been ignored. The election commission said the vote was fair.

The army has promised a new election after reviewing voter lists. It has not given a date but it imposed a one-year state of emergency when it seized power.

Suu Kyi has been detained incommunicado at her home in the capital Naypyitaw but her party says its November victory must be respected.

The question of a new election is at the centre of a diplomatic effort by the Association of Southeast Asian Nations (Asean), of which Myanmar is a member, aimed at easing the crisis.

Indonesia has taken the lead in the attempt and its foreign minister, Retno Marsudi, met her military-appointed Myanmar counterpart, Wunna Maung Lwin, for talks in Thailand this week.

But Indonesia's intervention has raised suspicion among coup opponents who fear it will confer legitimacy on the junta and its bid to scrap the November vote and arrange a re-run.

Retno did not mention an election in comments to reporters after her talks but emphasised “an inclusive democratic transition process”. ― Reuters

These were the details of the news Myanmar police raid protest district as World Bank halts some payments for this day. We hope that we have succeeded by giving you the full details and information. To follow all our news, you can subscribe to the alerts system or to one of our different systems to provide you with all that is new.