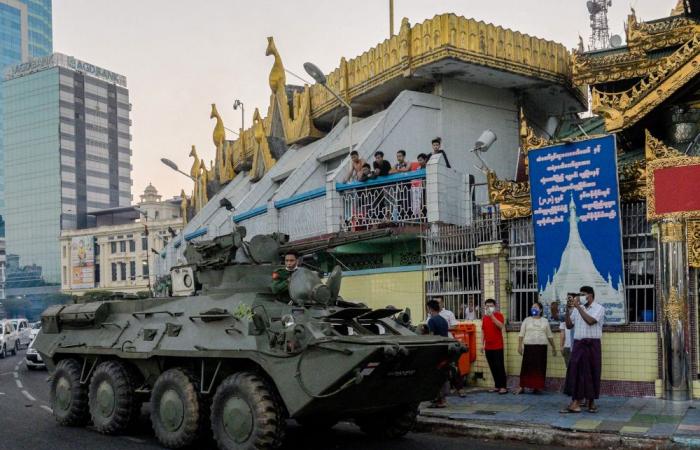 Hello and welcome to the details of Myanmar junta’s top diplomat in talks with Thailand, Indonesia and now with the details

The talks came as an anti-coup protester died in detention, a local rescue organisation said. Four others have been killed in the crackdown.

Foreign minister Wunna Maung Lwin held talks with his counterparts from Thailand and Indonesia in what was the first known face-to-face meetings between a senior junta member and foreign government officials.

The military has weathered a storm of international condemnation for ousting civilian leader Aung San Suu Kyi from power in a February 1 putsch, while dissent within its borders has been vociferous with daily nationwide protests.

Indonesian Foreign Minister Retno Marsudi said she expressed concerns about the safety and welfare of Myanmar citizens and reiterated a need for an “inclusive democratic transition process”.

“We ask all parties to exercise restraint and not use violence to avoid casualties and bloodshed,” she told reporters in Jakarta.

Marsudi has been on a “shuttle diplomacy” mission over the past two weeks discussing the Myanmar crisis during visits to Brunei and Singapore as well as phone calls with other Southeast Asian counterparts.

She had hoped to travel to Naypyidaw after her visit to Bangkok to directly convey messages from Indonesia and other countries but confirmed the visit had to be postponed.

‘Stop negotiating with them’

“The Military’s State Administration Council is not our legitimate government,” said participant Seinn Lae Maung, who had a Myanmar flag painted on her face.

“Please respect our votes and do hear our voices.”

Marsudi later hit back at the criticism, warning: “To do nothing is not an option.”

Since the February 1 coup, Myanmar has seen a torrent of anger and defiance from hundreds of thousands of protesters nationwide demanding the release of Suu Kyi.

The military has justified its actions by alleging widespread electoral fraud in November’s elections, which Suu Kyi’s party had won in a landslide.

Since taking power, the junta has ordered nightly internet blackouts and arrested hundreds of anti-coup protesters, while security forces have steadily stepped up enforcement tactics to quell demonstrations.

They have deployed tear gas, water cannon and rubber bullets against protesters, as well as isolated incidents of live rounds.

The post-coup death toll rose on Wednesday as a 20-year-old man who was arrested and sustained a leg injury at a protest last weekend in Mandalay, Myanmar’s second largest city, died.

“(His mother) ran to me, crying and hugging me, saying her son had died,” said Khin Maung Tint from Mandalay Rescue.

That followed the deaths of three other protesters, including 17-year-old Wai Yan Tun, who was shot in the head Saturday after security forces opened fire during a Mandalay protest.

One man in Yangon was also shot dead while patrolling his neighbourhood against night arrests.

On Wednesday families and friends paid tribute to 30-year-old Tin Htut Hein who had been patrolling Yangon’s Shwephyitha Township when he was gunned down.

Some mourners wore T-shirts with his face printed on the front, while others placed roses on a sign that said “dictatorship must fail”.

Protests continued across the country Wednesday, from Yangon — where ethnic minority groups dressed in traditional outfits and waved flags — to Mandalay, where protesters rode elephants who had “Down with Military Dictatorship” scrawled across their bodies.

Suu Kyi has not been seen in public since she was detained in dawn raids.

The Nobel laureate is facing obscure charges for having unregistered walkie-talkies in her residence and for breaking coronavirus rules. She is expected to go on trial March 1. — AFP

These were the details of the news Myanmar junta’s top diplomat in talks with Thailand, Indonesia for this day. We hope that we have succeeded by giving you the full details and information. To follow all our news, you can subscribe to the alerts system or to one of our different systems to provide you with all that is new.