N. Korean defector undetected for hours after swimming to South 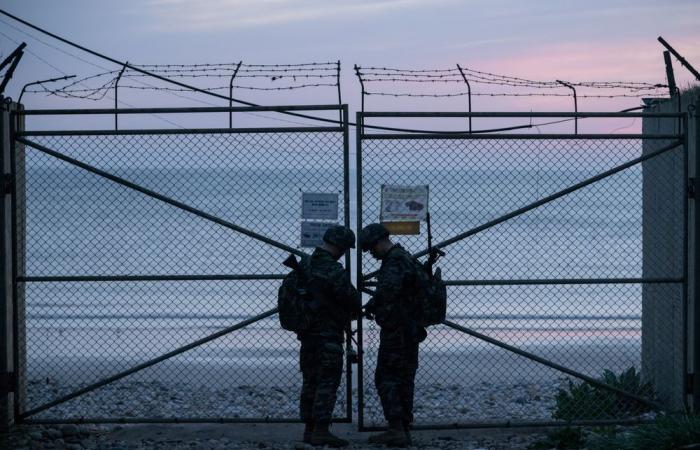 Hello and welcome to the details of N. Korean defector undetected for hours after swimming to South and now with the details

SEOUL, Feb 24 — A North Korean defector wore a diving suit and fins during a daring six-hour swim around one of the world’s most fortified borders, a Seoul official said, and was caught only after apparently falling asleep.

Bungling South Korean forces did not spot the man’s audacious exploit despite him appearing several times on CCTV after he landed and triggering alarms, drawing heavy criticism from media and opposition MPs.

Even after his presence was noticed, the man — who used diving gear to make his way by sea around the Demilitarized Zone that divides the peninsula — was not caught for another three hours.

The man, reportedly in his 20s, landed north of the town of Goseong on the east coast.

“He presumably had swum for about six hours, wearing a padded jacket inside a diving suit and fins. His clothing appeared to have kept him warm and allowed him to stay afloat,” an unnamed Joint Chiefs of Staff official was quoted as saying by Yonhap news agency yesterday.

Tidal currents worked in his favour, the official said, and he abandoned most of his equipment before making his way through a drainage channel under the barbed-wire fences that run along the coast.

Eventually a manhunt was launched, and troops found him three hours later, apparently asleep, his facemask hanging in a tree.

Officials say the defector, presumed to have been a civilian in the North, has expressed a desire to defect.

The military acknowledged troops had “failed to abide by due procedures” and vowed to strengthen border security.

And in a parliamentary hearing yesterday, Defence Minister Suh Wook acknowledged that surveillance systems in the area were “malfunctioning and outdated”.

Only a handful of Northern defectors ever directly cross the DMZ or swim past the maritime border — although the last such publicly known incident was in November, when questions about security were also raised.

The vast majority of defectors instead first travel to neighbouring China, sometimes staying there for years before making their way on to the South via third countries.

More than 30,000 North Koreans have fled to the South over the decades but numbers plummeted to just 229 last year, after Pyongyang imposed a strict border closure to protect itself from the coronavirus that first emerged in neighbour and key ally China.

The incident was evidence the South Korean military was “close to a near collapse”, the conservative Chosun Ilbo newspaper today.

“Is this unit the only unit not doing its job properly? We think not,” it added in an editorial. — AFP

These were the details of the news N. Korean defector undetected for hours after swimming to South for this day. We hope that we have succeeded by giving you the full details and information. To follow all our news, you can subscribe to the alerts system or to one of our different systems to provide you with all that is new.

PREV EXPLAINER: What’s behind the clashes in Jerusalem?
NEXT India's lauds Gulf assistance in fighting COVID-19