The national police said on Twitter the death toll stood at “more than 50” prisoners after unrest at facilities in the provinces of Guayas, Azuay and Cotopaxi.

The authorities, he said, “are acting to retake control.”

The police did not state whether order had been restored after violence broke out at jails in the port city of Guayaquil in the southwest, and at Cuenca and Latacunga in the Andes.

Thirty-eight of the deaths occurred at the maximum facility section of the Cuenca prison, according to the prosecutor’s office.

Police commander Patricio Carrillo reported unrest at several prisons in the South American nation, and said “the situation is critical.”

Several were hurt in the violence, including two inmates at Guayaquil who sustained serious injuries.

Interior Minister Patricio Pazmino, meanwhile, tweeted that a centralised command post has been set up to respond to what he said was “concerted action by criminal organisations to generate violence in penitentiary centres.”

A 90-day state of emergency in the country’s jails was ordered by Moreno last year to try and bring gang activity under control and reduce the violence.

Inmate disputes left 51 dead in 2020, according to police.

In order to reduce prisoner numbers amid the coronavirus epidemic, the government commuted the sentences of people convicted of minor offences, reducing overcrowding from 42 per cent to 30 per cent. — AFP

These were the details of the news At least 50 inmates die in Ecuador prison riots for this day. We hope that we have succeeded by giving you the full details and information. To follow all our news, you can subscribe to the alerts system or to one of our different systems to provide you with all that is new. 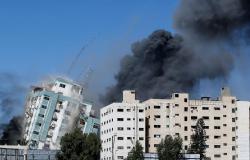