India joins US, others in raising pressure on Myanmar generals 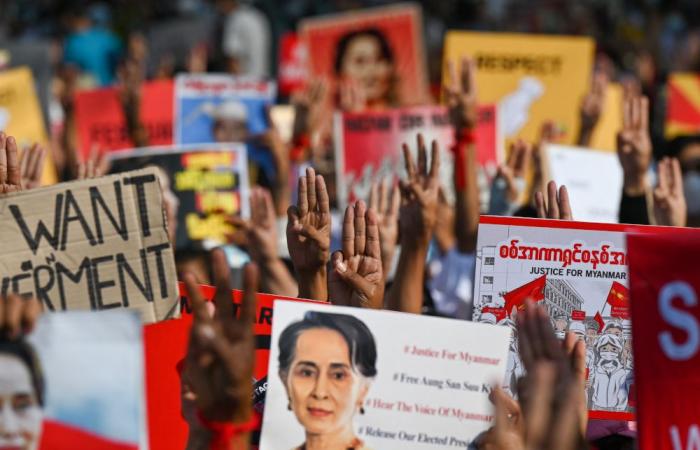 Hello and welcome to the details of India joins US, others in raising pressure on Myanmar generals and now with the details

YANGON, Feb 19 — Myanmar’s generals came under increased diplomatic pressure yesterday over the coup that deposed Aung San Suu Kyi, as India joined the United States and other countries in calling for a restoration of democracy, and Britain and Canada announced sanctions against the junta.

As the ruling generals pressed on with a drive to stymie nationwide opposition, Myanmar’s giant neighbour India called in a joint statement along with the United States, Japan and Australia — all members of the so-called “Quad” alliance — for strengthening democracy in Asia and reversing the coup.

India said that External Affairs Minister Subrahmanyam Jaishankar emphasised “upholding of rule of law and the democratic transition” in Myanmar.

The February 1 putsch — which saw Suu Kyi and President Win Myint detained in dawn raids under the blanket of an internet blackout — has drawn international condemnation.

Washington was the first to enact concrete action, announcing targeted sanctions last week against Myanmar’s generals by cutting off their access to US$1 billion (RM4.04 billion) in funds in the United States.

Canada in turn sanctioned nine Myanmar military officials and accused the junta of engaging “in a systemic campaign of repression through coercive legislative measures and use of force”.

Army chief General Min Aung Hlaing — who now holds legislative, executive and judicial powers — is already sanctioned by Britain, Canada and the United States for his military’s role in a brutal crackdown on the Rohingya Muslims in 2017.

Hackers against the coup

A torrent of anger and defiance has surged in Myanmar among young and old — many of whom remember the brutal 49 years under military rule before the generals loosened their grip on power in 2011.

But after a decade-long flirtation with democracy, the military has justified seizing power by alleging widespread voter fraud in November elections, which Suu Kyi’s party won in a landslide.

The regime has since imposed multiple internet shutdowns and blocked social media platforms in an attempt to stifle dissent.

“We are fighting for justice in Myanmar,” the hacker group said on its Facebook page.

The impact of the hacks “will be potentially limited but what they are doing is raising awareness,” cybersecurity expert Matt Warren from Australia’s RMIT University told AFP.

Meanwhile NetBlocks, a Britain-based group that monitors internet outages around the world, said that the internet “has been cut in #Myanmar for a fifth consecutive night.”

Network data “show national connectivity down to 13 per cent of ordinary levels from 1am [Friday] local time,” NetBlocks tweeted.

If it follows the pattern of the previous four days, it will be restored by 9am (0230 GMT).

For nearly two weeks hundreds of thousands of demonstrators have marched nationwide demanding Suu Kyi’s release and a return to democracy.

Fears of an impending crackdown have heightened in recent days, as armoured vehicles were seen Sunday around commercial hub Yangon and an increased presence of troops across the country.

For the second day running motorists in Yangon blocked roads with vehicles they claimed were “broken” to stop security forces from moving around Myanmar’s biggest city.

Thousands crowded key junctions, flashing a three-finger salute at the police and urged them to join “the civil disobedience movement.”

Tension was high in the northern city of Myitkyina, where thousands marched under the watchful gaze of truckloads of soldiers, local media reported.

The massive show of force comes days after Myitkyina police fired tear gas and shot into a crowd of protesters late Sunday.

Soe Thu Aung told AFP that he spoke with his partner Khin Mar Aung, a ministry worker, until midnight Wednesday — then received a text message at 4:30am yesterday saying that police were coming to arrest her.

“We don’t know where they are now,” Soe Thu Aung told AFP.

Since the coup, more than 520 people have been arrested, according to the Assistance Association for Political Prisoners.

There have been isolated reports of live rounds used, with one woman in critical condition after being shot in the head last week in Naypyidaw.

The military said a police officer died in Mandalay after a confrontation with protesters on Sunday. — AFP

These were the details of the news India joins US, others in raising pressure on Myanmar generals for this day. We hope that we have succeeded by giving you the full details and information. To follow all our news, you can subscribe to the alerts system or to one of our different systems to provide you with all that is new.