Protesters out again in Myanmar, police use water cannon in capital 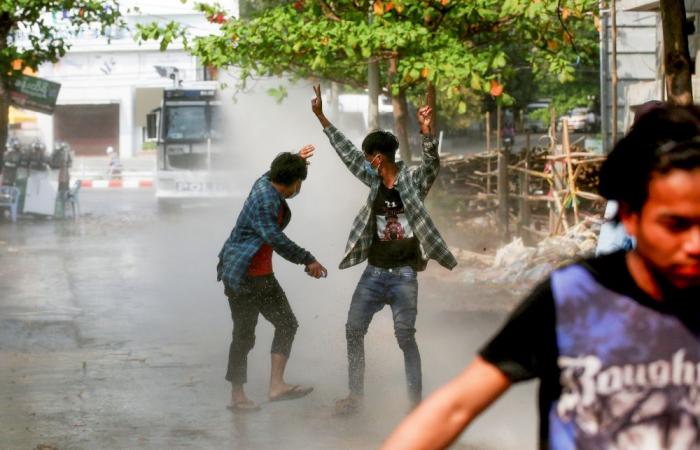 Hello and welcome to the details of Protesters out again in Myanmar, police use water cannon in capital and now with the details

NAYPYIDAW, Feb 18 — Protesters were out again across Myanmar today to denounce the February 1 coup and arrest of elected leader Aung San Suu Kyi, with police resorting to force to disperse crowds, using water cannon in the capital and catapults in a northern town.

The daily protests and strikes that have paralysed many government offices show no sign of easing despite a junta promise of a new election and appeals for civil servants to return to work and threats of action if they do not.

“I don’t want to wake up in a dictatorship. We don’t want to live the rest of our lives in fear,” said Ko Soe Min, who was out in the main city of Yangon where tens of thousands took to the streets a day after some of the biggest protests yet.

Big crowds returned to Yangon’s central Sule Pagoda while many young people also massed at another favourite protest site, at an intersection near the main university campus, spilling into the streets as police tried to move them on.

The marches have been more peaceful than the bloodily suppressed demonstrations seen during an earlier half century of army rule, but they and the civil disobedience movement have had a crippling effect on much official business.

Many motorists in Yangon drove at a snail’s pace in a show of opposition to the coup, a day after many pretended to be broken down to block police and army vehicles.

“I’ll be happy if government officers are late for work or can’t get there,” said Ko Soe Min, who joined the slow-car protest.

In the second-biggest city of Mandalay, protesters rallied to demand the release of two officials arrested in the coup and police fired water cannon in the capital, Naypyitaw, to scatter a crowd approaching police lines.

The northern town of Myitkyina was tense after police and soldiers used catapults to break up a protest, a resident said. Pictures on social media showed soldiers and rows of police trucks.

“They’re not acting in line with the constitution nor rule of law. They are acting like terrorists,” said activist Sut Seng Htoi. Police were not available for comment.

In the old capital of Bagan, people with banners and flags marched in colourful processions against a backdrop of ancient temples. Some protesters stopped at a temple to put a curse on dictators, a witness said.

Putting an end to the civil disobedience campaign appears to be the military government’s priority.

Late yesterday, the junta issued arrest warrants against six celebrities, including film directors, actors and a singer, under an anti-incitement law, for encouraging civil servants to join the protest.

The charges can carry a two-year prison sentence.

“It’s amazing to see the unity of our people. People’s power must return to the people,” actor Lu Min, who was on the junta’s ‘wanted list’, posted defiantly on his Facebook page.

An activist group that monitors social media said that since February 9, posts had shown some sort of protest in about 90 per cent of cities and towns across the country.

The military says a majority of people back its actions.

One charity worker was wounded in the leg by a rubber bullet.

Neither the army nor the police made any immediate comment on the incident, but the army’s Facebook page said forces were providing security across the country to “make sure people have tranquillity and sound sleep”.

The number of people known to have been detained since the coup had reached 495 by yesterday, of whom 460 were still being held, Myanmar’s Assistance Association for Political Prisoners said in a statement.

The army says that one policeman died of injuries sustained in a protest. One protester who was shot in the head during a protest in the capital Naypyitaw is being kept on life support, but doctors say she is not expected to survive.

Halting Myanmar’s tentative transition towards democracy, the army took power after the electoral commission rejected its accusations of fraud in a November 8 election won by Suu Kyi’s National League for Democracy (NLD), prompting anger from Western countries as well as the local protests.

Coup opponents are deeply sceptical of junta promises to hand over power after a new election for which no date has yet been set.

Nobel Peace laureate Suu Kyi, detained since the coup, now faces a charge of violating a Natural Disaster Management Law as well as charges of illegally importing six walkie talkie radios. Her next court appearance has been set for March 1.

These were the details of the news Protesters out again in Myanmar, police use water cannon in capital for this day. We hope that we have succeeded by giving you the full details and information. To follow all our news, you can subscribe to the alerts system or to one of our different systems to provide you with all that is new.