UAE: Supporters of Princess Latifa call on Joe Biden to push for her release 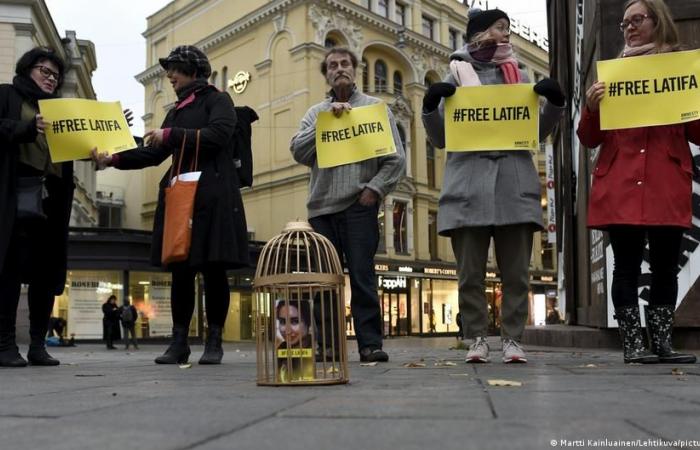 You are now following the details of the UAE: Supporters of Princess Latifa call on Joe Biden to push for her release news and now we leave you with the details

Mohamed Nass - Cairo - Prominent supporters of Princess Latifa called on President Joe Biden Wednesday to pressure the United Arab Emirates (UAE) for her release. Latifa, the 35-year-old daughter of UAE Prime Minister Sheikh Mohammed bin Rashid Al Maktoum, said she has been held hostage  by her father in a villa after she attempted to flee the country in 2018, according to recently released video footage.

Activists: Biden may be Latifa’s only hope

Human rights campaigner and Latifa ally David Haigh said Biden is one of the only figures that wields enough influence to secure her release. He said supporters of the princess were encouraged by Saudi Arabia’s recent move to release women’s rights activist Loujain al-Hathloul, after the Biden administration froze some arms sales to that Gulf nation.

“The only level of people that are going to have enough influence to effectively force Latifa’s father to open her jail are people like Joe Biden, and there’s very few of them,” Haigh told AP on Wednesday. “And he’s shown that he can do it with Saudi,” he added.

David Wearing, a teaching fellow and Middle East expert at SOAS University of London, told UK outlet Sky News on Wednesday that the Biden presidency could lead to a “better outcome” for the princess. He said the UAE may be “under pressure” to improve its relations with the United States.

The new president has already treated the UAE differently than his predecessor, ending US support for the Yemen offensive. Biden has also frozen a major Trump-era deal to sell F-35 fighter jets to the Emirates.

‘There is no accountability or justice’ in the UAE, former prisoner tells DW

Although the backers of the princess may believe Biden could be their best hope to secure her release, one former UAE prisoner said Al Maktoum feels he can avoid punishment for the harsh treatment of his daughter. Dr. Matthew Hedges of the School of Government and International Affairs at Durham University in the UK was held for six months in 2018 after he was accused of spying on the UAE and told DW that the Gulf nation will likely not be held accountable by western countries for its human rights abuses.

In regards to Princess Latifa’s treatment, Hedges said he felt Al Maktoum “feels as though he can get away with it. He feels as though no one’s pushing back against him — domestically, internationally.”

He added that “countries like my own, the UK, continue doing business with him. There is no form of accountability or justice.” He claimed the UK is unwilling to jeopardize its “deep ties” with the UAE over the princess, despite British Foreign Secretary Dominic Raab expressing concerns over her situation.

Hedges warned there will be more imprisonments and hostage-taking behavior in the UAE if no punitive action is taken. He said “unless there is any accountability in any justice, any form of sanctions or punishment, or some form of pushback against this type of behavior, all we’re doing is enabling it to occur.”

The United Nations has promised it would question the UAE over Latifa’s detention.

“We will certainly raise these new developments with the UAE,” Rupert Colville, spokesman for the Office of the United Nations High Commissioner for Human Rights (UNHCR) said Wednesday, adding other UN human rights agencies may get involved in the case.

Call for evidence of princess’s wellbeing

Rodney Dixon, a London-based attorney for Latifa, told the BBC he hopes a UN investigation will be decisive in granting her release.

The video of Latifa released this week showed her in the bathroom of her “villa jail” where she expressed concerns for her safety. “Every day I’m worried for my safety and my life, I don’t really know if I’m going to survive this situation,” she said.

Princess Haya bint Hussein, Al Maktoum’s former wife, has alleged he kidnapped two daughters from his previous marriage: Shamsa and Latifa. Al Maktoum and the Dubai High Court have argued Latifa is safe and being taken care of by her family.

These were the details of the news UAE: Supporters of Princess Latifa call on Joe Biden to push for her release for this day. We hope that we have succeeded by giving you the full details and information. To follow all our news, you can subscribe to the alerts system or to one of our different systems to provide you with all that is new.