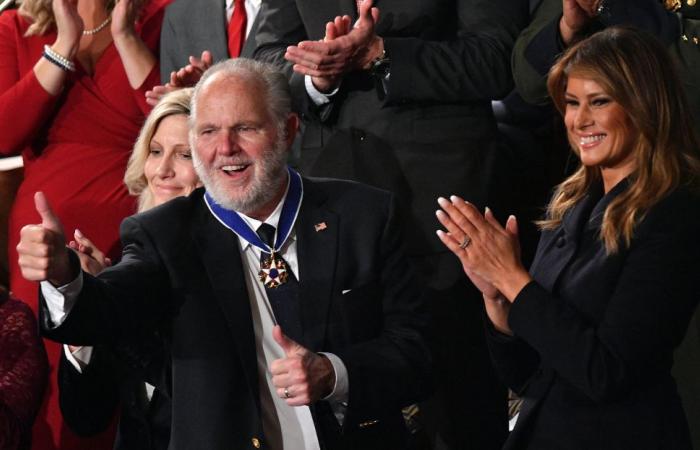 The controversial and influential broadcaster — seen as a kingmaker among Republican politicians — had announced in February 2020 he was fighting advanced lung cancer, but vowed to continue with “The Rush Limbaugh Show” as he underwent treatment.

“We, the Limbaugh family, are deeply saddened to announce that our beloved Rush has died,” read a family statement, signed by wife Kathryn Adams Limbaugh.

Limbaugh “will forever be the greatest of all time, a courageous, brilliant gentle giant and radio pioneer,” the statement added.

“He was a conversationalist, a brilliant guy,” Trump said. “Totally brilliant. He was unique.... he was a great man.”

Known as a provocateur or “shock” host with a passionate right-wing following, Limbaugh’s syndicated show has been aired since its 1988 launch.

He has been seen as a significant influencer of the conservative movement since the Ronald Reagan presidency, even as he was accused of promoting conspiracy theories and misinformation.

Limbaugh helped spread “birther” theories that president Barack Obama was born outside the United States, and contended that last year’s mosque shootings in New Zealand, which killed 51 Muslims, were staged by a leftist to attack conservatives.

In February last year, then-president Trump outraged liberals but delighted conservatives when he awarded Limbaugh with the much-coveted Medal of Freedom — the highest possible civilian award.

Born in 1951 in Missouri, Limbaugh’s radio career began in 1971 but he at first suffered several failures at various stations.

In 1984, he was hired by a station in Sacramento, California which was looking for a flamboyant host.

In less than a year, Limbaugh became the most listened-to personality in the city.

In vast swaths of rural America, religious shows and conservative talk radio — often broadcast on an AM frequency — frequently dominate the airwaves.

However, Limbaugh also attracted fierce criticism over his career from Americans outraged by his statements.

“He made our politics more toxic and contributed to the dangerous levels of polarization that dominate our public discourse today,” Media Matters watchdog group said in statement. — AFP

These were the details of the news US conservative radio host Rush Limbaugh dies aged 70 for this day. We hope that we have succeeded by giving you the full details and information. To follow all our news, you can subscribe to the alerts system or to one of our different systems to provide you with all that is new.

PREV Do not give into to evil and division, Pope tells Myanmar community
NEXT India's lauds Gulf assistance in fighting COVID-19