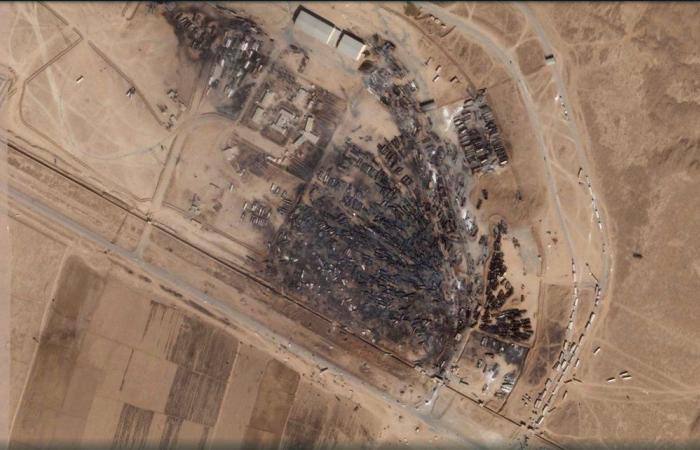 Mohamed Nass - Cairo - HERAT, Afghanistan (AP) — Investigators began sifting through the ruins of a massive fire that destroyed hundreds of fuel tankers parked at a major crossing at the Afghanistan-Iran border, the governor of Afghanistan’s Herat province said Tuesday.

Satellite photos of the Islam Qala customs terminal and surroundings analyzed by The Associated Press show the devastation wreaked by a blaze that began Saturday when a fuel tanker exploded. The flames roared out of control for nearly three days.

The cause of the explosion and ensuing fire were still undetermined Tuesday.

Satellite images from Planet Labs Inc. obtained by the AP show the burnt shells of hundreds of fuel and natural gas tankers on the Afghan side of the border. Typically, hundreds of tankers line up there while passing between the two countries.

At least 20 people were injured when the explosion set off a huge fire that engulfed many of the hundreds of trucks lined up at the border crossing. Officials say there were some 2,500 trucks there at the time of the fire. The customs holding area was made to accommodate no more than 700 tankers at a time but routinely hundreds more crowd into the area.

A strike by truckers protesting increased government taxes was in its second week at the time of the fire and was the reason for the extraordinary number of tankers parked at the crossing, said Younus Qazizada, Herat Chamber of Commerce president.

Herat firefighters with only limited capability said the fire was out of control almost from the initial moments.

The satellite images show a mass of burned trucks, the ground around them singed black. The fire burned through an area just under a half a square kilometer (a fifth of a square mile). More trucks had lined up after the fire and other cars and people appeared to be gathered at the site Tuesday.

The crossing, around 120 kilometers (75 miles) west of the city of Herat, the provincial capital, is a major transit route between Afghanistan and Iran.

The United States allows Afghanistan to import fuel and oil from Iran as part of a special concession that exempts Kabul from U.S. sanctions against Iran.

By JON GAMBRELL and HAMED SARFARAZI

A satellite photo from Planet Labs Inc. shows the aftermath of a massive fire at Islam Qala border crossing in Afghanistan’s Herat province on Tuesday, February 16, 2021. The satellite photos analyzed Tuesday by The Associated Press show the devastation after a series of explosions and fires consumed hundreds of fuel tankers on the Afghan-Iranian border on Saturday, Feb. 13, 2021. (Planet Labs Inc. via AP)

These were the details of the news Satellite images show fire devastation on Afghan-Iran border for this day. We hope that we have succeeded by giving you the full details and information. To follow all our news, you can subscribe to the alerts system or to one of our different systems to provide you with all that is new.