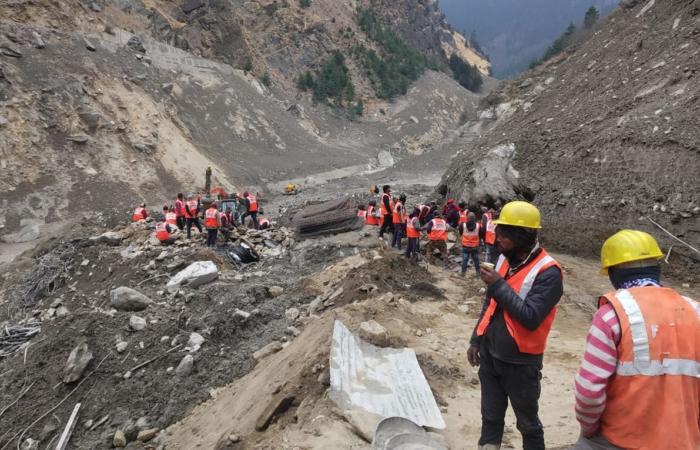 Jeddah - Yasmine El Tohamy - NEW DELHI: More than 30 people are believed dead and 200 missing three days after a burst glacier triggered a flood in the Indian Himalayan state of Uttarakhand.

The sudden surge of water and upstream debris in the Chamoli district on Sunday washed away a dam and left 35 workers trapped in a 2-kilometer tunnel.

Military and disaster relief officials have been working round-the-clock in a desperate rescue operation.

At least 32 people have been confirmed dead and about 200 are missing following the flood, Piyoosh Rautela, executive director of Uttarakhand’s Disaster Mitigation and Management Center, told Arab News on Wednesday.

Rautela said that thick layers of mud and debris are hampering operations to free the trapped workers “and the chances of people surviving are slim.”

Most of those killed or missing were working on the dam’s hydropower or in construction projects.

Ashok Rathore, a resident of Uttar Pradesh’s Lakhimpur district, told Arab News: “My younger brother, Sushil, had been working there as a mason since December. For two days we have been looking for some sign of his survival.”

Rathore added: “He has been buried under the debris, which is more than 40 meters deep. I think I will never get my brother’s dead body either.”

He is among several survivors in the area who are looking for their family members.

Maqbool Hussain, an Ichhanagar village resident, said that he had been searching for his 22-year-old son Islam. “I have lost all hope. I am returning home today. My son is buried in the debris,” he said.

According to survivors from his village, more than 200 people were working on the construction site when the disaster struck.

“In a matter of minutes, more than 200 people have been washed away,” Hussain said.

“About 15 families in my village have lost their dear and near ones,” he said.

The havoc caused by the instant flood has again drawn attention to Uttarakhand’s fragile environment.

Natural disasters, including flooding and landslides, claimed more than 5,000 lives there in 2013 alone.

Geologists say they have repeatedly warned the government against building large dams in the Himalayas.

Ravi Chopra, director of People’s Science Institute in Uttarakhand — a non-governmental body working to promote natural resource management, conservation biology and sustainable development — said he had urged the government not to consider dams in the region when he was part of an expert group in 2012.

“The government does not listen to our recommendation. I feel sad that so many lost their lives,” Chopra told Arab News.

“We warned the government that the inner Himalaya, where the valley floor is above 2,000 meters, is a periglacial zone, and when the flood comes it brings lots of boulders and muds. It will destroy anything in its path,” he added.

“Each time it breaks a barrier, it gathers more energy and moves downstream with greater force.”

He said that the government had ignored “a very clear warning.”

“The government, in the urge to develop and exploit the region economically, has set up big hydel projects, and is building highways in the fragile mountains and putting the lives of many people at risk,” Maikhuri told Arab News.

“To exploit rivers on such a large scale — it’s bound to cause destruction. And we can see this in this tragedy.”

These were the details of the news Indian village clings to hope after dam burst kills 32 for this day. We hope that we have succeeded by giving you the full details and information. To follow all our news, you can subscribe to the alerts system or to one of our different systems to provide you with all that is new.