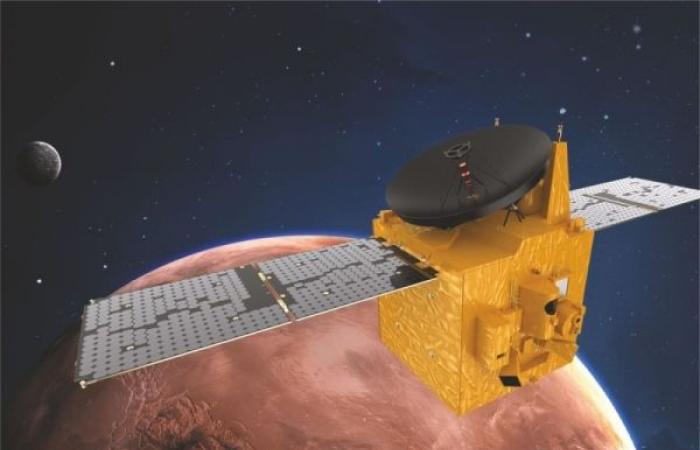 Ashley Strickland, space and science writer for the channel reported that the United Arab Emirates' first mission to Mars arrived at the red planet on Tuesday and successfully entered orbit on its first attempt.

When the spacecraft arrived, the Hope Probe marked the UAE as only the fifth country in history to reach the red planet and a first for the Arab world.

"The ambitions of the mission don't stop there," CNN reported.

The Canadian Broadcasting Corporation (CBC) broadcast the news with the headline "United Arab Emirates spacecraft, Al Amal, enters orbit around Mars in historic flight". It further said that it is "a triumph for the Arab world's first interplanetary mission."

The ground controllers at the Emirates's space center in Dubai rose to their feet and broke into applause, it added.

"The feat is monumental," the channel said, citing experts who estimated the chance of successfully entering Mars’ orbit at about 50 percent since more than half of all Mars missions actually fail.

It went on to say, that the crucial time window was "a terrifying and suspenseful 27 minutes".

Jonathan Amos, Science correspondent of BBC wrote, "Hope is regarded as a triumph for a small gulf nation that dared to think seven years ago that it could inspire the next generation by launching the first Arab interplanetary space mission."

He went on to say, that UAE scientists can now look forward to studying the planet's atmosphere.

The American media company, US News reported that the Mars program is part of the UAE's efforts to develop its scientific and technological capabilities and reduce its reliance on oil. The UAE Space Agency, the fifth globally to reach the planet, even has a plan for a Mars settlement by 2117.

This year marks 50 years since independence from Britain and the founding of the UAE federation, which groups seven emirates, including Dubai, it added.

The media company also mentioned Hazza Al-Mansouri, the first Emirati who flew to the International Space Station in 2019.

The Wall Street Journal wrote, "In a daring, high-speed swan dive from space, the first interplanetary probe from an Arab nation successfully entered orbit around Mars on Tuesday, a feat to be followed closely in coming days by ambitious missions to the red planet from the US and China."

Dawn, Pakistan's largest English-language daily newspaper, run a story under the headline 'UAE's 'Hope' probe successfully enters Mars orbit'. It said that through this mission UAE wants to serve it as an inspiration for the region’s youth.

The Indian media — print, online, and television — across this country prominently displayed the news that the UAE’s Hope Probe had reached the Mars orbit.

Malayala Manorama, the mass-circulation newspaper headquartered in Kerala state with editions also in major cities out of state, published two stories on the mission, one replete with technical details for science students and others with a scientific bent of mind. The second story carried the headline: "Historic moment for the UAE — Hope Probe enters Mars orbit."

The Indian Express in its "Explained" section of the newspaper began with the question: "What next for UAE’s Hope Mars Probe?" It went on to explain in considerable detail the road map of the mission with interesting details such as the difference between the earth’s calendar and that of Mars.

Hindustan Times, in its science section, prefaced the story with an explanation that it was detailing "all you need to know about UAE’s Mars mission."

These were the details of the news World media hails UAE's successful entry into Red Planet orbit for this day. We hope that we have succeeded by giving you the full details and information. To follow all our news, you can subscribe to the alerts system or to one of our different systems to provide you with all that is new.