Senators to hear opening arguments as Trump fumes over trial 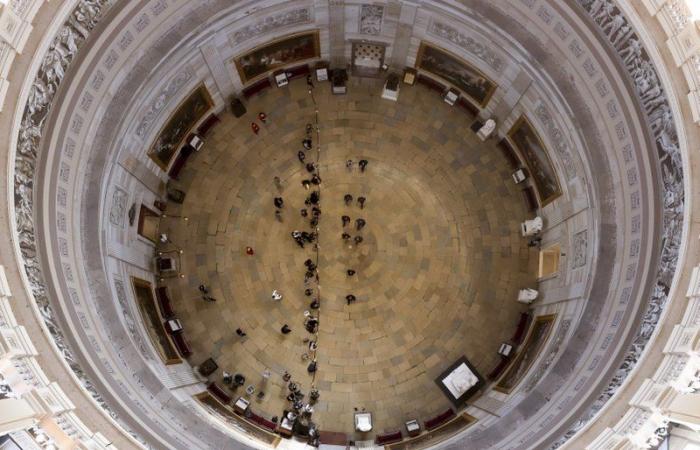 Mohamed Nass - Cairo - WASHINGTON (AP) — Opening arguments will begin in Donald Trump’s impeachment trial after an emotional first day ended with the Senate voting to hear the case for convicting the former president of inciting the riot at the U.S. Capitol even though he is no longer in office.

On Wednesday, House Democrats prosecuting the case and the former president’s attorneys will lay out their opposing arguments before the senators, who are serving as jurors. The defense lost the vote seeking to halt the trial on constitutional grounds, 56-44, leaving Trump fuming over his lawyers’ performance and allies questioning the defense strategy. Some called for yet another shakeup to his legal team.

House prosecutors on Tuesday wrenched senators and the nation back to the deadly attack on Congress, showing a graphic video of the Jan. 6 mob violence that stunned the the world as hundreds of rioters ransacked the building to try to stop the certification of Democrat Joe Biden’s victory. Five people died.

That detailed and emotional presentation by Democrats was followed by meandering and occasionally confrontational arguments from the Trump team, which insisted that his remarks were protected by the First Amendment and asserted that he cannot be convicted as a former president. Even Trump’s backers in the Senate winced, several saying his lawyers were not helpful to his case.

Senators, many of whom fled for safety themselves the day of the attack, watched and listened, unable to avoid the jarring video of Trump supporters battling past police to storm the halls, Trump flags waving. More video is expected Wednesday, including some that hasn’t been seen before.

The heavy emotional weight of the trial punctuates Trump’s enduring legacy as the first president to face impeachment trial after leaving office and the first to be twice impeached. While many minds are made up, the senators will face their own moment to decide whether to convict or acquit Trump of the sole charge of “incitement of insurrection.”

“That’s a high crime and misdemeanor,” Rep. Jamie Raskin, D-Md., declared in opening remarks. “If that’s not an impeachable offense, then there’s no such thing.”

Trump’s lawyers insist he is not guilty, his fiery words just figures of speech.

Security remained extremely tight at the Capitol, a changed place after the attack, fenced off with razor wire and with armed National Guard troops on patrol. The nine House managers walked across the shuttered building to prosecute the case before the Senate.

White House press secretary Jen Psaki said Biden would not be watching the trial of his predecessor.

“Joe Biden is the president, he’s not a pundit, he’s not going to opine on back and forth arguments,” she said.

With senators sworn to deliver impartial justice, the trial started with the Democratic House managers’ gripping recollections, as they described police officers maimed in the chaos and rioters parading in the very chamber where the trial was being held.

Trump’s team countered that the Constitution doesn’t allow impeachment at this late date. Though the trial now proceeds, that’s a legal issue that could resonate with Republicans eager to acquit Trump without being seen as condoning his behavior.

Lead defense lawyer Bruce Castor said he shifted his planned approach after hearing the prosecutors’ opening and instead spoke conversationally to the senators, saying Trump’s team would do nothing but denounce the “repugnant” attack and “in the strongest possible way denounce the rioters.” He appealed to the senators as “patriots first,” and encouraged them to be “cool headed” as they assess the arguments.

Trump attorney David Schoen turned the trial toward starkly partisan tones, saying the Democrats were fueled by a “base hatred” of the former president.

The early defense struggles also underscored the uphill battle that Trump’s lawyers face in defending conduct that preceded an insurrection that senators themselves personally experienced. Though they will almost certainly win Trump’s acquittal — by virtue of the composition of the Senate — they nonetheless face a challenge of defanging the emotion from a trial centered on events that remain raw and visceral, even for Republicans.

Republicans made it clear that they were unhappy with Trump’s defense, many of them saying they didn’t understand where it was going — particularly Castor’s opening. Louisiana Sen. Bill Cassidy, who voted with Democrats to move forward with the trial, said that Trump’s team did a “terrible job.” Maine Sen. Susan Collins, who also voted with Democrats, said she was “perplexed.” Sen. Lisa Murkowki of Alaska said it was a “missed opportunity” for the defense.

While the 56-44 vote affirmed the Senate’s authority under the Constitution to decide the case even after the president had left office, the total was still far from the two-thirds threshold of 67 votes that would be needed for conviction.

The six Republicans who joined with Democrats to pursue the trial was one more than on a similar vote last week. Cassidy joined Collins, Murkowski, Mitt Romney of Utah, Ben Sasse of Nebraska and Pat Toomey of Pennsylvania.

At one pivotal point, Raskin told his personal story of bringing his family to the Capitol that day to witness the certification of the Electoral College vote, only to have his daughter and son-in-law hiding in an office, fearing for their lives.

The House prosecutors had argued there is no “January exception” for a president to avoid impeachment on his way out the door. Rep. Joe Neguse, D-Colo., referred to the corruption case of William Belknap, a war secretary in the Grant administration, who was impeached, tried and ultimately acquitted by the Senate after leaving office.

If Congress stands by, “it would invite future presidents to use their power without any fear of accountability,” he said.

It appears unlikely that the House prosecutors will call witnesses, and Trump has declined a request to testify.

The trial is expected to continue into the weekend.

Trump’s second impeachment trial is expected to diverge from the lengthy, complicated affair of a year ago. In that case, Trump was charged with having privately pressured Ukraine to dig up dirt on Biden, then a Democratic rival for the presidency.

This time, Trump’s “stop the steal” rally rhetoric and the storming of the Capitol played out for the world to see.

The Democratic-led House impeached the president swiftly, one week after the attack. Of the five who died, one was a woman shot by police inside the building and another a police officer who died the next day of his injuries.

These were the details of the news Senators to hear opening arguments as Trump fumes over trial for this day. We hope that we have succeeded by giving you the full details and information. To follow all our news, you can subscribe to the alerts system or to one of our different systems to provide you with all that is new.