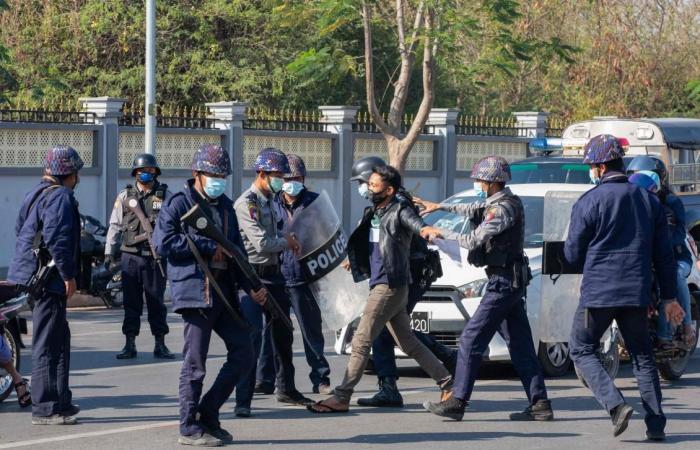 Jeddah - Yasmine El Tohamy - YANGON: Security forces fired rubber bullets and tear gas at anti-coup protesters in Myanmar on Tuesday as demonstrators around the country defied a military ban on rallies.
Protests erupted for a fourth straight day against last week’s coup to oust civilian leader Aung San Suu Kyi, as international condemnation of the putsch grew.
The rallies came despite a warning from the junta that it would take action against demonstrations that threatened “stability,” and a new ban on gatherings of more than five people.
In Naypyidaw, the remote capital purpose-built by the previous military regime, witnesses said police fired rubber bullets at protesters after earlier blasting them with water cannon.
“They fired warning shots to the sky two times, then they fired (at protesters) with rubber bullets,” a resident told AFP, adding that he saw some people injured.
It remained unclear how many people were hurt, as a hospital in Naypyidaw would not allow relatives in to see their family members, said Tun Wai, who rushed there when he heard his 23-year-old son was in the operation room.
“My son was shot when he tried to use the megaphone to ask people to protest peacefully after the police used water cannon to disperse them,” the 56-year-old goldsmith said.
“He got hit in the back... I’m very worried about him.”
In Mandalay, the country’s second-biggest city, police fired tear gas to disperse protesters.
After watching hundreds of thousands of people rally in opposition to last week’s coup, junta chief General Min Aung Hlaing made a televised speech on Monday evening to justify seizing power.
The first of a series of bans on gatherings in protest hotspots was also announced on Monday, as was a nighttime curfew.
But on Tuesday, fresh protests initially emerged in various parts of Yangon, including near the headquarters of Suu Kyi’s National League for Democracy (NLD).
The protesters carried placards some of which read “We want our leader,” in reference to Suu Kyi – who is currently detained by the military – and “No dictatorship.”
In Yangon’s San Chaung township, scores of teachers marched on the main road, waving a defiant three-finger salute that has become a signature gesture of the protesters.
“We are not worried about their warning. That’s why we came out today. We cannot accept their excuse of vote fraud. We do not want any military dictatorship,” teacher Thein Win Soe said.
In his televised address, his first since the coup, Min Aung Hlaing insisted the seizure of power was justified, citing the fraud claims.
The NLD won last November’s national elections by a landslide but the military never accepted the legitimacy of the vote.
Shortly after the coup, the military announced a one-year state of emergency and promised to hold fresh elections after that.
Min Aung Hlaing on Monday insisted the military would abide by its promises and reinstall democracy. He also declared that things would be different from the army’s previous 49-year reign, which ended in 2011.
“After the tasks of the emergency period are completed, free and fair multi-party general elections will be held according to the constitution,” he said.
But those pledges were accompanied by threats.
In the face of the increasingly bold wave of defiance, the military warned that opposition to the junta was unlawful.
In a statement read on state media, it said “action must be taken” against activities that threaten stability and public order.
New Zealand on Tuesday became the first foreign government to take concrete public action, announcing the suspension of high-level military and political contacts with Myanmar.
The United States has led global calls for the generals to relinquish power, and issued a fresh statement on Monday following the junta’s warnings against the protesters.
“We stand with the people of Burma and support their right to assemble peacefully, including to protest peacefully in support of the democratically elected government,” US State Department spokesman Ned Price said Monday, using Myanmar’s former name.
Price also said US requests to speak to Suu Kyi were denied.
Pope Francis on Monday called for the prompt release of imprisoned political leaders.
The UN Human Rights Council said it would hold a relatively rare special session on Friday to discuss the crisis.
Meanwhile, relatives of an Australian economic adviser to Suu Kyi said they were “distraught” over his detention.
Macquarie University professor Sean Turnell was the first foreign national confirmed arrested by the new junta.
Australian Foreign Minister Marise Payne has summoned the Myanmar ambassador over the case.

These were the details of the news Myanmar police fire rubber bullets at anti-coup protesters for this day. We hope that we have succeeded by giving you the full details and information. To follow all our news, you can subscribe to the alerts system or to one of our different systems to provide you with all that is new.